The RINA-classed newbuild honours the late Natale De Grazia, an Italian Coast Guard officer and environmental protection advocate. It is the first of the coast guard’s Angeli del Mare (“Angels of the Sea”) class of patrol vessels that were also designed to be the largest self-righting vessels to be built in Italy.

“The challenge for us was to design and build a boat with self-righting ability and unsinkability, which are operational requirements that have never been applied to a vessel of this size,” Intermarine told Baird Maritime. “Fortunately, we succeeded in this regard, and the vessel has been granted RINA’s ‘Self-Right’ and ‘Unsinkability’ notations.”

Natale De Grazia has a lightweight deep-V aluminium hull for increased manoeuvrability during both high- and low-speed operations, an LOA of 33.6 metres, a beam of 8.15 metres, a draught of 1.38 metres at full load, and a displacement of 150 tonnes. In addition to performing maritime security patrols, the vessel will also be used in search and rescue (SAR).

Because of its self-righting ability, the vessel can operate even under extreme weather and sea conditions, providing the coast guard with a significantly enhanced emergency response capability not possible with most other vessels of similar size. Specifically, Intermarine designed the vessel to be able to withstand conditions of up to STANAG scale sea force six and Beaufort gale force nine.

Natale De Grazia is powered by two MTU 16V2000 M96 main diesel engines that each produce 1,790 kW at 2,450 rpm. The engines drive a pair of Kongsberg Kamewa S71-4 steerable waterjets via ZF 5000 gearboxes to deliver a maximum speed in excess of 30 knots, or a range of more than 1,000 nautical miles at a cruising speed of 28 knots. The waterjets have also proven capable of bringing the 33-metre vessel to a complete “crash stop” within just one and a half boat lengths even from a speed of 30 knots.

The vessel also features an advanced command and control system to ensure effective operation even with a rather modest crew complement of 10. Another 190 personnel can be housed on board should the need arise, such as when accommodating a large number of rescued accident survivors. The spaces for additional personnel include a medical bay and a separate compartment with seating for up to 50.

The interior spaces including the accommodation areas were built with increased protection against the electromagnetic radiation being emitted by the vessel’s electronics suite, which consists of highly sensitive communications and navigation equipment. Also, to improve dynamic stability and the relative comfort of all on board, two electrically-controlled, curved-blade propellers installed on the bottom of the transom improve the manual control of the longitudinal trim. This system utilises an algorithm specially developed by Intermarine to provide active ride control even when sailing in rough seas.

A number of innovative features allow the vessel’s critical onboard systems to remain operational even in the aftermath of a capsizing.

“To guarantee the safety of the boat, the automation system, designed and developed by Intermarine’s own automation department, manages the capsizing phase with a constant and continuous acquisition of the inclination angle by means of a redundant sensor system with triplex architecture (i.e. three independent measuring systems of the same type.”

Intermarine went on to explain that this safety system will automatically close a select assortment of valves to reduce the risk of flooding in the engine room and other vital interior spaces that would otherwise suffer significant damage if submerged in water even briefly. This is in addition to the incorporation of watertight features throughout the rest of the superstructure including all openings (i.e. doors and windows).

“After the vessel rights itself, all engines and systems will be ready for restart within minutes.”

Another benefit of this automatic shut-off feature of the valves is that it will also significantly reduce the risk of diesel fuel, wastewater, and other potential liquid pollutants on board being accidentally spilled into the sea even after the vessel keels over.

“D-type fendering made of closed-cell PU foam has been fitted along the whole perimeter of the vessel,” Intermarine told Baird Maritime. “Besides ensuring safety when coming alongside other vessels, the fendering also provides reserve buoyancy in the event of flooding within the watertight compartment below the main deck.”

Natale De Grazia is also equipped with a stern-mounted crane with a lifting capacity of 0.5 tonnes to aid in SAR operations and a forward-mounted firefighting monitor with a flow rate of 75 cubic metres per hour.

The onboard systems draw electrical power from a pair of 85kW generator sets. 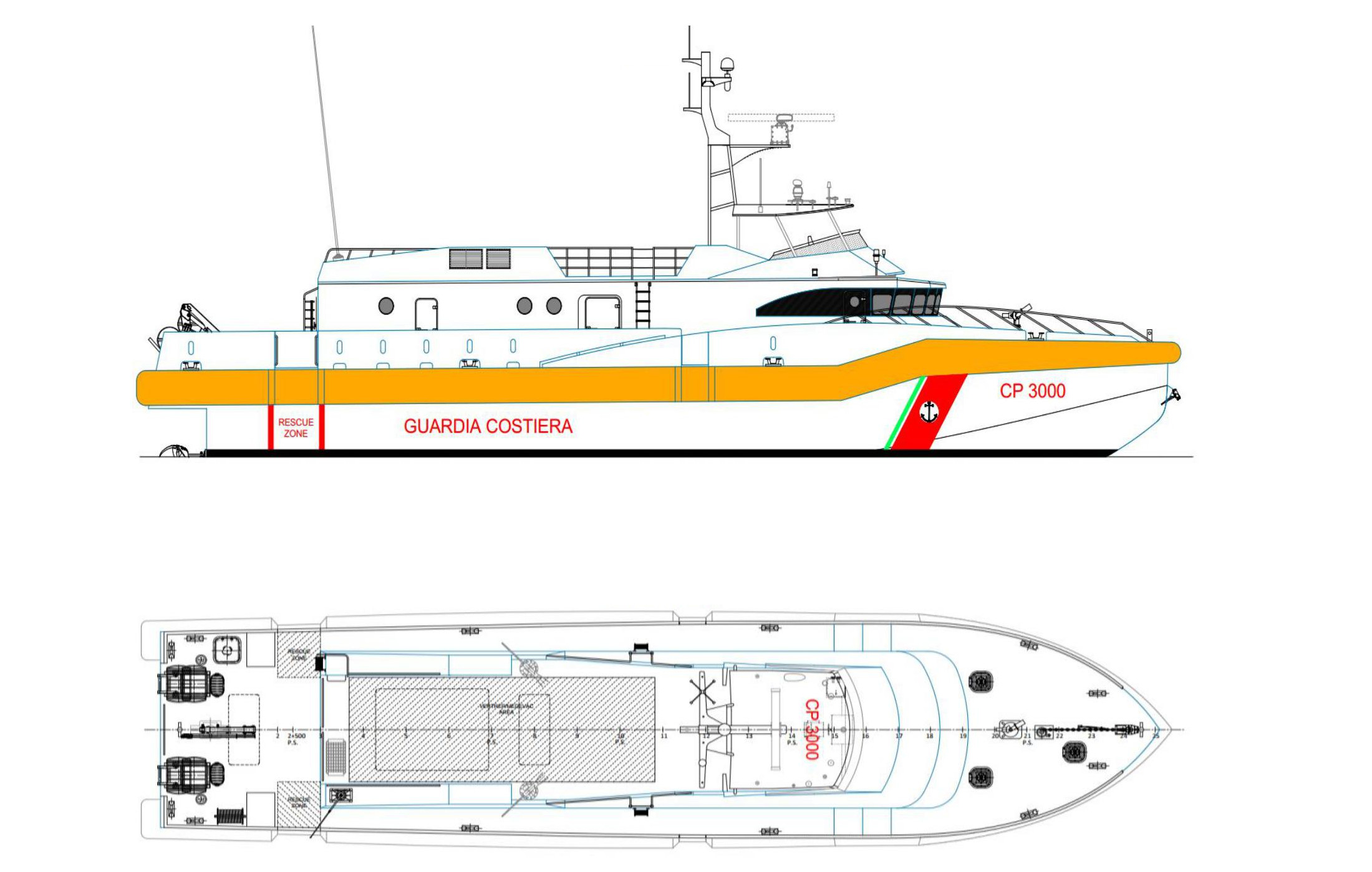