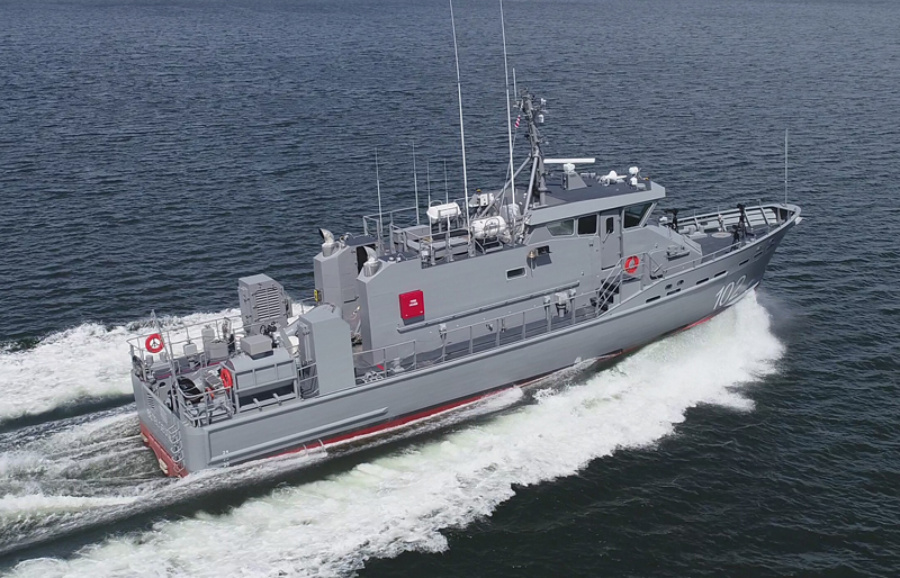 US shipbuilder Metal Shark Boats has handed over a new aluminium-hulled near coastal patrol vessel (NCPV) to the Dominican Republic Navy.

Christened Betelgeuse in keeping with the Dominican tradition of naming the country’s military vessels after constellations, the new patrol craft was built at Metal Shark’s Franklin, Louisiana facilities and then delivered as part of a US$54 million US Navy contract awarded in 2017. The contract had called for the manufacture of up to 13 such vessels for US partner nations in South and Central America, which also included Costa Rica, El Salvador, Guatemala, and Honduras. Under the same contract, Metal Shark will also provide the operating navies with crew training, maintenance support, and vessel equipment such as infrared cameras and other sensors.

Betelgeuse utilises a monohull design based on that of a 26-metre patrol craft originally developed by Damen Shipyards Group of the Netherlands but with additional features incorporated by Metal Shark to make it more suitable for near coastal patrols and other “green-water” navy missions. The new vessel is thus equipped for border patrol, maritime law enforcement and customs enforcement, counter-narcotics operations, and even non-combat roles such as search and rescue (SAR). 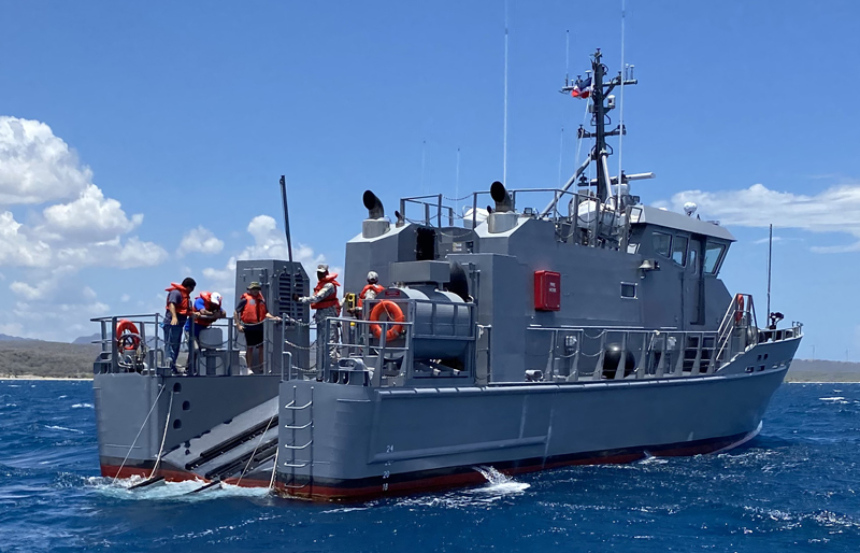 The NCPV has a length of 26.5 metres, a beam of 6.2 metres, accommodations for 10 crewmembers, a deadweight of 20 tonnes, and two examples of Caterpillar’s commercially successful C32 marine diesel engine with a rated output of 1,193 kW and IMO Tier II compliance certification. The engines are connected to a pair of Michigan Wheel propellers through Twin Disc MGX-6599 transmissions, and this configuration propels the vessel to speeds of up to 28 knots. Further, propeller tunnels have been integrated into the aft running surface to enhance efficiency, reduce draught, and mitigate noise and vibrations while the vessel is underway. 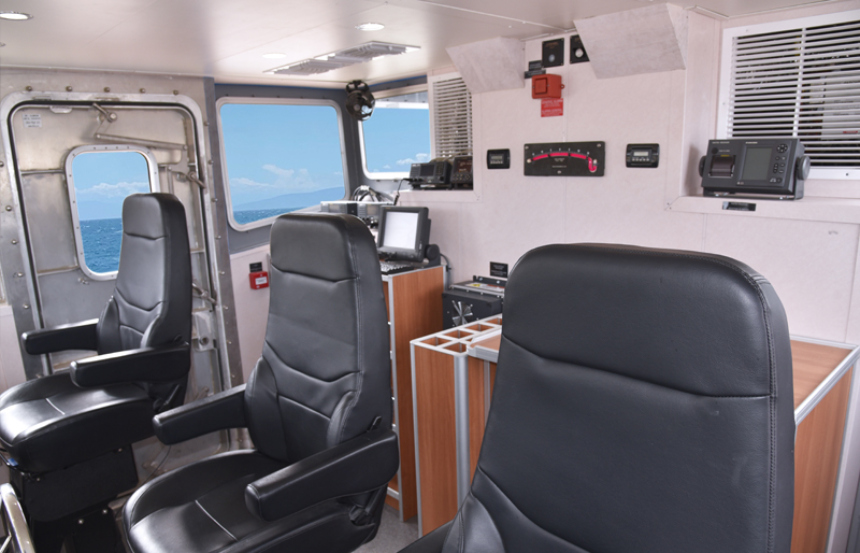 The NCPV has an elevated wheelhouse that affords excellent all-round visibility as well as climate-control features. One notable attribute of the wheelhouse is the use of pillarless glass that Metal Shark claims can help significantly reduce potentially dangerous blind spots, which are otherwise common on vessels with traditional wheelhouses. The NCPV’s wheelhouse is also ergonomically designed, thus allowing the crew to easily reach for all controls, navigation electronics, and communications equipment even with the fast pace of regular operations out at sea.

The hull features multiple watertight bulkheads and oversized scantlings throughout, and all integrated tanks and machinery are accessible via watertight manholes or access hatches. Crew safety is also a hallmark of the design as evidenced by the inclusion of wide, non-skid walkways that have low-level LED lighting for night missions as well as careful placement of all ladders, handrails, and grab handles. This would enable the crew to safely traverse the vessel, day or night, even in adverse weather conditions. 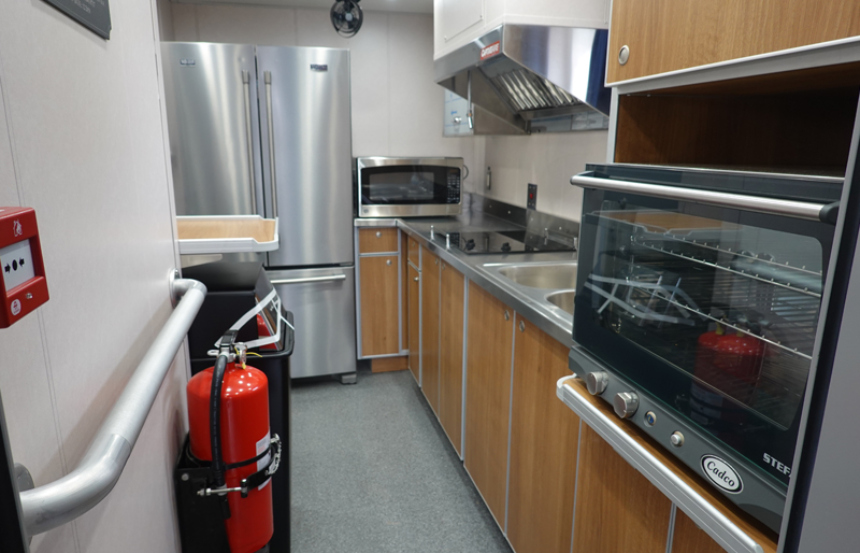 The crew accommodations include two dual-bunk officer cabins and a six-bunk cabin for the remaining personnel. The cabins are kept separate from the onboard operations areas, allowing crews to rest undisturbed in between shifts. Other amenities include two heads with one hot water shower each, a fully equipped galley, and separate mess areas.

Betelgeuse has also been configured to operate as a mother ship for one aluminium rigid inflatable boat (RIB), which had also been supplied by Metal Shark and is designed for interceptions, boardings, and insertion and extraction of special operations forces. The daughter craft has a length of 5.6 metres, space for up to 10 people, and two 37kW four-stroke outboard engines. It is to be launched and retrieved via a slipway integrated into the NCPV’s stern.

Lastly, Betelgeuse is also designed to perform limited cargo transport, capable of carrying up to four tonnes on its deck. 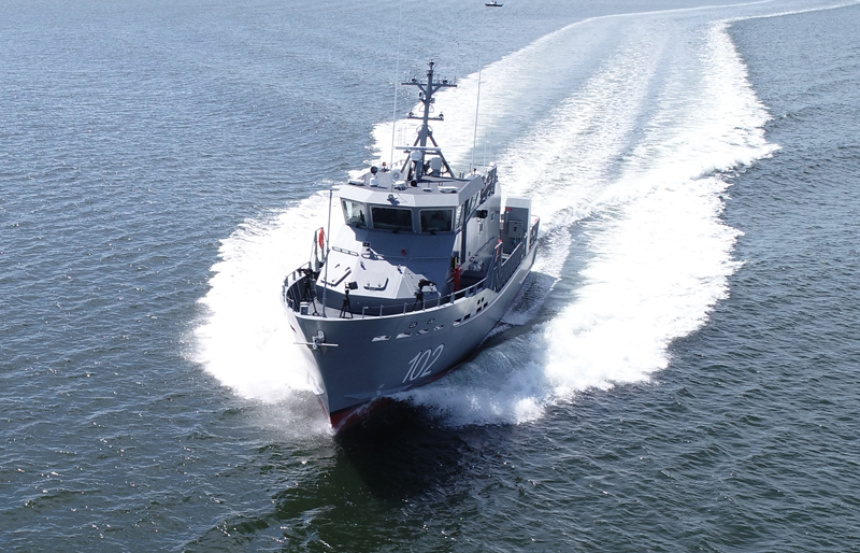