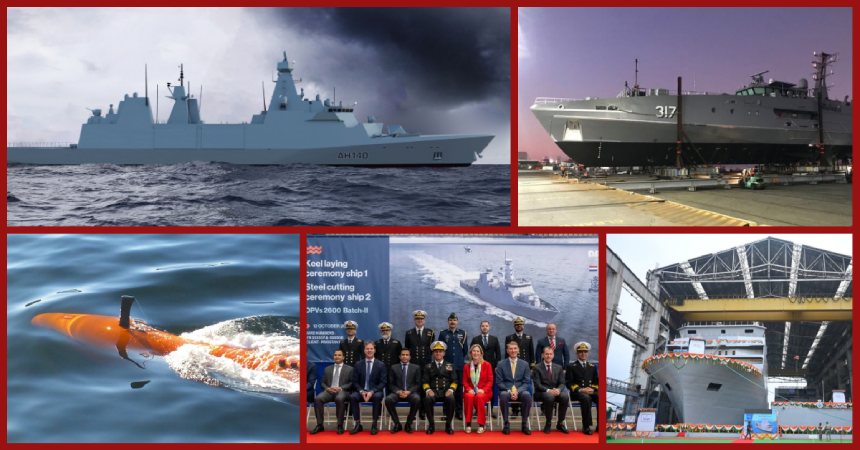 Newly launched naval vessels include an Australian patrol boat and two Indian diving support vessels that are also capable of rescuing submarine crews. Construction is underway on two patrol vessels for Pakistan as Poland places orders for unmanned craft to be used with a new class of minesweepers. Finally, the UK and Polish governments have agreed to collaborate on the acquisition of future multi-role frigates.

The vessel is built for sustained operations lasting a maximum of 28 days or covering a range of 4,000 nautical miles in conditions up to Sea State Four. Deck space will also be available for two small response tenders to conduct at-sea boardings and interceptions.

The ships will be variants of the UK-designed Type 31 frigate, which will be known in UK Royal Navy service as the Inspiration-class. Missions will include anti-submarine warfare, anti-surface warfare, anti-air warfare, and mine countermeasures.

Design work on the frigates will be provided by Babcock International.

The 118-metre-long vessels will perform missions including search and rescue (SAR) and extended patrols.

The vessels will also be equipped for rescuing crews of distressed submarines even while these are underwater.

Norwegian unmanned systems manufacturer Kongsberg Maritime and a Polish shipyard have entered into an agreement for the supply of new autonomous underwater vehicles (AUVs) to be deployed aboard the Polish Navy’s Kormoran II-class mine countermeasures (MCM) vessels.

Each of the unmanned craft will be fitted with sensors such as a synthetic aperture sonar, a forward-looking sonar, a multibeam echosounder, an ultra high-definition colour camera, and an international navigation system.

The AUVs will be delivered over the next four years to coincide with the MCM vessels’ official entry into service.

Damen Shipyards Galati in Romania laid the keel of the lead ship of a new series of 26-metre offshore patrol vessels (OPVs) for the Pakistan Navy on Wednesday, October 12.

The OPVs will also be used for counter-piracy and search and rescue missions within Pakistan’s exclusive economic zone.