Written by Trevor Hollingsbee on December 11, 2018. Posted in Ships (Naval).

Years of economic sanctions have proved to be a catalyst for Iranian self-sufficiency, not least in the defence sector. The Islamic Republic of Iran Navy (IRIN) is now reaping some of the rewards of this.

December 1 saw the commissioning of the newly built Iranian frigate Sahand, the latest warship of the Moudge class, which is derived from the UK-built Vosper frigates, supplied to the then Imperial Iranian Navy in the 1970s. Sahand, which had been under construction at Bandar Abass since 2010, is the third of class, after Jamaran and Damavand.

The profile of the new 1,400-tonne, 96-metre frigate differs somewhat from that of its predecessors, with the design of both the superstructure and funnel showing some stealth characteristics.

Four diesel engines, reportedly Pielsticks, enable a speed of 25 knots. Armament, for a vessel of modest dimensions is impressive. Four Qader anti-shipping cruise missiles, based on the Chinese Silkworm weapon, are fitted aft, and forward of the bridge are two launchers for Sayyad 2 air defence missiles, which are derived from the American Standard SM1.

Other armament consists of a 76mm gun, and two 20mm cannon, as well as six tubes for anti-submarine torpedoes.

Iranian-built air and surface search radar is fitted, and a Bell 214 anti-submarine helicopter can be operated, although there is no hangar.

According Iranian media reports, Sahand will very shortly undertake an operational deployment to the Indian Ocean.

A flurry of statements by senior IRIN officers in early December pointed to further additions to Tehran’s sea power. A fourth Moudge class, Dena, is reportedly due in service next year (intelligence reports indicate that at least three more of the class are in build). Senior officers also stated that Damavand, seriously damaged earlier this year in a collision with a jetty in the Caspian Sea , is under repair, and that development of a trimaran frigate is at an early stage. 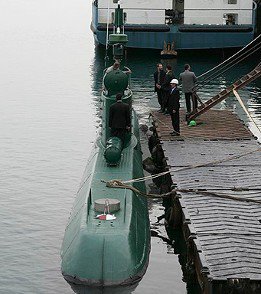 They said furthermore, that two more indigenous Ghadir coastal submarines were very recently delivered to the service, and that another, larger, Fateh-class submarine, also locally built, will shortly be commissioned. IRIN is believed to have a total of about 12 subs in service.

While Iranian naval capabilities fall well short of those of leading western navies, IRIN has won some international recognition, particularly as the service, unlike other regional navies, regularly undertakes long range deployments, and has indigenous submarine construction capability.

The advance of Iranian sea power comes at a time when both the Royal Saudi, and UAE Navies are growing in confidence and ability, after some years of active service off Yemen, and the Israeli Navy is undergoing unprecedented expansion, including the commissioning of new classes of highly advanced, German-built, corvettes and submarines.

The scene would therefore seem to be set for long term naval rivalry in a region already beset with maritime tensions.