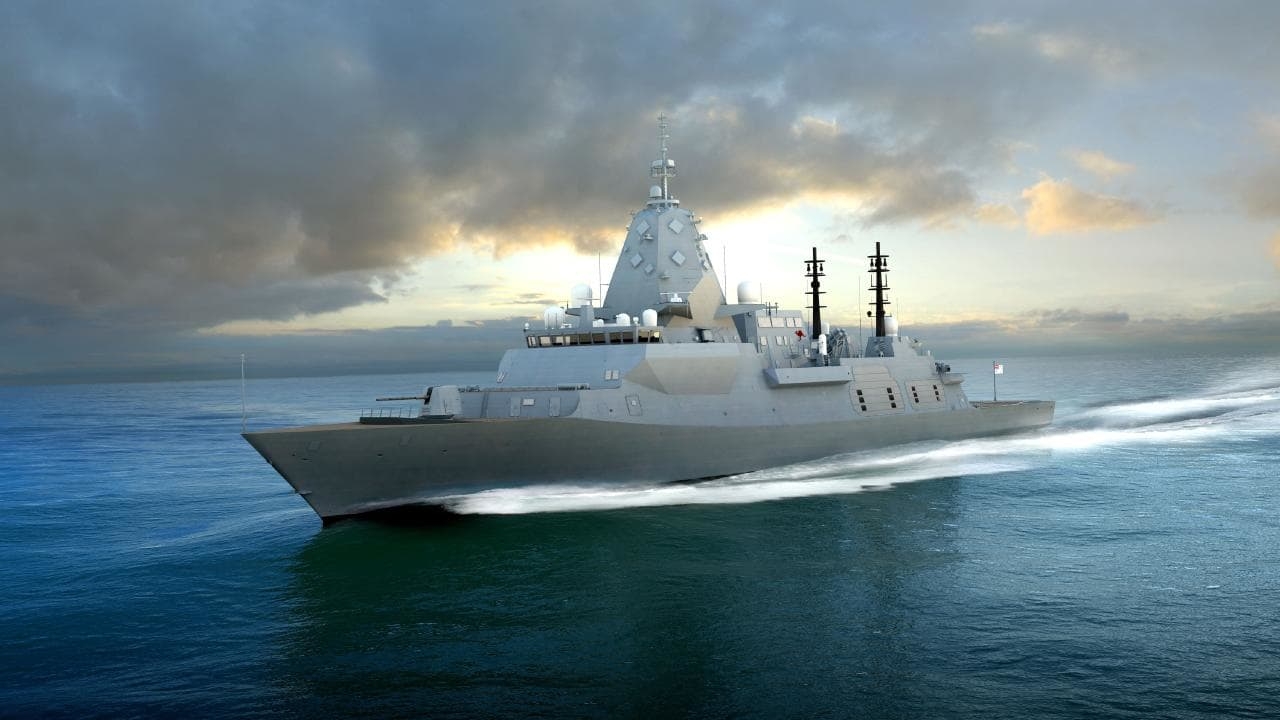 To provide context for the recent frigate announcement, we asked the Naval Studies Group at the Australian Centre for the Study of Armed Conflict and Society at UNSW Canberra to provide an overview of the roles the vessels will undertake. The following piece is excerpted from a longer paper, available here.

When the future frigate program is finished, its nine Hunter-class vessels will be Australia’s largest fleet of big warships. So they’re likely to be involved in every type of maritime activity the Royal Australian Navy undertakes, from warfighting in an Australian or coalition task group, to independent maritime security operations and diplomatic visits.

The chosen design is focused on the core task of anti-submarine warfare, but it has capability across warfare disciplines and the full spectrum of operations that Australia requires its navy to undertake.

The most demanding role is likely to be warfighting as part of an Australian task group, operating in a contested environment against a capable opponent and engaging in multiple concurrent activities, such as theatre anti-submarine warfare, information warfare, integrated air defence and amphibious operations.

The future frigate will be expected to be able to contribute to the air surveillance task (it will have a version of the Australian CEA radar), to defend itself against attack by aircraft and missiles, and to act as a goalkeeper or close-in escort for high-value units such as the RAN’s amphibious assault ships and auxiliary oil replenishment ships against such threats from the air. And it will also be expected to be able to play a similar role as part of a combined task group when operating with American or other coalition forces.

Fortunately, Australia’s frigates have been called on to conduct or prepare for only a few warfighting operations in recent decades: the 1991 and 2003 Gulf Wars and East Timor in 1999. But there’s a constant demand for constabulary and diplomatic operations, ranging from counter-narcotics operations in the Caribbean and arresting illegal foreign fishing vessels in Australia’s Southern Ocean exclusive economic zones off Heard and MacDonald Islands, to search-and-rescue operations throughout Australia’s area of responsibility.

In a diplomatic role, Australia’s frigates have visited allies, neighbours and partners in Asia, the Middle East and occasionally Europe, Africa and the Americas. The consistent theme is that a frigate is (and must be) effective in situations where the circumstances are difficult enough that no other arm of government can operate.

Australia’s most enduring maritime security commitment has been patrols in the Red Sea, Arabian Gulf, Gulf of Aden and Northeast Indian Ocean. Since 1990, Australia’s frigates have been part of United Nations efforts to enforce sanctions against Iraq, anti-piracy operations to protect international maritime trade and, more recently, counter-narcotic operations targeting terrorist funding networks. The deployments have routinely been for six months or more.

For most of the past two decades, sustaining the Australian commitment to have a frigate on station has required three or four frigates at various stages of maintenance, training and deployment. To maximise the time available for operational output, the future frigate will need to be as efficiently maintained and upgraded as possible. Keeping the future frigate combat-ready will also require enduring integration with the national naval enterprise to enable rapid incorporation of technological improvements.

The current frigates have also been involved in security operations around Australia’s maritime approaches. While patrol boats and, in future, the offshore patrol vessels, will remain the mainstay of this work, a future frigate will still need to be able to conduct such operations, particularly when they need to be sustained over long periods of time.

That means the future frigate will need to have a high level of endurance, which will be achieved by designing in and providing for a combination of steaming range, consumable stores such as food, and sufficient crew to operate effectively in demanding circumstances over extended periods.

The larger hull planned for the future frigate by comparison with its predecessors will make it possible to have a wider operational envelope, particularly for air operations, which will also confer improved warfighting capabilities. The generally improved seakeeping of a larger vessel will also allow it to operate in the Southern Ocean if required.

The search-and-rescue operations in the Southern Ocean (HMAS Darwin in 1994–95, HMAS Adelaide in 1997, HMA Ships Perth and Toowoomba in 2014) and the patrols for illegal foreign fishing vessels  (HMAS Anzac in 1997 and HMAS Canberra in 2002) are further examples of the operations Australia’s frigates have undertaken. At the time, the frigate was the only option available to the Australian government that combined the availability, endurance, speed, capacity to use calibrated levels of force, and seakeeping ability to operate in some of the roughest oceans in the world.

While large civil patrol vessels are now available in the Australian Border Force, they lack significant warfighting capabilities, so a future frigate will still be required to have the ability to be safe and effective in rough conditions to provide the full range of surface response options.

Frigates have also been used when diplomatic initiatives needed to be conducted in a safe, neutral environment. In that context, HMA Ships Sydney and Newcastle contributed to the peace negotiations in Solomon Islands in 2000, providing a sovereign Australian venue (and an imposing physical presence) proximate to another country.

Innovative and imaginative use of spaces (flight decks, hangars and cafeterias) allows a frigate to be an effective agent of the Australian government’s diplomatic engagement. It also enables a frigate to contribute to humanitarian and disaster relief, as HMAS Darwin did in 2016 after New Zealand’s Kaikoura earthquake and HMAS Swan in the Philippines in 1991.