Australia’s planned offshore patrol vessel procurement, known in local government and contracting circles as SEA 1180 has gone through a selection stage with a modified version of Lürssen’s OPV80 being eventually selected.

The current price tag is AU$4 billion (US$3 billion) for 12 ships but this undoubtedly will rise, significantly if Royal Australian Navy procurement history is any guide. The aim of the project is to combine the rather varied missions of patrol, mine warfare and hydrographic survey into a single platform. Should it actually be called a multi-mission corvette?

With so many missions being conducted concurrently, isn’t it likely that things will slip through the cracks? The crew will be certified to operate the myriad tools and sensors at their disposal but will they be proficient in their use?

Which brings me to one of the most frequent criticisms of the Littoral Combat Ships (LCS) of the US Navy, that they are a jack-of-all trades but a master of none. Will operating three different missions from the one platform actually save money?

To paraphrase Dr Malcolm from Jurassic Park, the navy became so caught up with buying what they could, they forgot to think if they should.

So we have an ~80-metre patrol boat hull worth several tens of millions of dollars that has hundreds of millions of dollars of radars, anti-submarine sonar and the weapons to match. At what point do we decide that the cost effectiveness of the whole thing is a farce and that the same amount of money spent on one vessel could build a fleet of less-capable, but more effective craft. Ten boats with cannon and machine guns can patrol a greater area than one vessel with a radar and supersonic missiles.

This new miniaturisation of equipment isn’t a bad thing, it just needs to be applied rationally and appropriately. Why not have an 80-metre air-warfare vessel? Why not have an 80-metre sub-chaser? The blending of the missions is where it is most likely to fall down, as has been seen with the LCS which has effectively thrown away the idea of multiple mission sets and decided that certain boats will permanently perform certain missions. Even using a common hull isn’t a bad thing. 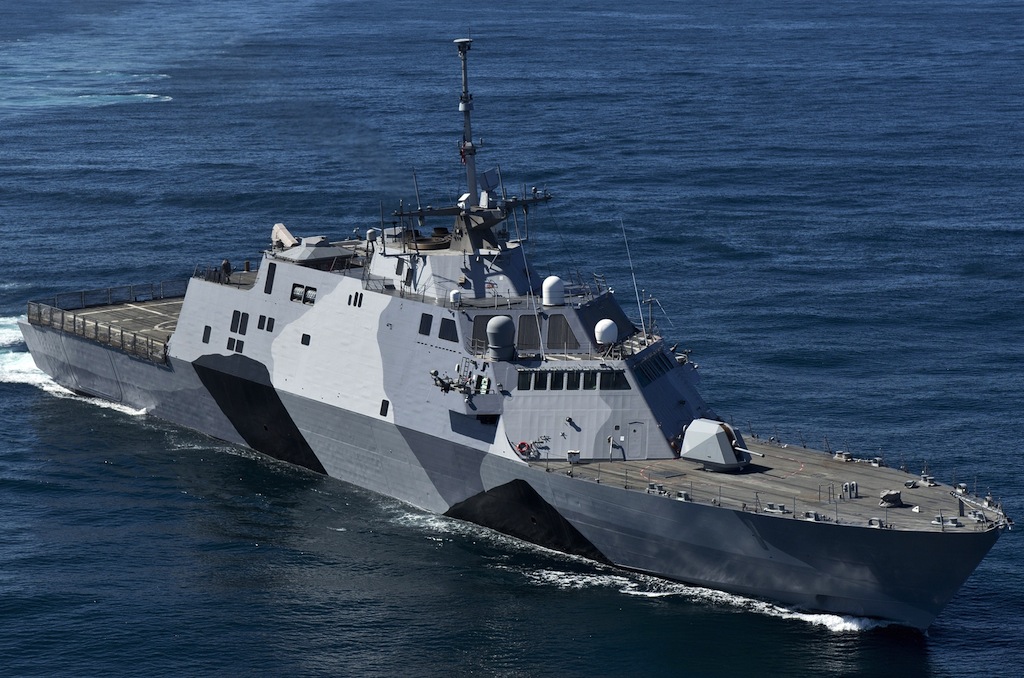 The OPV80 is a long range platform with plenty of deck space and could easily be suited to the three missions if they were in fact dedicated missions. Relatively minor modifications would be needed to the base hull to more effectively specialise vessels to their respective missions.

The patrol variant would be equipped with a standard load of boarding RIBs and machine guns and perhaps a small cannon.

The OPV80 can accommodate Exocet anti-ship missiles however in reality, if an anti-ship missile were really needed then a frigate or destroyer, or even a land-based attack aircraft would have been called in to deal with the threat. A patrol boat’s mission is to patrol. It is not a destroyer.

For the minesweeper variant the boarding RIBs could be replaced with unmanned surface vessels (USV) that tow the various arrays needed to find mines. Very similar USVs would be operated by the hydrographic survey variant and so there could be some crossover between crew training here, especially with regards to the deploying and operation of these units.

Whether or not a cannon even needed to be installed on these variants is debateable. Does the relatively low cost of purchasing a 40mm cannon offset the additional training, logistics and security requirements of having such a weapon aboard?

The OPV80 is fitted with a helicopter deck for semi-embarked operations but the value of a helicopter is greatly debatable what with the multitude of unmanned aerial vehicles that are now available and that take up a fraction of the space aboard.

Some of these UAVs can outfitted with surface scanning radars that can greatly extend the “visual” range of the mothership. For the mine-sweeper variant of the hull the UAVs can be equipped with magnetic and gravity anomaly detectors and will be able to sweep vast swathes of ocean faster than the ship itself.

A common hull would allow for common training of engineering and deck crew with the specialised training being reserved for those crewmembers that are focused on the mission. The common hull should, in theory, simplify maintenance and logistics however history has not always been kind to this way of thinking, the Joint Strike Fighter is a fair example of this thinking not entirely working.

Should the Royal Australian Navy stick to its multi-mission dream, or should it face reality and specialise?