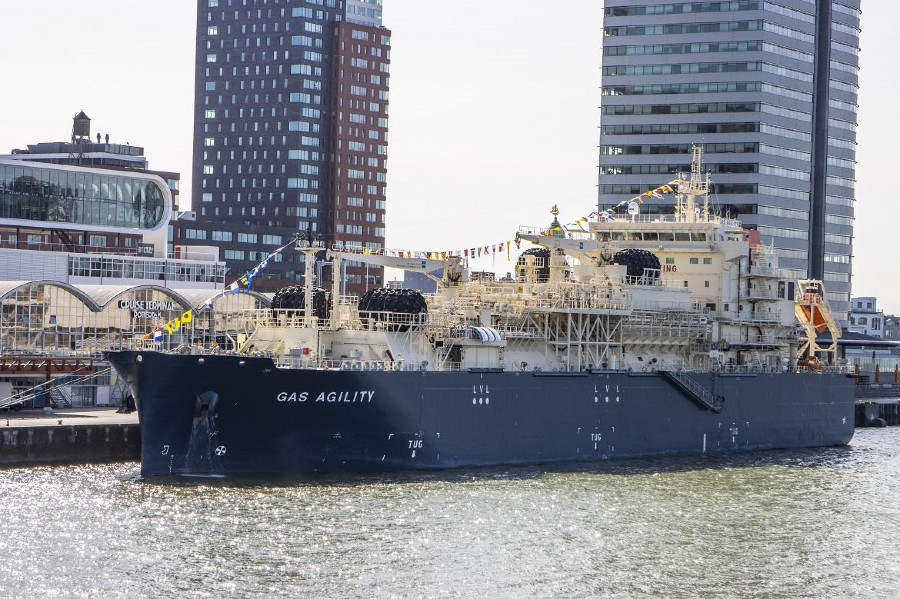 Powered by a diesel-electric propulsion system, the Bureau Veritas-classed newbuild also has the distinction of being the largest LNG bunkering vessel yet built with an LOA of 135.5 metres, a moulded beam of 24 metres, a summer deadweight of approximately 9,000 tonnes, and a total cargo capacity of 18,600 cubic metres. Since the initial main role of the vessel is to supply the fuel to be used by the new class of nine LNG-powered, 23,000TEU containerships operated by France’s CMA CGM – and to do so at the unprecedented rate of around 300,000 tonnes of LNG per year over a period of 10 years – the increased cargo-carrying and bunkering capacities were deemed necessary.

Gas Agility is the first in a series of two ships to be constructed for Emerald Green Maritime at the Jiangnan facilities of Hudong Zhonghua Merchant Marine Mitsui, a company jointly owned by MOL and China’s Hudong Zhonghua Shipbuilding. The builder claims that, in spite of its size, the ship possesses remarkable manoeuvrability thanks to azimuth propellers. These will enable it to safely navigate within the restrictive ports in Northern Europe where CMA CGM’s mega-containerships are expected to regularly call.

The ship’s cargo tanks were all supplied by France’s GTT. These utilise a patented membrane containment and insulation system directly supported by the ship’s own hull structure to help withstand sloshing impact. Under this system, each tank is composed of a thin, primary corrugated stainless steel membrane, positioned on top of prefabricated insulation panels, including a complete secondary membrane made of composite material. This technology will allow for the safe transport of LNG at temperatures as low as -135 degrees Celsius.

However, should there be instances of boil-off wherein unavoidable warmer temperatures inadvertently cause the evaporation of some of the LNG in the cargo tanks, Gas Agility is equipped with a complete re-liquefaction system that redirects some of the boil-off gas and converts it back into liquefied form. This “re-converted” LNG may then be used to power the dual-fuel generator set that supplies electricity to the onboard systems as well as the ship’s own electric motors to help limit diesel fuel consumption and reduce emissions.

Bureau Veritas commented that the transfer systems and cargo pumps installed on board are designed for maximum efficiency, ensuring the delivery of the total LNG cargo in less than 12 hours. This is a major benefit for vessels, especially large vessels that would otherwise have to remain in port for longer periods to undergo refueling. The classification society had also conducted hazard identification (HAZID) and hazard and operability (HAZOP) analysis for the LNG transfer system to define safety zones in ports where transfer operations may be conducted.

Based in Rotterdam, Gas Agility sails under the Maltese flag and is being operated jointly by MOL and Gazocean, an LNG transportation specialist based in Marseille. The newbuild has already begun serving a long-term time charter contract that MOL had signed with Total Marine Fuels Global Solutions (TMFGS), Total’s worldwide bunkering services affiliate, in February 2018.

A similar long-term contract was agreed upon by MOL and TMFGS less than two years later for the ship’s yet unnamed near identical sister, which is currently under construction at Hudong Zhonghua’s facilities in Jiangnan. However, unlike Gas Agility, the second vessel will be positioned in the Marseille-Fos area to serve CMA CGM’s containerships in major ports within the Mediterranean.