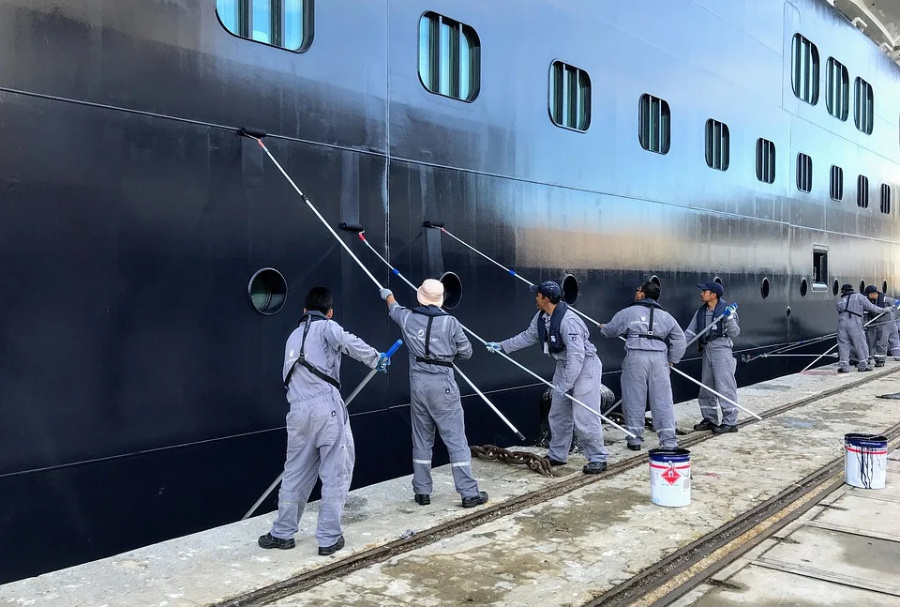 I was looking at a photo of a research ship back from a voyage to the Polar regions, although you wouldn’t have known it from the pristine state of the hull. There was scarcely a blemish on a hull that had been crunching through thick ice for several months, a tribute to the amazing non-abrasive hull coatings that had been applied to the vessel.

Coatings have come on a long way in recent years. When I think of paint, I remember the end of a drydocking in a northern shipyard, watching a gang of painters sloshing boot topping around our hull, as the rain teemed down. Dressed in their filthy oilskins and clearly on a job and finish, their brushes held as much rainwater as paint and the solution, rather than adhering to our hull, was just running down to the bilge keel in runnels, where it fell into the noxious mixture at the bottom of the drydock.

It would be back to bare metal when we got to the other side of the world and could repair the damage and I tentatively asked the foreman whether he thought that it might be better to wait until the weather moderated. He looked at me as if I was mad. The paint had been paid for. The dock was flooding in a few hours and it had to go on!

“Today, just as then, you get what you are prepared to pay for.”

We were quite proud of the look of our ships and vast quantities of paint and overtime were expended by our large crews to keep them pretty, both on deck and over the side, and the reputation of the mate rested largely on the vessel’s appearance as we arrived on the coast, and at the home port. But compared to the amazingly sophisticated coatings of today, our efforts were pretty primitive.

I can even recall being asked by a sadistic examiner for my mate’s orals how you made white paint; something that cheapskate tramp operators were still doing in those days. He knew, the blighter, that I would never have done such a thing on our ships, where we bought paint by the can, rather than its constituents. The answer, if I remember, (because I had mugged up on this subject) involved certain measurements of white lead, tallow, and colza oil, whatever that was. But today, just as then, you get what you are prepared to pay for and if you buy the best coatings that money will buy, you will get something really special.

Applied by technologists, rather than grubby painters or slovenly seamen, to perfectly prepared surfaces, under the optimum climatic conditions, with the expert supervision of an eagle-eyed coating chemist, closely monitoring the operation, it will produce something that will make regular painting redundant. If you have ever wondered why the term “painting the Forth Bridge” is no longer an expression denoting unending labour, it is because that magnificent monument has had one of these amazing coatings, which will last for years, applied all over its spectacular structure.

“The research to make better coatings to fulfil the exacting demands of ship owners is a perpetual struggle by the manufacturers.”

I don’t normally “name drop” but I remember walking up the accommodation ladder on HM Royal Yacht Britannia – for lunch if you really must inquire – and being so lost in admiration at the silky-smooth side of what was then a forty year-old ship, that I nearly fell in the Thames. I asked a rating how they managed such a finish, but he said it was a State Secret.

The research to make better coatings to fulfil the exacting demands of ship owners (“better but cheaper” is their constant but unrealistic demand) is a perpetual struggle by the coating manufacturers. Nowadays it is probably all undertaken in laboratory conditions, but it used to be the case that manufacturers would persuade owners to “road-test” their new paint on normal voyages.

I recall, when working at the Chamber of Shipping shortly after I had come ashore, being sent up to the Tyne to witness some experimental coatings that had been trialled on a tanker. The ship was in drydock, and had clearly been there for some time, to judge by the chaos and the paint test panels had been assembled on the monkey island atop the wheelhouse, where they had been for a couple of voyages out to the stifling heat of the Gulf. Accompanied by a rather better informed scientist from the nearby research station, we arrived on site, to discover that a large number of enormous herring gulls had found the test panels a peaceful and perfect perch and according to the scientist, had rather spoiled the laboratory conditions of the experiment, with their lavish fouling.