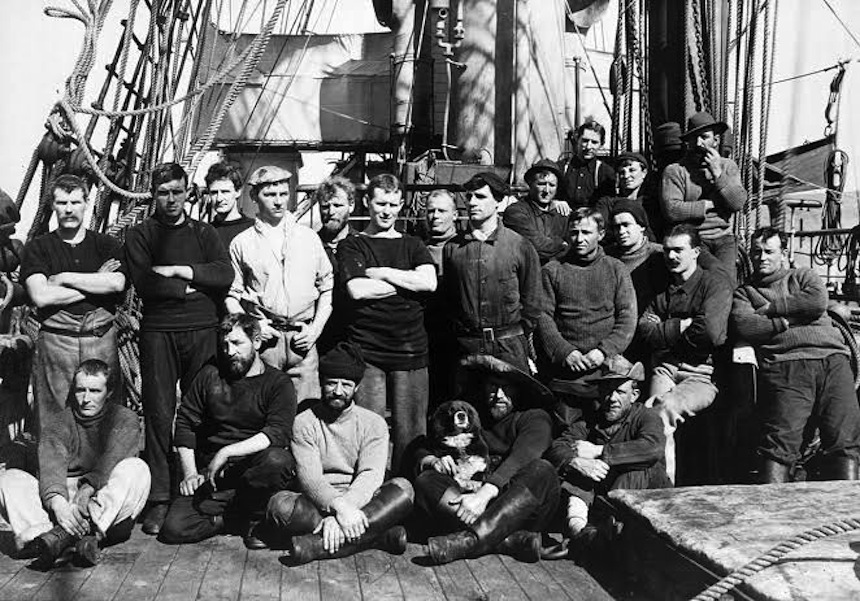 You get the impression, talking to contemporary seafarers, that their voyages never actually end. I’m not suggesting that they are like the Flying Dutchman, doomed to circumnavigate the world for ever, but rather that they get on and off their ships at the conclusion of their tours of duty, wherever the ship might be, while the voyage continues with their replacements.

That, I suppose, emphasises the usefulness of the great iron bird that facilitates this way of changing crews, without fuss or inconvenience to the business of the ship itself.

But you might wonder whether something has got lost in this modern method of ship and crew management. A deep-sea voyage was once just that; something that was perhaps limited by the length of the articles of agreement between master and crew, in my day two years, although the length of our voyages to the far end of the earth varied from four months to something well over a year.

But a voyage had a “number”; it had a beginning, an outward passage, a coastal period and then, if you were lucky, you were homeward bound. It began at the shipping office, where the crew signed on and concluded when the ship was back in home waters, when they were once again free agents. It was an entity, a period of one’s life – a bit like a gaol sentence if it was an unhappy ship – but a set programme that you had no real hope of influencing, so you were well advised to make the best of it.

Do modern seafarers, who are apparently afflicted by loneliness as they rattle around in their huge ships, still suffer “channel sickness” as their tours approach the end and they look forward to a relief at the next port? “The Channels” it was termed and it was an affliction that affected your behaviour with the ship well into her homeward passage, and the end of the voyage in sight.

It manifested itself in a sort of lightness of heart, levity where once there would have been professional solemnity. You could count the days to the voyage’s end, to the payoff table, to go home on leave and a period not dictated by watches, or the demands of the ship.

“The Channels” affected your behaviour in other, more subtle ways. The shipmate, whose habits or behaviour you had found really quite irritating during recent months, suddenly was really not such a bad chap – you only had to get on with him for x number of days. The Mate didn’t seem quite such a fanatic, and the Master was not the unreasonable old nuisance he had appeared to be throughout the voyage.

The sun seemed sunnier, the stars brighter, the beer colder and the food not quite so monotonous. You caught yourself laughing uproariously at jokes that weren’t even slightly funny when you heard them before. Even the bad weather that was slowing you down was something not to be distressed about – “more days – more dollars” was the philosophic view of the delay.

The voyage would soon be over. A rather nice poem in the 1960s by seaman Vivian Griffiths summed it up beautifully – “There’s a spark in the stoical eyes/ Of the scaly-backed salts in the crew”, he suggested in his Channel Fever, published by the Marine Society.

The symptoms worsened as the distance between you and the first home port reduced. Would there actually be a relief, you wondered, or did the office want you to be the muggins to coast with the ship until the discharge was completed.

They liked to keep a few people from the deep-sea voyage because they were familiar with the ship, and who could be blamed by the coasting crowd and the office, when it was discovered that something was broken in the engine room, or some of the cargo was not where the cargo plan said it was to be found.

That would be a surprise bit of news that would come on board with the pilot, who would board us off Start Point en route to the Thames or Point Lynas, if we were Mersey bound, and the end of the voyage was only hours away.

The pilot would probably bring the mail, and besides the orders, would retail the latest company scandal that would flash through the ship with the speed of lightning. And then, with a flurry of tugs and locks and half-tide basins – “keep her off the knuckle Harry!” – it was all over. Finished With Engines, was rung for the final time, to conclude the voyage.

There would be superintendents, even a few directors, to prowl around and criticise the appearance of the yacht-like ship, while complaining about the overtime bill. Time to pack, to pay off, to look at train timetables, share a taxi, wonder what the leave would bring.

Then you were home, conscious of your bronzed appearance in the dead of winter; unusual and making you stand out, before the days of packaged holidays. “When are you going back?” somebody would inevitably ask. Vivian Griffiths again –“Everything seemed unreal/Somehow it all fell flat.”