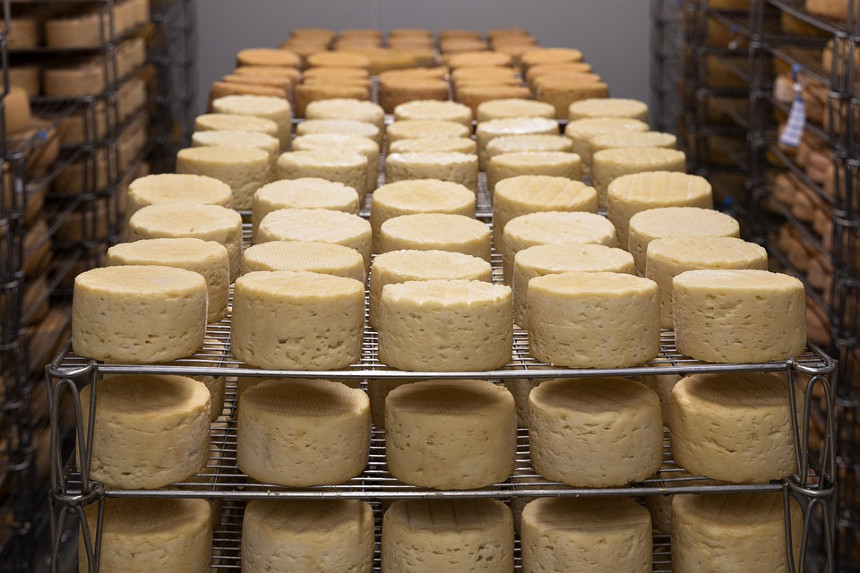 What a lot of effort we used to go to as we made sure your foodstuffs sourced from the far side of the world arrived in tip-top condition! Nowadays it is all shovelled into a container and nobody aboard ship knows anything about the particular needs of the cargo. In the old Commonwealth refrigerated cargo liners (the term “reefer” was never used), these were genuine dual-purpose ships, carrying an outward general cargo which consisted of pretty well everything Australians and New Zealanders wanted to buy.

Then, with the outward cargo landed, there was a frantic week’s work to prepare the holds and lockers for a frozen or chilled cargo to nourish the hungry northern hemisphere. All these spaces had to be carefully cleaned, before armies of carpenters got to work with thousands of feet of new dunnage to fit out our holds for the meat or dairy produce, apples or cheese that would be loaded in half a dozen ports on the coast. It was like watching a gigantic work of art take shape as the chippies fashioned the vast quantities of  six- by one- and three- by three-inch timber into intricate staging that squared off our curved bilges and internal spaces, to provide a good airflow around the cargo.

Then, with the debris and sawdust all cleaned up and the surveyor signing off the spaces as fit to load, the chief freezer would spring into action and freeze the holds down to the required temperature to keep the cargo content for the next month or so. At this stage maybe we ought to introduce the chief refrigeration officer, his assistant the second freezer and on the homeward voyage, a third seconded from among the junior engineers. Maybe they drew lots to select him.

“Looking back on the man-hours spent keeping these old ladies in service, you sometimes wonder why they bothered to keep them going.”

The freezers were distinguished from the other engineering staff by the extraordinary whiteness of their boiler suits, appropriate to their function of cleanliness and cargo care. The refrigerating machinery lived in its own flat below the main deck; all gleaming compressors and pumps, barely a trace of oil or grease and the consumer of vast quantities of brass cleaner. On the outward passage, the two freezers would overhaul their equipment, but in such a leisurely fashion that there was plenty of time for deck sports and sunbathing, while their engineering colleagues sweated in their noisome and noisy tasks. Chief freezers always won the deck golf competition, largely because of their extensive practice time.

Our older, pre-war tonnage was a bit of a nightmare for the freezers as the holds were kept cold by hundreds of feet of brine pipes that wreathed the bulkheads in huge grids with portable pipework plugged into the hatchways between the various decks. Insulated plugs had to be manhandled into the spaces between the insulated hatch beams, sealed with great rolls of sticky tape and covered with several inches of sawdust. Newer ships used cold air pumped around their insulated spaces, with nice clean bright metal bulkheads, and the final luxury of hydraulically closed tween-deck hatches.

Looking back on the man-hours spent keeping these old ladies in service, you sometimes wonder why they bothered to keep them going. I never verified this but it was said that during the war, when Britain was running short of  butter they managed to carry the stuff in non-insulated holds by freezing it hard before loading and surrounding it with about three feet of packed sawdust. It was said that only the outer layers were rancid by the time the ship, which had run like the clappers through the tropics, arrived in Blighty.

“…the clean, meaty smell of a hold full of frozen lamb gave you an appetite for lunch.”

It is sad, but the modern reefer container ship seafarer will never experience the delight of inhaling the aroma, surrounded by a thousand tons of cheese or the equable climate of an apple hold on a hot day. After a hard night on the coast, there was nothing more restorative, while the clean, meaty smell of a hold full of frozen lamb gave you an appetite for lunch. We sometimes carried chilled beef in carcase form, all swinging from hooks in our lockers, which were loaded in the clinical cleanliness you would associate in an operating theatre, the wharfies all masked and gowned. It was said to be a difficult cargo as it could only be kept chilled for six weeks, so any delays would be critical on the homeward passage.

Butter was a cargo that made the mate happy, as couple of thousand tons of best Anchor in the lower holds would greatly assist with the homeward stability calculations. Carcases, in the days before boxed meat, involved a lot of broken stowage in the air that was inside the frozen lambs. Cheese was invariably cheddar, each crate containing two huge rounds of the stuff, in the days before our tastes in the UK became more sophisticated.

Nowadays, clever containers, providing the exact climate for the cargo contained therein, keep all this edible cargo safe and well on its ocean passage. Short of plugging the box in to the ship’s supply, there is not a lot for anyone to do. But that’s progress.