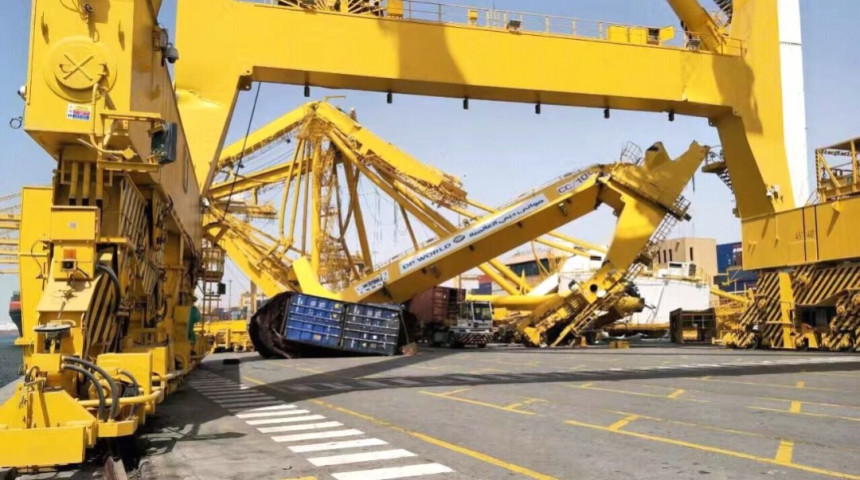 I have a dim and distant memory of a black and white war film that we probably watched on deck in the tropics to great enthusiasm. “Damn the torpedoes – full ahead and give her all you’ve got Mister!” said the heroic captain of this cheesy epic, which is the only thing that has been retained in my memory.

The film came to mind as I was watching the latest YouTube depiction of a crane strike in port, with a clearly out of control container ship bow clouting a huge ship loader in an Indonesian port, to the accompaniment of startled shouts from the onlookers and a vast explosion of dust and tangled metal. There is nothing, it seems that is so easily demolished as a container crane, the lightest touch from a bow or stern flare collapsing it in seconds, leaving remains that resemble a vast dead stick insect, with tangled metal heaped in every direction.

It is happening quite regularly; so much so that the excellent TT Club, which gets involved in all these claims, has issued a helpful encyclical full of advice that might reduce the number of casualties in this category.

It has to be said that it is not just container ships which are the guilty parties – bulkers also get out of control and do cruel damage to shiploaders and wharves, and rather more rarely, a tanker terminal comes off worse in an argument with a heavy landing tanker.

Out of control ships of any type can do a lot of damage to others innocently lying alongside. And we mustn’t forget the recent spectacular cruise ship accidents in Venice, which attracted the attention of the world’s media. Is this a trend and is there any explanation for these bumps, scrapes and demolition jobs, in port waters?

The TT Club advice covers all the obvious causes of these incidents and suggests how they might be mitigated. The master/pilot relationship, engine problems, mooring mishaps and tug troubles, crew competence aboard and ashore, weather wobbles and weak lines are all matters that need to be considered if a ship is hoping for a safe landing. But there are quite a lot of matters that are (for reasons of diplomacy) left unsaid.

Start with the engines, which are at their most temperamental when the ship is manoeuvring, more so in an era of fuel switchovers, something that does not really encourage confidence in an era of fanatical emission-reduction. With people being heavily fined for a little smoke emission, you can imagine this will weigh more heavily on the minds of engineers than making sure the engine does what the controls are demanding.

You might ask why it is that so many of these accidents seem to involve containerships. Might it be the same reason that when there is some instance on passage of what might be thought of as “sea-road hoggery”, the chances are that it will be a container ship that is at the bottom of it. Speeding in fog, menacing whales and other ships, refusing to give way or overtaking too close – the charge sheet is a long one.

Probably the liners have always been guilty of this sort of behaviour, and merely continued with it when the container age ushered in new levels of precision and time keeping, but these tend to be vessels that, to put it bluntly, cannot stand a delay.

They are in a hurry to get alongside, and won’t wait. These are people under intense pressure from their superiors who look upon ships as just an advanced form of lorry, which ought to be parked with the ease of a medium-sized saloon car. Why are these people complaining? Don’t they have bow thrusters?

Pilots in some ports are also in a tearing hurry to get the ship alongside and on to the next job. It was revealed after a big container ship had done all sorts of damage in a middle-eastern container port, there was a strictly observed schedule for piloting and berthing/unberthing in the port.

Those who did it faster were the heroes, those who took a bit longer were expected to be carpeted and explain why. Worse still, at that port, because some pilot managed to shave five minutes off the time from joining the ship to being berthed alongside, a dictat came around saying that all the pilots were now expected to record similar times. I bet nobody stood him a drink in the pilot’s rest rooms.

It is also impossible to ignore, in this catalogue of crushed and twisted metal, the haste with which owners have embraced bigger ships. To the owner, it has been a relatively simple matter to embrace scale economies, citing everything from environmental benefits to cheaper rates for the customers.

It is the ports that note with dismay that the ships the owners have bought are now longer than the turning basins, deeper than the dredged channels and so wide that their existing cranes won’t reach the offshore tiers of boxes.

They also will almost certainly have to invest in more powerful ship-handling tugs and even reinforce the quays, lest an offshore breeze tears all the bollards out by the roots. And while a ship owner can order a big new ship in a matter of months from the desperate shipbuilders, a port will have to endure years of unarmed combat with environmentalists and other objectors just to widen a channel or dig out the turning basin. It is a matter of getting quarts into pint pots. Maybe we just have to remember that you cannot make an omelette without breaking eggs.