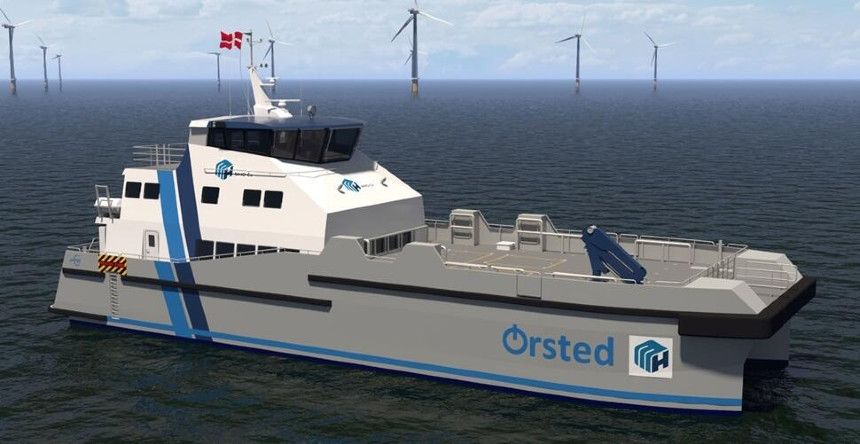 The 35-metre vessels were designed by MHO&Co in cooperation with Incat Crowther in the UK and Australia and built by Afai Southern Shipyard in China. Both vessels will be capable of carrying 24 crew and will be fitted with a large lounge area and eight cabins.

The crewboats will serve Ørsted’s Hornsea Two offshore wind farm, which will be situated 89 to 120 kilometres off the Yorkshire coast in the North Sea and is expected to enter operation in 2021.

The use of variable speed gensets combined with the selectable multi-genset option has major environmental advantages and will ensure high availability resulting in extremely low downtime. Additionally, the smaller D8 units allow for future technologies by replacing one (or more) D8 with fuel cells or similar when technology allows.

A battery pack will also be installed to support peak-shaving and to allow the vessels to operate in fully-electric mode at low speed and during long stationary periods.

Both crewboats will be capable of operating in either fully-electric or hybrid mode. When cruising to windfarms all four Volvo Penta IPS can be powered, two mechanically and two electrically.

In harbour or at the wind farm there is the option to run the vessels with either battery to the electrical Volvo Penta IPS legs or any combination of one to five gensets, depending on weather conditions. It is estimated that this choice of operation is set to save about 127 tonnes of CO2 compared to traditional diesel-powered vessels.

From the bridge, these vessels act as a Volvo Penta IPS QUAD with hybrid options, assisted by a Danfoss Editron Control System (ECS). The vessels are commanded by Volvo Penta controls and the electronic vessel control (EVC) system, which communicates to the D8 gensets as well as the Danfoss Editron ECS.

The ECS calls off genset power and/or battery power automatically, or when ordered from the captain’s HMI-display.