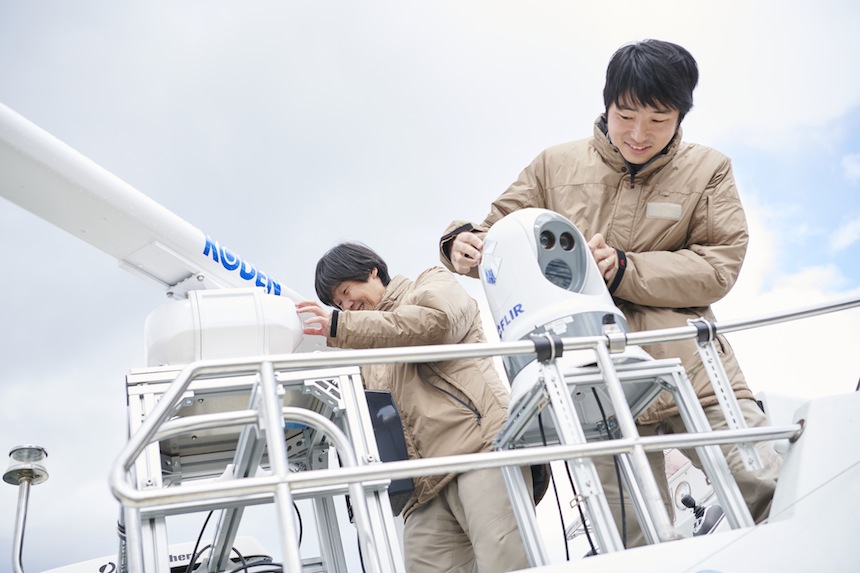 As autonomous vehicles become a more and more common feature on the roads, maritime robotics technologies are also progressing rapidly. Beginning in 2017 with the “Robotic Boat”, an unmanned deep-sea exploration vehicle, Yanmar has been working on the deployment of auto-navigation and automatic docking systems. Yanmar’s maritime robotics technology is a response to labour shortages in the fisheries industry, especially in Japan.

Yanmar considers docking to be the most challenging skill in maritime robotics technology, and has been working on its implementation since 2017, with an initial prototype of the vessel completed in 2018.

“The most important factor with auto-docking is improving its level of precision in positioning the boat itself,” explained Yuichiro Dake, in charge of development. “However, the GNSS system we used for marine navigation was only accurate up to several metres. With the preliminary system, “real time kinematic” (RKT) was set up port side to send correction signals for accurate positioning. We were able to limit precision errors to within several tens of centimeters.”

Application of technology used for Yanmar’s robot tractors proved invaluable in greatly improving the precision of the system.

There were other issues in the ship’s control. A major difference between a tractor and a boat is its condition when it is not in motion. A tractor will not move from its position once parked. However, a boat will be likely to drift off to its side even when anchored. The challenge in controlling the ship was in how to dynamically correct its position.

For autonomous operation, Yanmar used a twin-propeller, twin-rudder ship. This configuration allowed control of each propeller, for greater maneuverability compared to a single-propeller, single-rudder ship. The addition of a thruster to enable sideways movement meant that the ship could move in all directions. Yanmar proceeded with the project by concentrating on this type of boat first and succeeded in developing a product within a short time frame.

The auto-docking technology was presented at the Japan International Boat Show in March 2019, however, despite a strong response from the industry, there were challenges which needed to be overcome before this technology could become commercially viable, including the speed of the auto-docking process.

“The preliminary model for auto-docking was too slow,” explained Naohito Hara, who has long-time experience overseeing the development of navigation systems and control. “A maximum speed in the range of 0.5 to 1.0m/s, meant that while it was safe, the ship ran the risk of becoming an obstacle to other vessels in the harbour. We decided to apply an autopilot system that was widely used in the marine industry for automatic steering control so that the two control systems could be used together until docking.”

Through this technology, the time from entering the port to docking was slashed from four minutes to two and a half minutes. 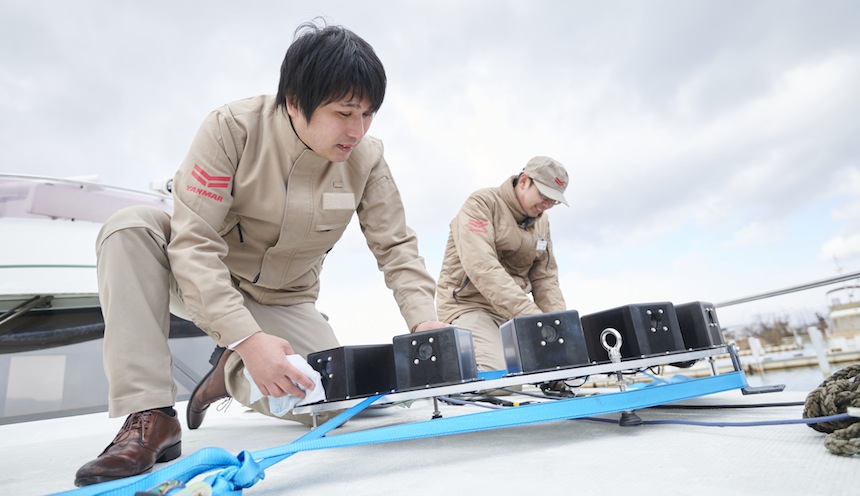 The development team has also been working on improving the safety and flexibility of the auto-docking system. Auto-docking using RTK, as seen in the preliminary model, did not allow docking unless there was equipment set up inside the port. There was also the danger of the vessel making movement decisions based only on the sensors it used to determine its own position.

To solve this, 3D-LIDAR was installed to allow the vessel to detect its environment. In cooperation with the GNSS, the vessel could build a picture of its location in the environment and a system was created to allow the vessel to correct its own position accordingly. Because of its ability to navigate while sensing obstacles, safe sailing was possible along with auto-docking at a desired location, free from the constraints of RTK. For auto-navigation offshore, a safe and accurate navigation map could be built up through the combination of 3D-LIDAR and marine radar. The vessel could now easily determine the location of buoys, which had previously been considered a difficult problem.

Another area of great improvement was creating the navigation route.

“When we considered safety, we needed a system with even lower risk of collision. We started looking for ideas from outside the field of marine vessels, such as robots used indoors. We adapted this to meet requirements for auto-navigation and auto-docking systems,” said Tomoya Fukukawa, in charge of development for this system.

There are still areas of improvement to be considered and further development continues to tackle navigation speed and safety during bad weather. The ultimate goal is a completely unmanned vessel with technology that transcends human capabilities and is able to operate as an alternative to difficult and dangerous offshore maritime work.