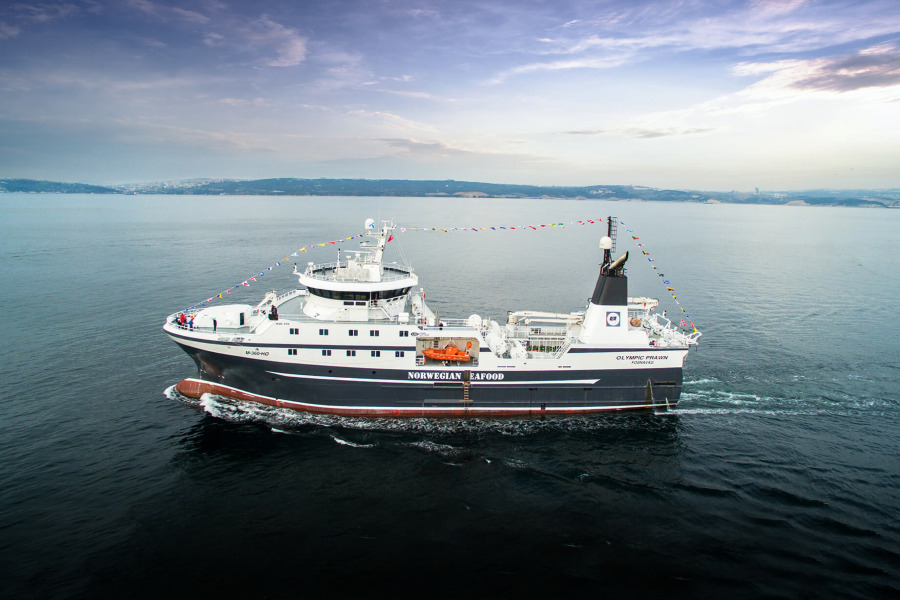 Classed by DNV and built by Cemre Shipyard in Turkey to a Kongsberg Maritime ice-capable design, Olympic Prawn was developed in response to Olympic Seafood’s need for a new vessel that is capable of sustainable ocean harvesting through low energy consumption and reduced emissions. As such, the vessel boasts a hull design that guarantees both low wave resistance and excellent seakeeping as well as deck and processing machinery largely driven by electric motors.

Olympic Prawn was designed to perform bottom trawling as well as pelagic trawling. It also features a modern factory deck arrangement to handle and freeze krill, shrimp, and whitefish, ensuring the quality of catch during long periods of sailing prior to returning to port.

The vessel has an LOA of 69.91 metres, a moulded beam of 16 metres, a draught of 6.7 metres, and accommodations for up to 29 people including crew and fish factory personnel.

Power is provided by one Rolls-Royce Bergen B33:45 L9 main diesel engine producing 5,400 kW at 750 rpm. A selective catalytic reduction (SCR) system has also been fitted to ensure compliance with IMO Tier III regulations. An integrated rudder and propeller system supplied by Promas has both mechanical and diesel-electric drives while a Kongsberg PTO/PTI hybrid shaft generator (HSG) enables both the engine and the propeller to operate at optimum efficiency.

The main engine drives a Kongsberg 3,900mm propeller to allow the vessel to sail at speeds of up to 16 knots. A Kongsberg 590kW controllable-pitch bow thruster has also been installed to aid in manoeuvring and positioning. The thruster is driven by the HSG as well.

Olympic Prawn has two auxiliary engines to provide an added measure of comfort for the crew during operations far from home. These include a 1,900kW Cummins engine and a 596kW unit from Scania.

The trawler’s massive size enables it to house a wide range of equipment suitable for low-emission krill harvesting operations in Antarctic waters and other regions.

For hauling catch onto its spacious deck, the vessel has been fitted with Motus equipment including a starboard midship crane with 16-metre reach, a loading/unloading crane with 10-tonne maximum lifting capacity on the trawl gallow, a three-tonne crane on the forecastle, and two ice trawl davits with safe working loads (SWL) of 60 tonnes each.

Optimar provided nearly all of the processing and freezing equipment in use aboard Olympic Prawn. These include a freezer hold that can accommodate up to 1,400 cubic metres of krill, a packing machine and table, a pallet magazine, numerous chutes, conveyors, and bins, a plastic wrapping machine, and a blast freezer. There are also krill de-heading machines from Baader and Breivik and grader air cabinets from Marel. Baader also supplied a knife sharpening machine along with the other factory equipment.

To ensure the catch remains frozen while in transit, an Oyangen pump circulates ammonia cooled to -30 degrees Celsius throughout the freezer hold, giving the vessel a freezing capacity of up to 100 tonnes a day.

Olympic Prawn was also built to enable its crew to be prepared for emergencies, especially in consideration of the vessel’s area of operations thousands of kilometres from the nearest suitable port. The trawler is thus also equipped with a CO2 suppression firefighting system and two SOLAS-compliant Viking Norsafe 6.25-metre self-righting lifeboats powered by outboard engines and capable of accommodating up to 15 people each.

Lastly, to ensure crew comfort during long periods out at sea, the vessel has been fitted with crew berths including separate one-person cabins for the captain and the chief engineer, a mess with kitchen, a coffee bar, and a gym.

KiwiRail spends more than NZ$335,000 in enforceable undertaking after incident on ferry