In 2017, when Scottish fisherman Peter Lovie expressed an interest to add a new twin-rig trawler to his fleet, he once again turned to local builder Macduff Shipyards. The same company had already supplied him with four earlier newbuildings, but many years later, the owner said he felt he needed improvements in fuel efficiency, service speed, and seakeeping beyond what his existing vessels can provide. This then led to design studies by the team of Macduff Shipyards and Macduff Ship Design, which determined that a longer vessel, free from the constraints of registered length, was the ideal solution.

The trawler’s construction also involved Szczecin, Poland-based shipyard Finomar, which was sub-contracted by Macduff Shipyards to fabricate the hull and wheelhouse. These were then towed to Macduff in November 2019 for full outfitting to MCA and Bureau Veritas regulations. The vessel, later named Endeavour V, was completed the following year, and its initial operational voyages shortly after delivery to Peter’s company Knockhead showed that the longer hull form was indeed capable of ensuring the attributes the owner wanted: namely, increased speed, reduced fuel consumption, and improved seakeeping. 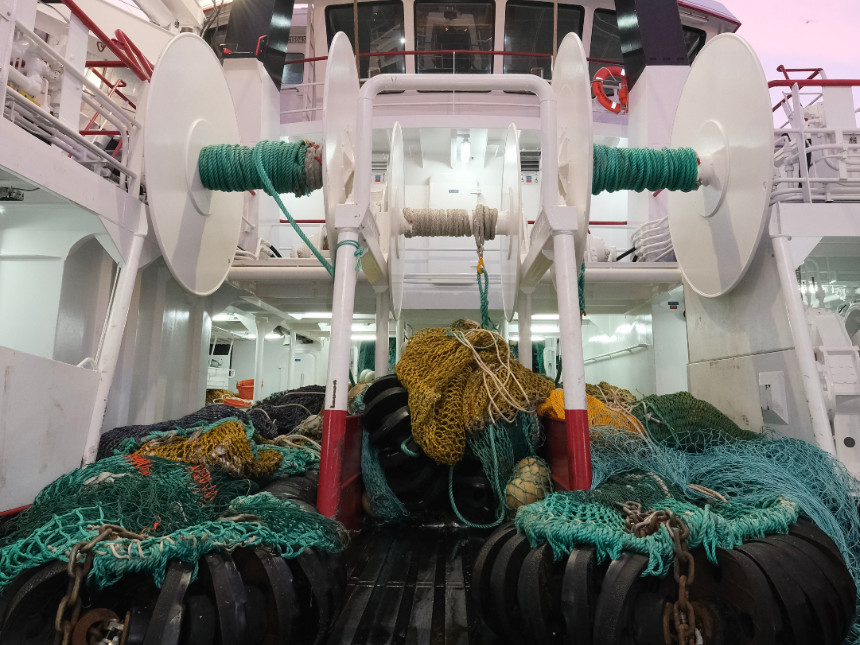 Endeavour V has an LOA of 34 metres, a beam of 10.5 metres, a depth of 4.9 metres from the main deck, and a displacement of 905 tonnes. The vessel, the largest in the Knockhead fleet, is operated by a crew of 12 and is being used to catch whitefish and other species in North Atlantic waters west of Scotland.

The hull form is of round bilge with a streamlined bulbous bow. The vessel also possesses two complete decks, as well as partial shelter and bridge decks. A ballast box keel is fitted along with deep “V” bilge keels and a roll reduction tank is installed to dampen roll motion.

Endeavour V features four deck levels that all run the full length of the ship. The arrangement is based closely on that of Peter’s earlier vessel, Endeavour IV, but makes use of the additional space to increase crew comfort, fish hold capacity, and working deck areas.

Below main deck is separated into four compartments: aft peak, engine room, fish hold, and forepeak. The aft peak features numerous tanks used to house both freshwater and ship’s services such as lubrication and hydraulic oil.

Forward of this, the engine room houses the main propulsion machinery including a Caterpillar-MaK 8M20C main engine that produces 1,060 kW at 900 rpm. The engine is coupled to a free-standing Mekanord 650HS reversing gearbox with a reduction ratio of 6.47:1, and this in turn drives a Kumera Helseth large 3.3m diameter controllable-pitch propeller to propel the vessel to a speed of 13 knots at 100 per cent MCR. A low-drag, high-thrust nozzle is fitted in way of the propeller and incorporates a triple rudder system to provide high turning force. Both the nozzle and the rudder were supplied by BT Marine Propellers.

Installed in the port side of the engine room are two Caterpillar C9.3 generator sets, each delivering 250 ekW of power along with the hydraulic standby pumps and fuel filters. To the starboard side of the engine room, the large main switchboard is fitted within a dedicated enclosure along with a small workstation to provide a place for the ship’s engineer to monitor and record system performance. Forward of the switchboard room, the fish hold refrigeration is fitted along with the standby engine cooling pumps.

The main engine and generators are cooled via freshwater box coolers from Blokland. A hydraulically-powered stern thruster is fitted aft above the propeller shaft. The stern thruster’s motor is also installed in the engine room. Both the stern and the bow thruster were supplied by Kort Propulsion.

A large fish room installed forward of the engine room has capacity for up to 2,200 stacking fish boxes. Refrigeration was achieved with chilling pipes fitted to the ceiling of the hold as well as below the floor where they were incorporated into the subflooring. The fish hold refrigerant is liquid-based, which poses no danger to life if a leak occurs and can be easily mended onboard.

Ice lockers are arranged in the hold and can house up to 10 tonnes of flake ice. In addition, a slurry ice mixing tank is fitted to provide premium chilling for certain species.

At the stem of the vessel, the forepeak is divided into four compartments with three large freshwater tanks that are used for ice-making along with a bow thruster access compartment on the centreline.

Above the main deck, the vessel is generally divided along the centreline with working areas to port and accommodation to starboard. To the port side, there is a steering gear compartment combined with engineer’s workshop aft, fish handling area amidships, and dry locker forward. To the starboard side, there is a laundry/pantry/galley aft, followed by a large mess/lounge amidships and four two-person cabins forward. A large 20-cubic-metre hopper is fitted on the centreline.

The trawl deck features twin ramps aft with hydraulic stern gates fitted to the top of each ramp for crew protection. Forward of these are two flush-mounted hopper hatches where the catch is taken on board. The deck is then open all the way to the stem where three sweep winches are fitted to allow maximum deck length for storing and mending nets.

Much of the deck equipment including machinery, the hydraulic system, and the automatic control for the electric/hydraulic pumps are part of an extensive package from MacGregor while Scanmar provided an array of trawl sensors to aid the crew in monitoring trawling efficiency. Jackson Trawls supplied the vessel’s trawls, sweeplines, and other fishing gear. 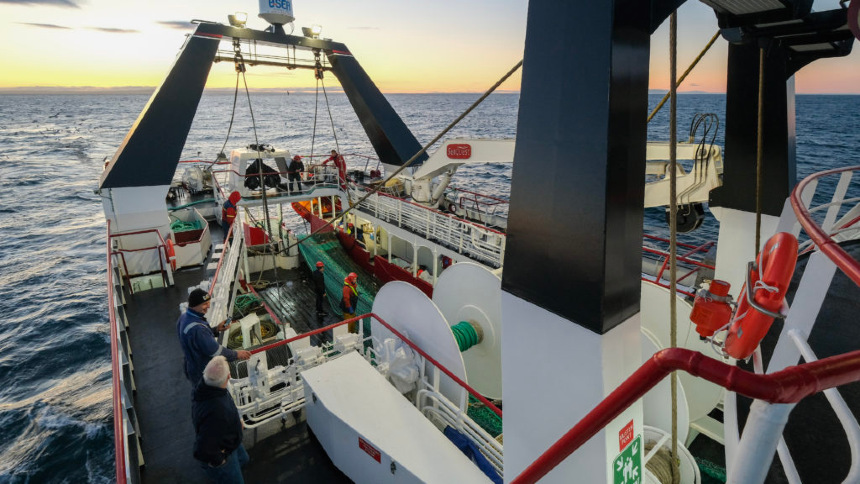 Fitted amidships immediately above the net tracks are three separate bagging winches. Three split winches are fitted amidships – two to starboard and the third to port – and lead directly aft to large trawl blocks capable of sliding forward up to 1.2 metres from the transom to reduce the pressure on the steering gear when towing an edge in deep water. Numerous casings are fitted on either side of the tracks and serve various functions such as a gear store, air handling unit room, two-person cabin, and unloading trunk.

The shelter deck runs from stern to stem. Aft it is mainly open and provides a walkway around the perimeter of the vessel as well as shelter for those working on the trawl deck. Amidships features a full-beam casing where three two-person cabins are fitted along with an electronics room. Forward is arranged for mooring and anchoring and features a three-barrel winch fitted within a weathertight compartment. This is used to stow the two anchor warps along with a spare barrel for mooring ropes.

At bridge deck level is a large wheelhouse that covers nearly the full beam of the hull to provide excellent visibility when manoeuvring in restricted areas. Large windows are also fitted aft on the centreline and provide an unobstructed view of the trawl deck to enhance crew safety. At the head of the U-shaped control console is a skipper’s chair from E Vejvad Hansen. Woodsons provided a comprehensive electronics package that also includes an integrated touchscreen control system. The console also has widescreens and monitors from Neovo.

The rest of the vessel’s array of electronics include Kaijo split-beam echosounders, Sodena Easywin plotters, a Sailor GPS, a JRC satellite compass, a Simrad gyro compass, JRC radar and AIS, a Simrad autopilot, and a complete GMDSS suite with Sailor VHF radios and radiotelephones, a JRC navtex, and a Jotron EPIRB.

To help improve crew comfort, the wheelhouse also has a built-in refrigerator and facilities for preparing hot drinks.

Endeavour V also has a host of safety features suitable for the eight- to nine-day fishing trips intended by its owner. These include a Noris Automation vessel monitoring and control system, a compact gangway supplied by MMG Welding, and an MOB recovery sling from QuikSling. 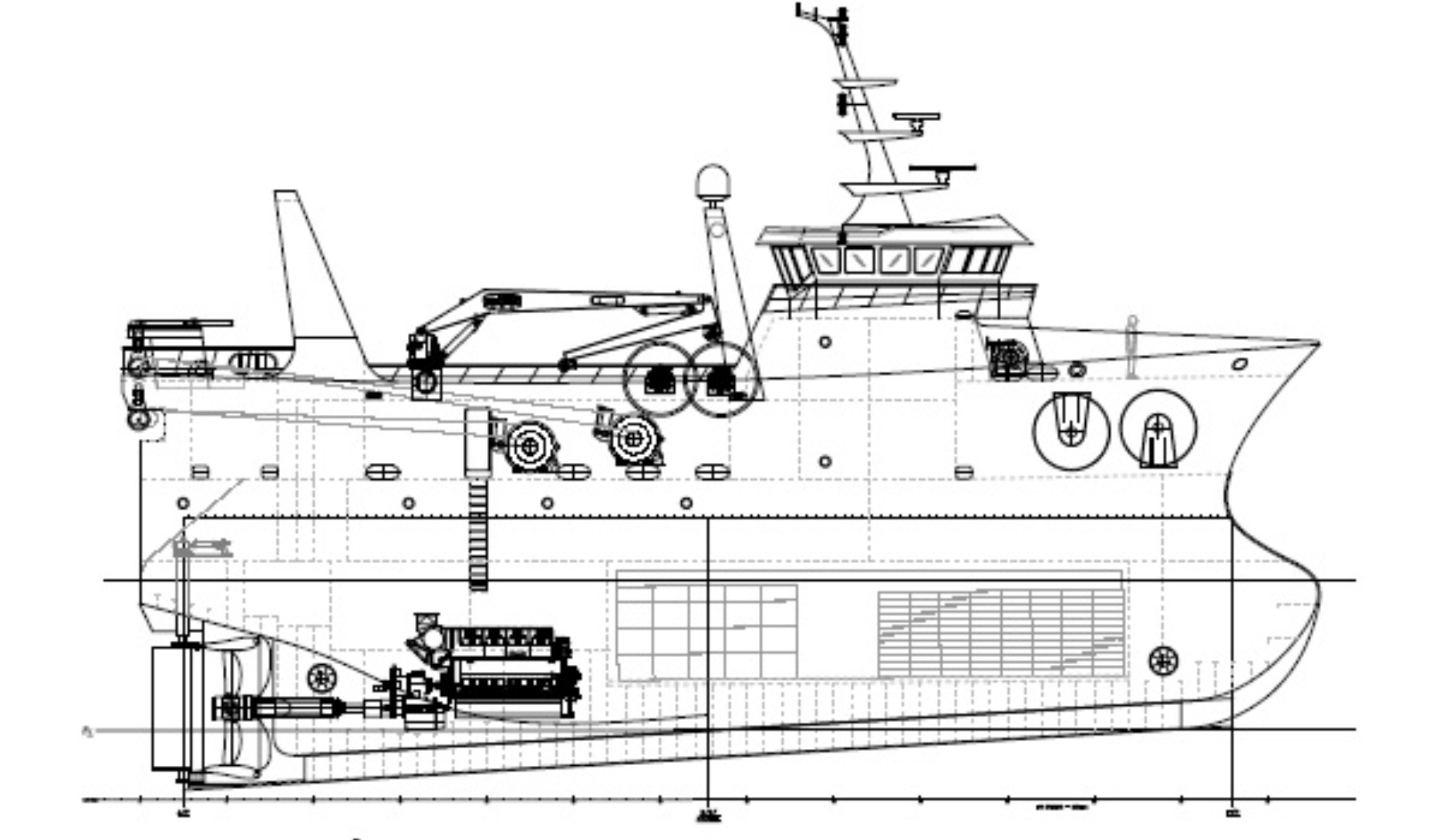