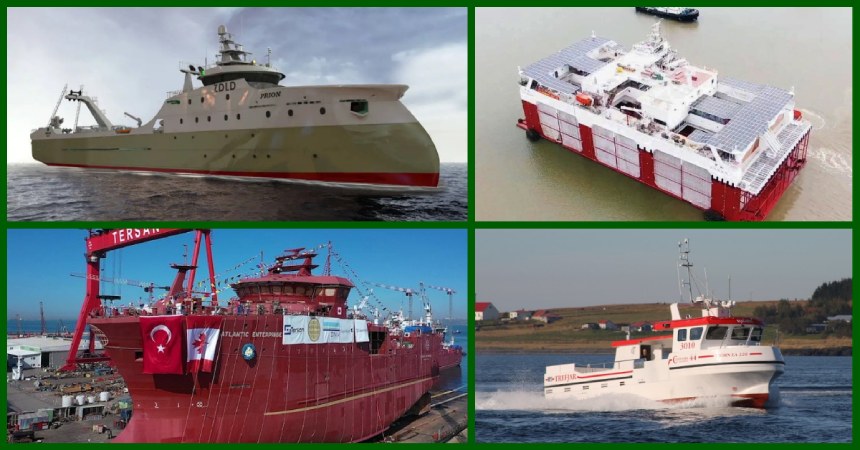 A Chinese aquaculture company will soon take delivery of a new deep-sea harvesting and tourism facility, a pelagic trawler has entered service in Scotland, and a new netting boat has been handed over to its owners in northern Iceland. Work is progressing on a new shrimp and halibut trawler for a Danish seafood company. Lastly, a customer in Spain selects a local shipyard for a new trawler optimised for South Atlantic waters.

A new semi-submersible offshore fish farm that will also serve as an aquaculture tourism platform will soon begin operations in the waters of China’s Fujian province.

The onboard systems draw electrical power from wave energy and photovoltaic systems to ensure reduced emissions.

Icelandic boatbuilder Trefjar recently handed over a new netting boat to Heimsskautssport, a fishing company based on the island of Grimsey near the Arctic Circle.

The newbuild replaces an older Trefjar boat that was delivered in 2005.

Northbay Fishing Company and Wiseman Fishing Company recently took delivery of a pelagic trawler built by Karstensens Skibsværft of Denmark to a design by Skipsteknisk of Norway.

The 75-metre-long Artemis will replace a similarly named vessel in the owners’ fleet.

Once completed, the Skipsteknisk-designed Atlantic Enterprise will measure 83.2 by 18 metres and will be equipped primarily for catching and processing shrimp and Greenland halibut. The freezer hold will have a total capacity of 3,000 cubic metres and will include space for pallets.

Atlantic Enterprise will the third Skipsteknisk-designed vessel to join the Ocean Prawns fleet. It will sail under the Canadian flag.

Petrel Fishing Company, a member company of Spain’s the Pescapuerta Group, has selected local shipbuilder Nodosa for the construction of a new freezer trawler.

The 2,500GT, 85-metre Prion will be operated primarily in the South Atlantic following delivery at the end of 2024.

The vessel will have three deck cranes and crew accommodations consisting of both single- and double-berth cabins. The onboard factory deck will have an ergonomic layout to ensure greater efficiency.