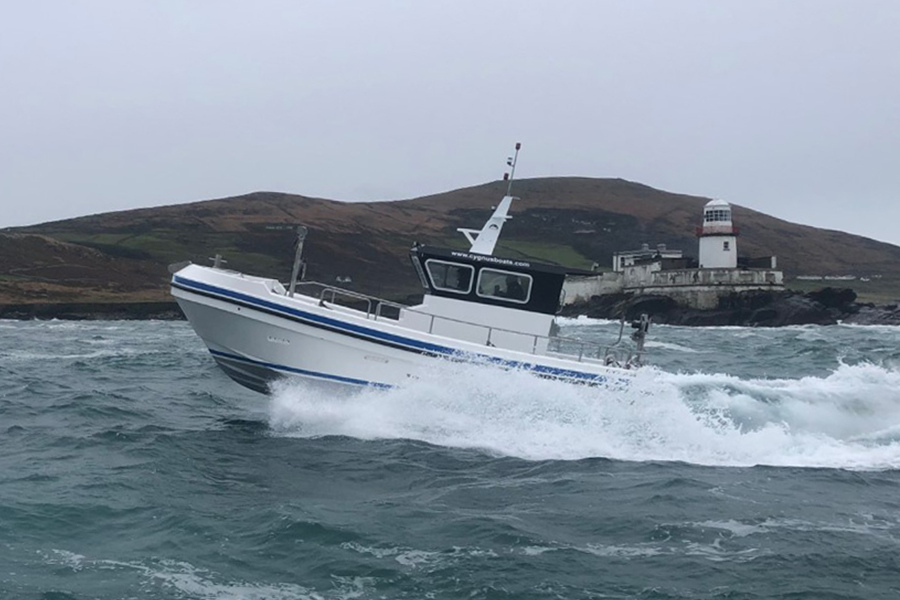 The design, which complies with SFIA and MCA rules, was intended to be capable of fishing even under extreme conditions in the Atlantic. Features that contribute to this suitability for such waters include a comfortable cabin, a large walk-around working deck, and a hull lift strake that extends from the bow to aft to enable the boat to sail at high speeds while still retaining excellent seakeeping ability. The lift strake also incorporates over-developed chines to provide a steadier working platform when hauling gear in swells.

As with Murphy Marine’s other newbuilding projects, the boat for Mr Percelay was designed and built in conjunction with the owner as a bespoke vessel. Most prominent among the custom features is the pilothouse, which is located aft instead of being placed well forward as is the case on the original nine-metre Cygnus design. The builder said this configuration will allow quicker access to the hand tiller control.

Kornog is also fitted with a Furuno radar, an aft gunwale-mounted longline hauler, and a raised hatch just forward of the pilothouse to provide access to an insulated fish hold. She has trim tabs integrated under the hull for situations that require more precise manoeuvring, such as when positioning the boat over an ideal fishing spot.

A single Cummins QSC8.3 six-cylinder, four-stroke diesel engine delivers 372 kW at 1,800 rpm to a 609- by 647mm propeller mounted on a 50mm duplex shaft via a Twin Disc MG 5065A gearbox with a 1.5:1 reduction. The IMO Tier II-compliant engine propels the boat to a maximum speed of 26 knots and a comfortable cruising speed of 18 knots.

An electronic monitoring system enables the operator to keep a close watch on parameters such as fuel consumption, duty cycle, and engine load while providing diagnostics and prognostics.

A power take-off from the main engine provides the hydraulic power for the longline hauler as well as a pot hauler on deck.

Kornog has already begun operating in the English Channel out of the commune of Audierne on the westernmost tip of Brittany, where its owner is based. The newbuild will replace an existing boat originally completed in 1987 and acquired by Mr Percelay in 2013 to launch his own fishing business. Like its predecessor, Kornog will be used to fish for bass, pollock, sea bream, and scallops.