Robert Allan Ltd. – The place that launched a thousand tugs

Written by Baird Maritime on August 9, 2017. Posted in Tug and Salvage World.

Over the last few years, as the design output from Robert Allan Ltd. to the global tug community began to border on the prodigious, we were often asked, “How many tugs has your company designed?” Until very recently we really did not have a good handle on that number, so the answer was usually either “a lot” or “many hundreds”, neither of which were particularly illuminating! So a search was begun late in 2016 to review our archives and try to determine the tug tally much more precisely.

Where did it all begin?

It is unfortunately difficult to identify the very “first” tug designed by this firm as the records from the 1930s consist primarily of the rather incomplete set of original drawings which are still in our possession. There is no formal internal listing of the design work done in those days which might provide a more complete record, however there are the amazing resources of the archived Harbour and Shipping magazines at both UBC and at the Vancouver Maritime Museum.

Our resident marine historian Rollie Webb was able to sleuth through those records and identify a 1934-built tug designed by Robert Allan, the Weaver Lake, built for a Captain E.C. Merchant. In our archives there is an undated, handsome little ink on linen drawing for a “shallow draught towboat” whose dimensions at 12.7 by 3.4 metres match the Weaver Lake. A query to the Vancouver Maritime Museum turned up a photo of the Weaver Lake in the collection of Fred Rogers, which certainly reflects the drawing. So we can, with considerable confidence, declare her as our “Eve”! (Adam having been unceremoniously relegated to second place due to gender bias!)

Interestingly many of those early tugs, including the Weaver Lake, were shallow draught designs, most likely built for work on the Fraser River and its tributaries in its “pre-dredged” era. There are also some quite small workboats (some as small as 5.5 metres long) which were described as “towboats” which we did not count. Similarly, the many small boom boats designed by the firm are not included as real “tugs” for purposes of this tally. The resulting count for tugs and towboats built in the 1930s is a grand total of three.

The 1940s were a time of the construction of many fishboats and of course the distraction of the war effort where both Robert Allans were engaged in design efforts with local shipyards. There are only four tugs in our files from that decade. However, this period contained what is certainly the most elaborate set of design drawings of the era for a 23-metre shallow-draught steel towboat (with a lower deckhouse of steel and the upper two tiers of timber/plywood).

The plans are unfortunately undated but the business address shown on the drawings is for my grandfather’s house on West 63rd Avenue near Laburnum, where the company really had its beginnings. He bought that house in 1945, (for $4,500!) so it is assumed the design was done sometime after 1945. This design is done in extensive detail, probably as a working drawing contract, and best indications are that she was the Sandy Jane built by Yarrows in 1946 for Yellowknife Transportation for service on the Mackenzie River.

The 1950s began with what we can firmly identify as our first steel coastal tug design. The Black Bear was designed in April 1950 and delivered in October 1950 by Victoria Machinery Depot for Black Ball Towing Co. Her registered dimensions were 13.0 by 1.9 metres, and 32GR. Original machinery was a Gray Marine diesel of 250kW. An interesting and highly innovative feature at the time was a hydraulically elevating wheelhouse, indicating that the tug was destined to work primarily on the river and needed to duck some bridges!

Black Ball Towing was absorbed by Gulf of Georgia Towing (named as owner on the drawings!). When Gulf of Georgia Towing was bought by Seaspan the tug was renamed Seaspan Rebel then sold and renamed Nanaimo Rebel and finally Black Bear II. At some point, it was extensively rebuilt. In 2003 it was owned by a numbered company in Kitimat. The registry on Black Bear II closed in 2011; vessel fate unknown.

The 1950s may have marked the real beginning of steel tug construction in BC, but there were still a fair number of wooden tugs being designed and built. Notable among the latter was the Tugger Yorke for FM Yorke and Sons. Built in 1955, according to Nauticapedia she was still in service on the BC coast in 2013 having endured many changes in both guise and ownership over the years.

A milestone vessel designed in the last year of the 1950s was the Ocean Master, an early large tug design and almost certainly the first internationally-built tug from this office. This 38-metre tug was built by Van Der Werf Scheepswerf in Holland in 1961 for Great West Towing and Salvage, and appears to still be in active service in Canadian registry.

The last couple of years of the 50s marked the beginning of a transformation of the BC towing industry, with a federal shipbuilding subsidy providing significant financial incentive to owners to replace their aging wooden fleets with new steel tonnage. The Lorne Yorke, designed in 1959, was billed as, “The first modern twin-screw tug in BC.” at her launching. It is difficult to know how “modern” was judged and by whom, but she was a fine tug and praised by her crews for her seakeeping ability. Robert Allan Ltd. designed about 14 tugs in the 1950s.

The boom in new steel tugs (and many new steel barges to be towed by them) continued in earnest throughout the 1960s, and Robert Allan Ltd. was certainly at the forefront of these developments. In 1963 the company graduated from my grandfather’s basement and under my father’s direction settled into “real” offices at West 72nd Avenue and Granville Street.

1969 was a year of very significant output from what was then a company of about eight to 10 people. It also marked the first exchanges between Robert Allan Ltd. and the firm of CH Cates & Sons… a relationship which would have lasting and dramatic impact on the future of our design firm.

This period also saw the boom in the new era of “under tonnage tugs”. It is difficult to identify exactly how many of these sub-15GRT, “41 footers” (12.5 metres) were built by the likes of John Manly and Vito Steel Boat and Barge, but we can identify at least 14 from Vito and perhaps 10 from Manly’s. A grand total of 106 tugs were built to our designs in that decade!

As the 1970s dawned the focus on our business shifted north, although there were still many tugs built locally in that decade. I joined my father in the business at the beginning of 1973 when our staff totalled about 12 persons. Tugs for the Mackenzie River System and ice-class vessels for the Beaufort Sea consumed much of our talents in those years, but there were some coastal highlights too, notably the 34.7-metre, 1,900kW Jervis Crown, a very favourite of my own early career (1976) as my father (though watching carefully!) let me have a relatively free rein with this design.

This decade also spawned the series of 23-metre, sub-150GT tugs which are all still in service today. Vito built four tugs for Gulf of Georgia Towing, the Cindy Mozel for Captain John Mozel, and the slightly smaller Comox Crown for Crown Zellerbach.

The early 1980s were dominated by projects for the Beaufort Sea and in particular with the design of Ikaluk and Miscaroo for Gulf Canada Resources. These 79-metre, 11,100kW icebreaking supply vessels were the only high ice-class OSVs of their kind anywhere in the world at the time, and are still operating effectively in Sakhalin today. It was a very large and significant project for our office, and introduced me to the marked contrasts in efficiency and quality between domestic and Japanese yards. The most difficult part of the project however was watching my father slowly succumb to cancer throughout the duration of the project, which he was unable to see fulfilled.

Those heady days of 1981-82 however soon led into the doldrums of the balance of the 1980s, a period of very little activity in the maritime world, and we simply hung on by our fingernails for much of that period. There were however, some notable bright spots in the 80s, not least of which was the development of the first Z-drive tugs for CH Cates and Sons. The Cates 2 was built in 83, followed by the Cates 1 in 86 and the Cates 3 in 90.

As the 1990s dawned, the era of the Z-drive tug really began in earnest, at least in North America…it had begun 20 years earlier in Europe. The small but mighty Cates tugs attracted a lot of attention and shortly thereafter enquiries for similar tugs came in from many places in North America and from Europe. The lessons learned from working closely with Terry Waghorn and later with Claire Johnston of Cates stood us well in this emerging technology.

We had learned what works best in terms of hull form for these agile tugs and applied those lessons to ever-larger ASD type tugs. In 1993 a series of 3,000kW, 30-metre ASD tugs were built by East Isle Shipyards (as part of Irving Shipyards) of PEI. These were highly successful boats, some of which were bought by operators in Europe. That connection to major European owners, and in particular to Østensjø Rederi of Norway opened many doors for Robert Allan Ltd. and led to the opportunity to design several major and innovative tugs for the emerging tanker escort tug market. The business for new tugs was on a tear and we were fortunately well placed with fresh ideas to serve the burgeoning market.

In about 1995 I had a phone call from a university student in Turkey. Ali Gurun wanted to talk about escort tugs. Several months later, he called again and advised me that his family owned a small towing company and wanted to build some new tugs. An amazing and enduring relationship was born between our companies and to date Sanmar has built more than 150 tugs to our designs, in the process establishing themselves as probably the premiere tug-building shipyard in the world. That connection quickly led to relationships with other shipyards in Turkey, notably Uzmar and Med Marine, and soon we were seeing more than 40 to 50 tugs per year being built in Turkey alone.

The development of ever-larger container ships, major LNG terminals, expanding bulk carrier ports such as Port Hedland in Australia, and of course, the rapid evolution of tanker escort technology created a whole new generation of high-performance specialised tugs. Since 2000, Robert Allan Ltd. has had more than 720 tugs built to our designs worldwide. 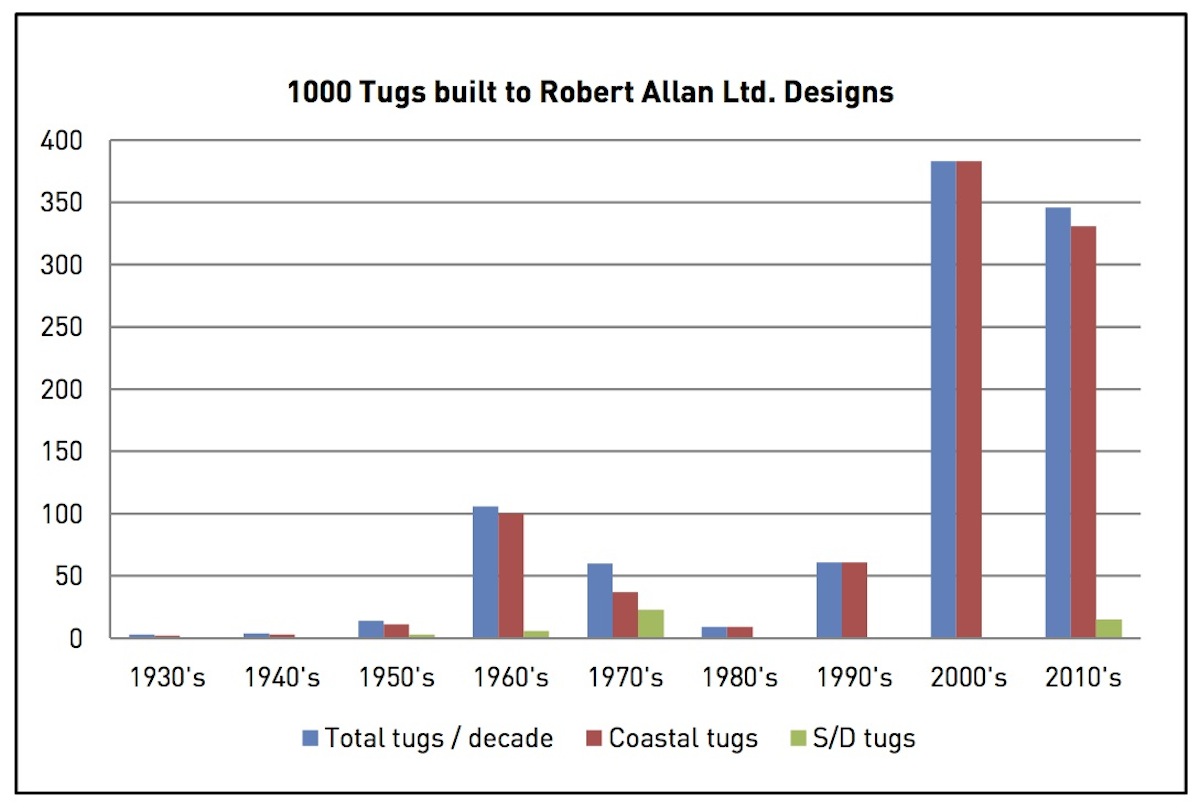 When added to the historical database the total number of tugs delivered stands, at time of writing, at 1005! The figure above illustrates this amazing growth quite dramatically, as well as reflecting the past glory of the 1960s! It is important to note that the last column only includes the first 6.3 years of the decade, so we can safely anticipate that the next three years will show a significant increase over the first decade of the millennium.

That honour, most fittingly, goes to the Dux, the first of three ultra-high performance dual fuel escort tugs built by Gondan Shipyard in Spain for Østensjø Rederi of Norway. Johannes Østensjø was the first owner in Europe to purchase a Robert Allan Ltd.-designed tug and our subsequent work with that fine company has always been “extra special”, including tugs of truly innovative and specialised designs with both VSP and Z-drive propulsion. Now the Dux, and her two sisters, will be the first dual-fuel escort tugs in the world.