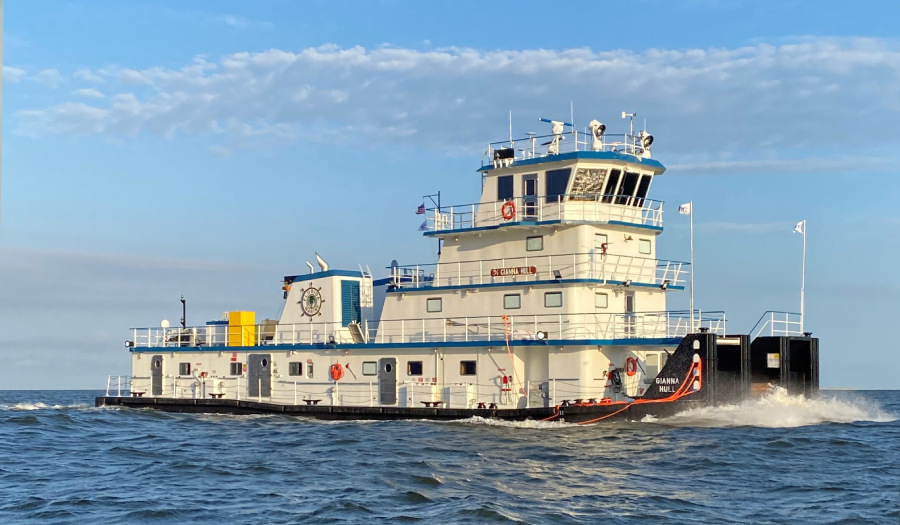 Metal Shark Boats, through its Metal Shark Alabama subsidiary, has delivered the third inland pusher tug in a series ordered by Florida Marine Transporters (FMT), a family-owned shipping company based in Mandeville, Louisiana.

The four-decked, welded-steel newbuild tug Gianna Hull was designed by John W. Gilbert Associates. Named after the granddaughter of FMT owner Dennis Pasentine, the vessel joins the company’s fleet of tugs, which will grow to 105 in the coming years to take on bulk cargo, hopper, and tank barge handling operations.

The delivery of Gianna Hull to FMT concludes a newbuilding contract for three pusher tugs awarded by the customer to Metal Shark in 2018. The first tug, Stephanie Pasentine, was delivered in April 2020, while the second vessel, Amy Pasentine, was delivered later that same year. All three vessels in the series are slated to support FMT’s various customers across a broad geographical scope that includes the Mississippi River, Lake Michigan, the Ohio Valley, and the Texas ports of Corpus Christi and Houston-Galveston.

Like its sisters, Gianna Hull has a length of 120 feet (36.5 metres), a beam of 35 feet (10.6 metres), a draught of 9.8 feet (three metres), and a pair of Caterpillar 3512C EPA Tier III-compliant diesel engines that each produce 2,000 hp (1,491 kW) at 1,600 rpm. The engines drive stainless steel fixed-pitch propellers via Twin Disc MGX-5600DR reverse reduction gears with a 6.56:1 ratio to propel the tug to a cruising speed of six knots. The fully redundant, electro-over-hydraulic steering system was supplied by EMI.

To ensure that the tug will be capable of sustained operations, FMT requested the installation of efficient main engines to guarantee improved fuel and lube consumption and reduced emissions. The owner believes these key attributes will then lead to optimal barge transportation economics and less downtime for unscheduled repairs.

Four Patterson electric winches are mounted forward of the superstructure: a 65-ton (58-tonne) winch and a 40-ton (36-tonne) winch are on both the port and starboard sides. Back aft is a two-ton (1.8-tonne) deck crane from Harrington Hoists while Schuyler Marine supplied the fendering. Hiller provided the vessel’s fixed fire protection equipment.

Electrical power for the onboard systems is supplied by a pair of John Deere 6090 generator sets that each have a rated output of 175 kW.

Accommodations and facilities have also been provided for a crew of nine. The spaces include six wood-lined staterooms spread over three decks. The chief engineer’s stateroom and office are on the main deck while three two-man staterooms and the captain’s stateroom are on the number one deck, while the pilot’s stateroom is on the number two deck. Adjacent to the galley is a fully furnished lounge.

To improve crew comfort by reducing noise and vibration levels in the cabins and the wheelhouse, acoustic dampening coating was applied to strategic areas. There is a split air conditioning and heating system, and heavy mineral wool insulation throughout for the crew’s comfort.