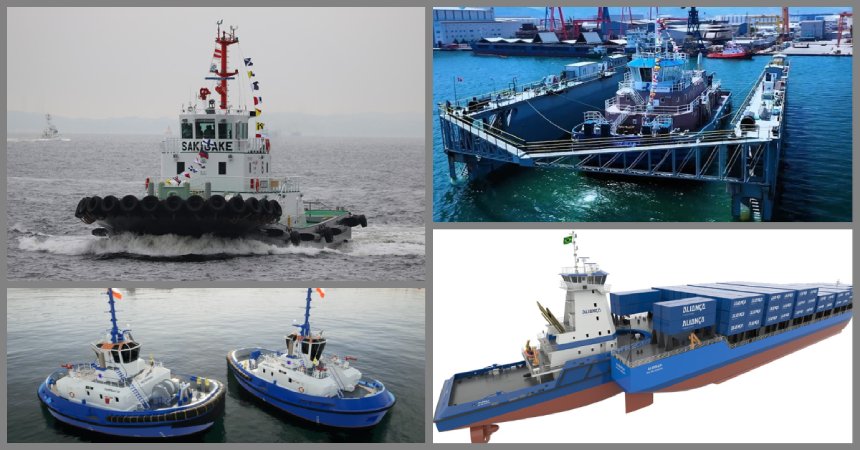 A new inland tug slated for a Brazilian operator is launched in Turkey while a Japanese shipowner will convert one of its existing towage assets to allow for ammonia-fuelled operations. Orders have also been placed by customers based in Brazil and Germany.

The Robert Allan Ltd-designed vessel will have an LOA of 45.6 metres in LOA, a beam of 16.5 metres, and diesel-electric propulsion that will deliver a bollard pull of 65 tonnes. The engines will also be capable of running on heavy fuel oil.

The tug will be operated in inland waterways in northern Brazil, where it will be used for barge handling duties.

Robert Allan Ltd has been awarded a contract by Brazilian shipyard Estaleiro Rio Maguari (ERM) to develop the design package for a new articulated tug and barge (ATB) unit for shipping containers along the coast of Brazil.

Two ATBs utilising the same design will be owned and operated by Aliança Navegação e Logística (ANL), a logistics services provider and part of the Maersk Group.

Robert Allan Ltd’s engineering team has been tasked with developing an ATB suitable for operations along the entire coast of Brazil, including the south where severe environmental conditions regularly occur.

Each tug will measure 37.5 by 13 metres and will be powered by two 3,200kW diesel engines driving Schottel Z-drives with 3.4-metre propellers. The design work on the tugs will comply with ABS class and Brazilian flag rules.

The barges will each measure 130 by 28 metres and have capacity for 700 TEUs.

Hamburg-based the Fairplay Towage Group has awarded the Damen Shipyards Group a contract for the construction of two RSD harbour tugs.

The new tugs will be equipped with powerful render recovery winches with auto tensioning systems, as well as FiFi1 firefighting systems. Fairplay has also voluntarily opted for the inclusion of Damen’s marine NOx reduction system to ensure compliance with IMO Tier III regulations.

The vessels will be delivered in January 2023 following completion of construction at Damen Song Cam Shipyard in Vietnam.


Nippon Yusen Kabushiki Kaisha (NYK) has entered into an angreement with Keihin Dock, a sister company under the NYK Group, for the modification of a tug to ammonia fuel specifications.

Sakigake, a tug currently fuelled by LNG and operated in Tokyo Bay by NYK company Shin-Nippon Kaiyosha Corporation, will be converted to operate on ammonia fuel with a target completion year of 2024.