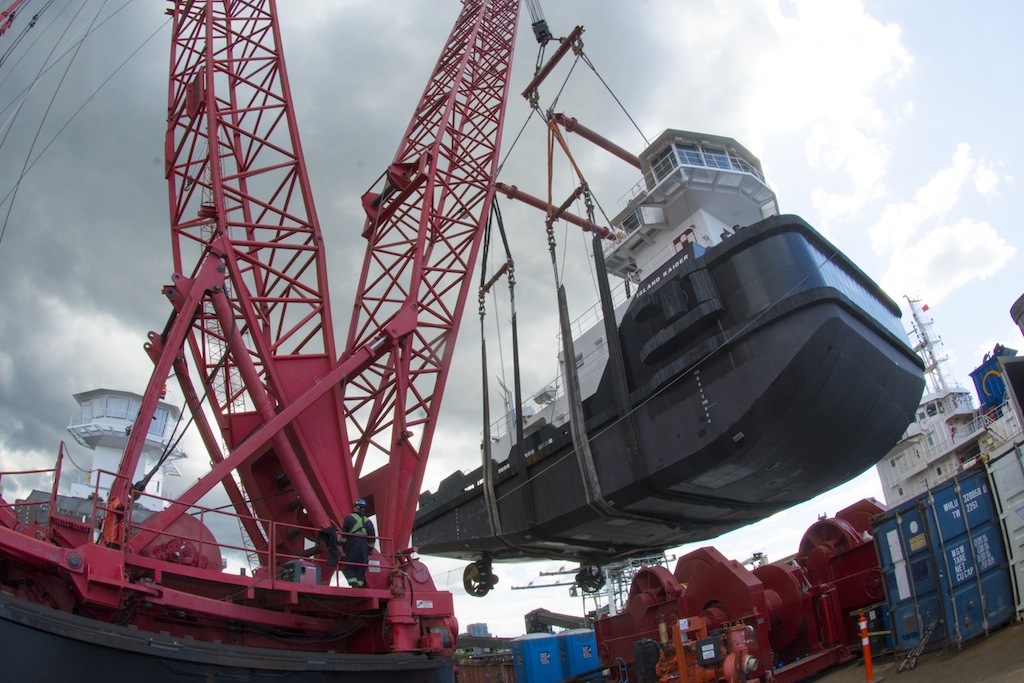 Vancouver, BC-based Island Tug and Barge, which has just been taken over by Tidewater Transportation and Terminals, recently launched a pair of tugs that will be matched with two of its existing barges. The two boats were built with pins for use in an articulated tug and barge application.

The vessels were built in a warehouse on the Fraser River. With no launching facility and a railway track between the yard and the steep bank of the river, it took some innovative heavy lifting.

At the yard, self-propelled modular transporters (SPMTs) were moved under the tug. They then rolled it over wooden beams laid overtop the railway tracks and on onto the 12,000DWT barge Dynamic Beast moored in the river.

The launch job was contracted to Mammoet and Dynamic Heavy Lift to roll-on and lift-off (“Ro-Lo”) the tugs. Both tugs were loaded onto Dynamic’s 100- by 37-metre barge which has a 900-tonne Manitowoc “ringer” crane mounted on an 18-metre-diameter ring as well as a 230-tonne Manitowoc crawler crane.

This delicate but massive Ro-Lo operation was completed over the weekend and the barge, with the two tugs on deck, was towed down the river and around to the Port of Vancouver, BC ready for a Monday launch.

Lifting two 380-tonne tugs, even with a 900-tonne capacity crane is no casual task. The Dynamic Heavy Lift crew put in a long day’s work preparing and setting the heavy cable straps according to a meticulously drawn diagram and set of specifications.

These included a series of three heavy spreader bars, each at right angles to the one above, supporting four double slings the extended under the 384-tonne tug’s hull at precisely determined positions. This divided the weight evenly.

By mid afternoon all was in place. A final safety check and procedural conference was called and about 20 men gathered in a circle to review roles and responsibilities. A detailed check list was run through and a designated signal man, Darin “Dawg” Ellis, was identified.

He would talk to the crane operator, Bob Miller, who had been restlessly prowling his huge red machine checking and rechecking details while positioning the huge spreader bars for the crew.

After a couple of final adjustments the word went to the crane operator to take up all the slack and begin the lift. Finally light showed between the wooden blocks set on steel pillars and the huge tug was airborne.

As had been planned the tug was lifted high enough to clear all equipment on the barge deck and finally over one end of the barge.

With crew members steadying the tug by lashing down heavy mooring lines the tug was steadied about six metres above the waters of Burrard Inlet and, with the crew that built her watching, she began a stately descent.

The build crew, who had been given the day off to watch their masterpiece meet the water, took selfies and smart phone pictures of the tug as she touched the water.

Then they jumped aboard before all the weight came off the slings to make sure that all was as it should be below decks.

Finally, after the all clear was given, the boat was lowered to her marks. It would be towed over to the owner’s dock where finally details of her completion were dealt with prior to sea trials.

If there was relief from stress on the part of the Mammoet and Dynamic Heavy Lift crew they didn’t show it. With quiet professionalism they began getting the rigging ready for the lift of the second tug.