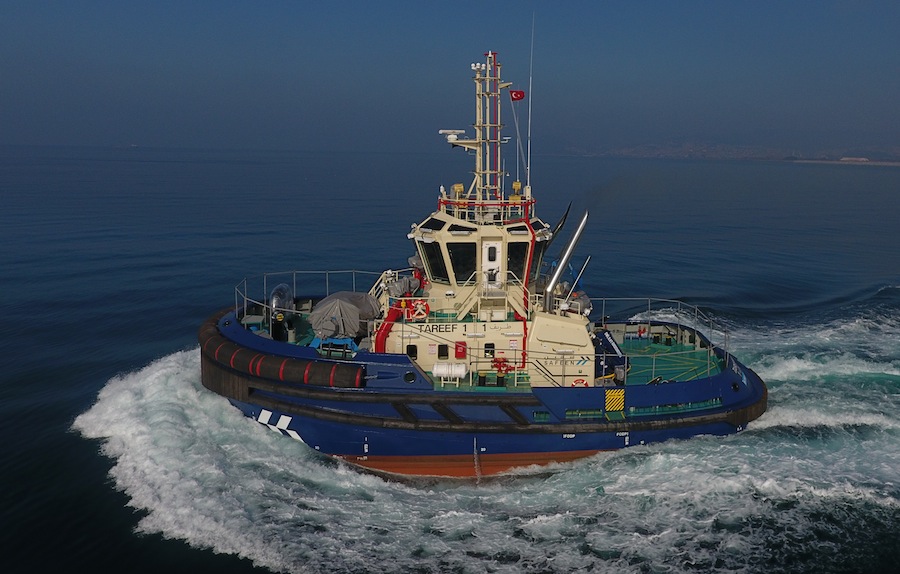 When United Arab Emirates port operator Abu Dhabi Ports Company recognised that it needed a compact yet highly versatile harbour tug to support its activities at Khalifa Port, it turned to Med Marine to satisfy this requirement. The result is Tareef 1 (“Unique 1”), the latest example of the Turkish builder’s series of ASD tugs that utilise a Robert Allan Ltd proprietary design introduced in 2017 and developed exclusively for manufacture by Med Marine.

Although this is Abu Dhabi Ports’ first time to order this model of tug, the long history of collaboration that the team of Med Marine and Robert Allan Ltd has had with various shipowners in the UAE enabled the two partners to develop an all-steel vessel that is capable of operations in the hot weather typical of the Middle East, thanks in part to a Heinen and Hopman HVAC system that also includes a secondary AC unit in the wheelhouse.

Perhaps more importantly though, the vessel is also well-suited to the conditions prevalent in Khalifa Port, which is the only dedicated facility that handles all seaborne container traffic that passes through Abu Dhabi – an estimated 2.5 million TEU in throughput every year. Hence, an LOA of only 23 metres, a design draught of only 3.15 metres, and precise manoeuvrability give Tareef 1 the freedom to sail more easily within the port’s narrow and shallow water areas while still being able to deliver a reasonable bollard pull of up to 60 tonnes.

Abu Dhabi Ports had earlier remarked that it opted for this model precisely because it guaranteed better performance and greater flexibility despite being smaller than most other models of 60-tonne bollard pull tug in the market today – an important attribute when considering the need to operate under port conditions similar to those in Khalifa.

Thus, even with the newbuild’s relatively compact size, it nonetheless possesses the versatility envisaged by its owners as it has also been equipped for a range of diverse duties that include coastal towing and firefighting in addition to its primary roles of ship handling and escort within the waters of Khalifa Port.

To adequately carry out its various intended functions, Tareef 1 comes equipped with a Kongsberg electric towing winch, a Toimil T-10500M deck crane with 10-tonne lifting capacity and eight-metre reach, and a firefighting pump with a capacity of 1,200 cubic metres of water per hour. Lifesaving equipment is supplied by Viking while many of the electronics including the radar, radio, GPS, and AIS transponder are from JRC.

Tareef 1 was delivered to Abu Dhabi Ports just three months after the signing of the contract with Med Marine.