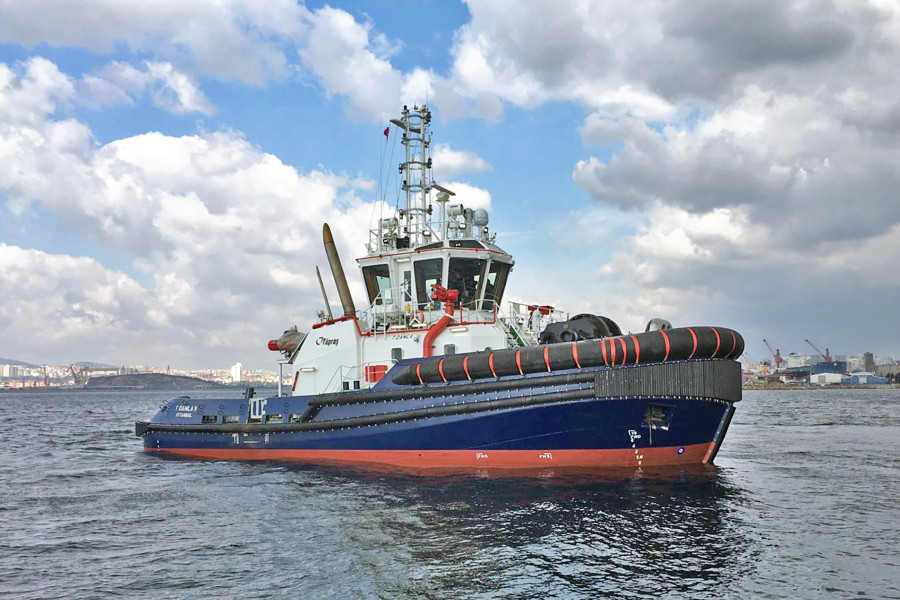 Classed by the American Bureau of Shipping and designed by Canadian naval architecture firm Robert Allan Ltd (RAL), T Damla 9 – as well as sister vessel T Damla 8, which was delivered by RMK earlier in 2020 – is a modified example of RAL’s 25- by 12-metre multi-purpose ASD tug.

“The tugs’ design is well-proven, having sold globally in large numbers,” RMK told Baird Maritime. “The vessels were designed to perform harbour and terminal operations and coastal towing under all weather conditions, but have also been modified to comply with the owner’s requirements for reduced draught.”

The reduced draught will enable the vessels to manoeuvre more effectively within the shallow and restricted waters of the Port of Aliaga in the Aegean Region of western Turkey. RMK said the tugs’ area of operations covering Aliaga and Izmit Bays is geographically small but often experiences a high volume of maritime traffic, hence the need for small vessels with tremendous power.

T Damla 8 and T Damla 9 each have an LOA of 25.4 metres, a moulded beam of 11.8 metres, a moulded depth of 4.6 metres, a draught of five metres, and accommodations for six crewmembers in MLC-compliant cabins that also include separate one-person cabins for the captain and the chief engineer. Also included in the onboard amenities are a galley and a mess/lounge area.

Power is provided by two MTU 16V4000M63L IMO Tier II-compliant diesel engines each rated 2,240 kW at 1,800 rpm. The engines are connected to a pair of Rolls-Royce US 255S controllable pitch azimuth drives through straight line carbon fibre shafts, and this gives each tug a bollard pull of 70 tonnes and a free sailing speed of 12 knots. The engine room on each tug is efficiently laid out and also has a separate switchboard room.

The wheelhouse has been designed with a single split control station for both ahead and astern operation. Both types of operation are aided by the unobstructed view of both the fore and aft decks. 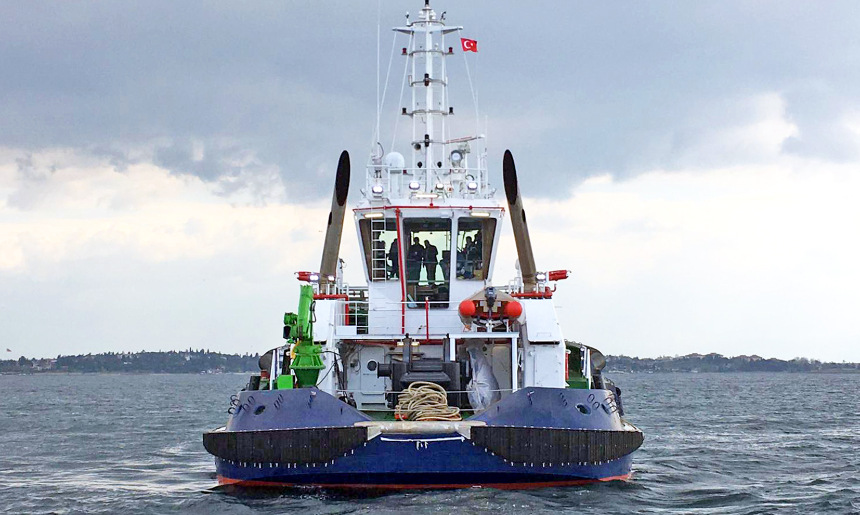 For towing duties, the tugs are equipped with Data Hidrolik equipment including two DTH 70-130 pneumatic-controlled towing hooks with safe working loads (SWL) of 75 tonnes each, two DTP 12 hydraulic towing pins, and two DFW 45x180HZ split drum hydraulic towing winches mounted on the fore and aft decks. Both winches are capable of first layer performance of 180 tonnes brake holding load and pulls of 45 tonnes at eight metres per minute and 10.5 tonnes at 32 metres per minute.

The aft deck also features a Toimil Garcia T-28500M/1 knuckle-boom deck crane with a reach of five metres and a lifting capacity of up to 28 tonnes.

Power for all deck machinery is drawn from a pair of packaged diesel generator sets supplied by Italian company Margen.

T Damla 8 and T Damla 9 have FiFi1 capability thanks to an IACS-approved firefighting system supplied by Marsis, which is also located in Istanbul. The system consists of two main engine PTO-driven pumpsets and two electric-powered, remote-operated monitors with seawater and foam capacities of 1,200 m³/h and 300 m³/h, respectively. The monitors are also designed to be operated manually if conditions permit i.e. in instances wherein the crew would not be put at risk while they are out on the deck during firefighting operations.

The tugs’ fendering systems were developed jointly by RAL and Slovakia-based Bencros to meet the owner’s requirements for maximum fender pressure. These fenders consist of a bow-mounted upper row of 1,000-mm diameter cylindrical fender tapering to 800-mm diameter at the sides and a lower course of W-fender. The bow and the stern are further protected by block fenders that have been custom-cut to fit the vessel lines, and both port and starboard sides have 300-mm D-fenders.

The tugs each have a comprehensive electronics suite consisting of X-band radar, a GPS compass and navigator, AIS, an echosounder, an autopilot, and VHF radios. RMK said the electronics selected would allow for efficient, simple, and reliable use, thus helping reduce the operators’ workload when sailing under demanding port conditions. 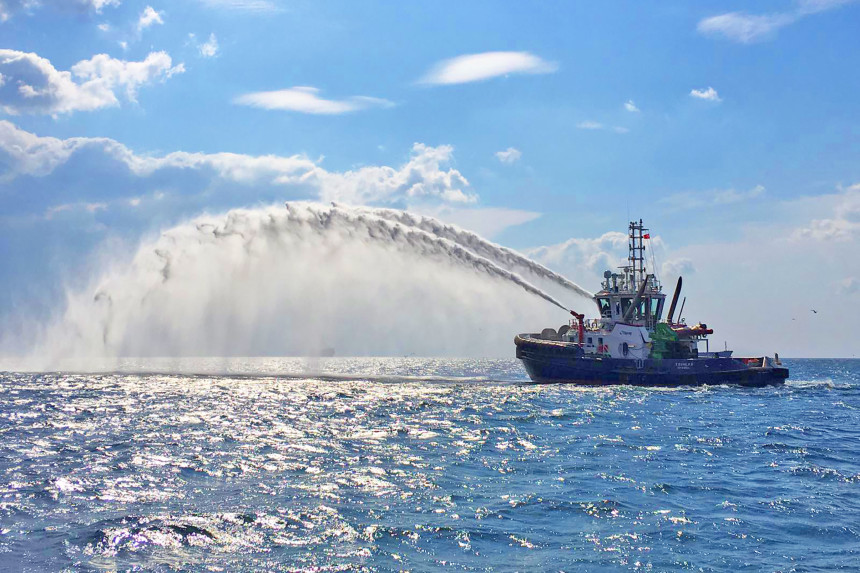 RMK said that, despite possessing impressive features and capabilities, the tugs posed challenges with regards to being able to satisfy all the requirements specified by the owner.

“The tugs needed to possess powerful propulsion systems for sufficient bollard pull but also had to be small and easy enough to manoeuvre in small, restricted areas through which plenty of other vessels pass on a daily basis. Fortunately, we were able to accomplish that in addition to ensuring available space on each tug for key equipment such as a deck crane and an efficient firefighting system.”

RMK added that its many years of having served the same client – during which it supplied the latter with an assortment of vessels including several product tankers and a nine-workboat package consisting of five mooring boats, two service boats, and two tugs – gave it the experience and know-how to fulfill this unique newbuilding order. It also enabled the builder to apply environment-friendly technology in the construction and eventual delivery.

“We learned it was important to establish robust lines of communication in order to understand the needs of our client starting from the very beginning,” RMK told Baird Maritime, “covering the design phase, construction, test and trials, delivery, and even during the warranty period. By performing this project, once more, we realised how important it was to gain and maintain the client’s satisfaction and trust. We will apply this same process to our future newbuilding projects.” 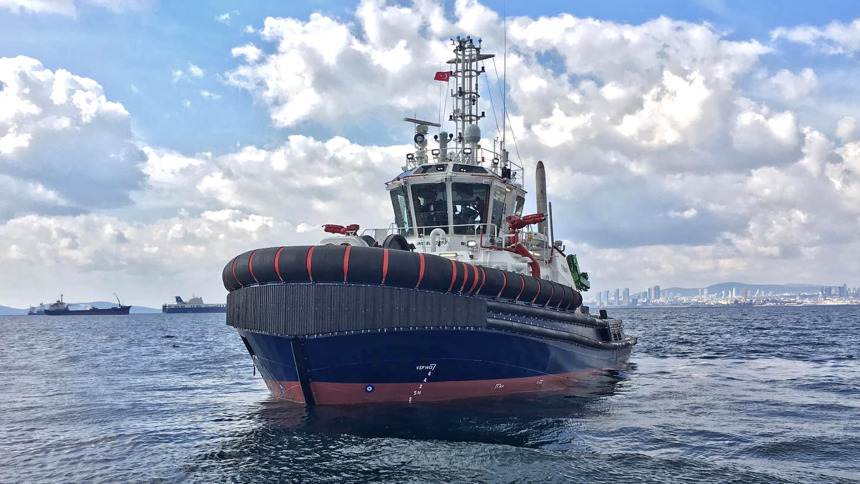 T Damla 8 and T Damla 9 have already begun operating alongside the other tugs, pilot boats, and mooring vessels in the T Damla Denizcilik fleet serving various clients in the Port of Aliaga. 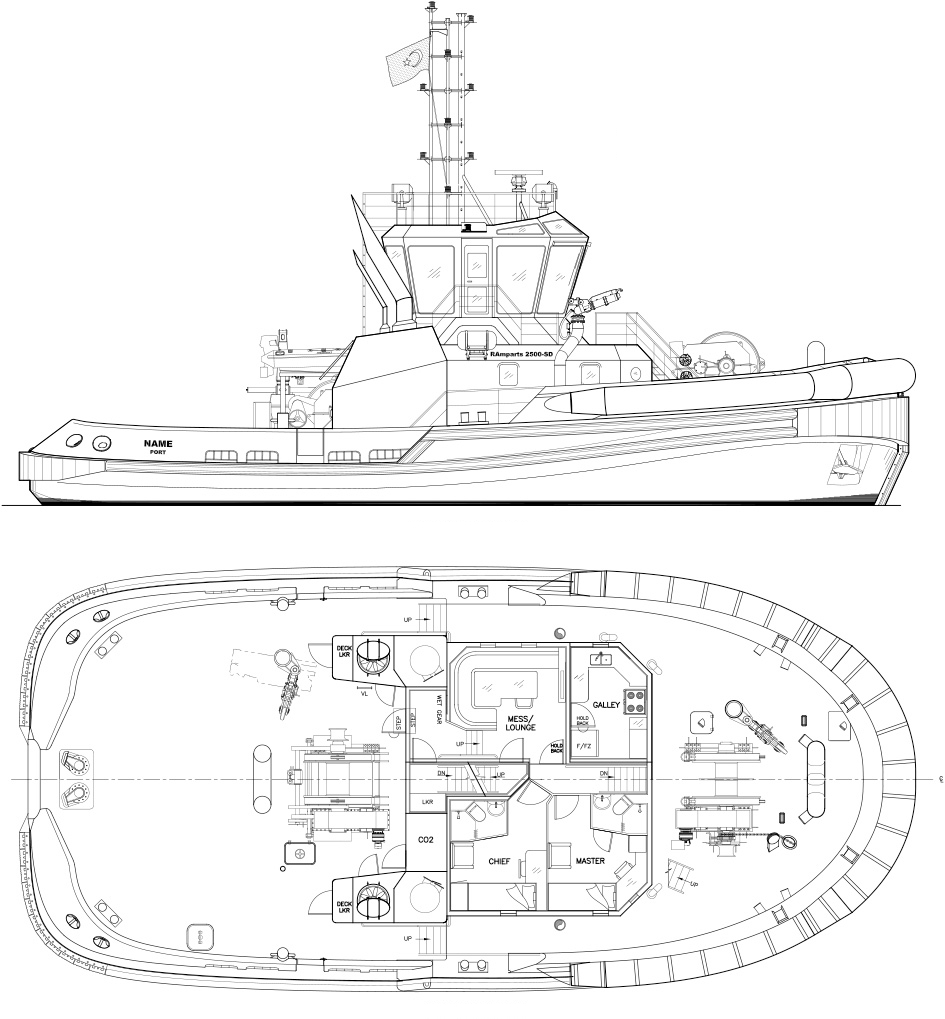