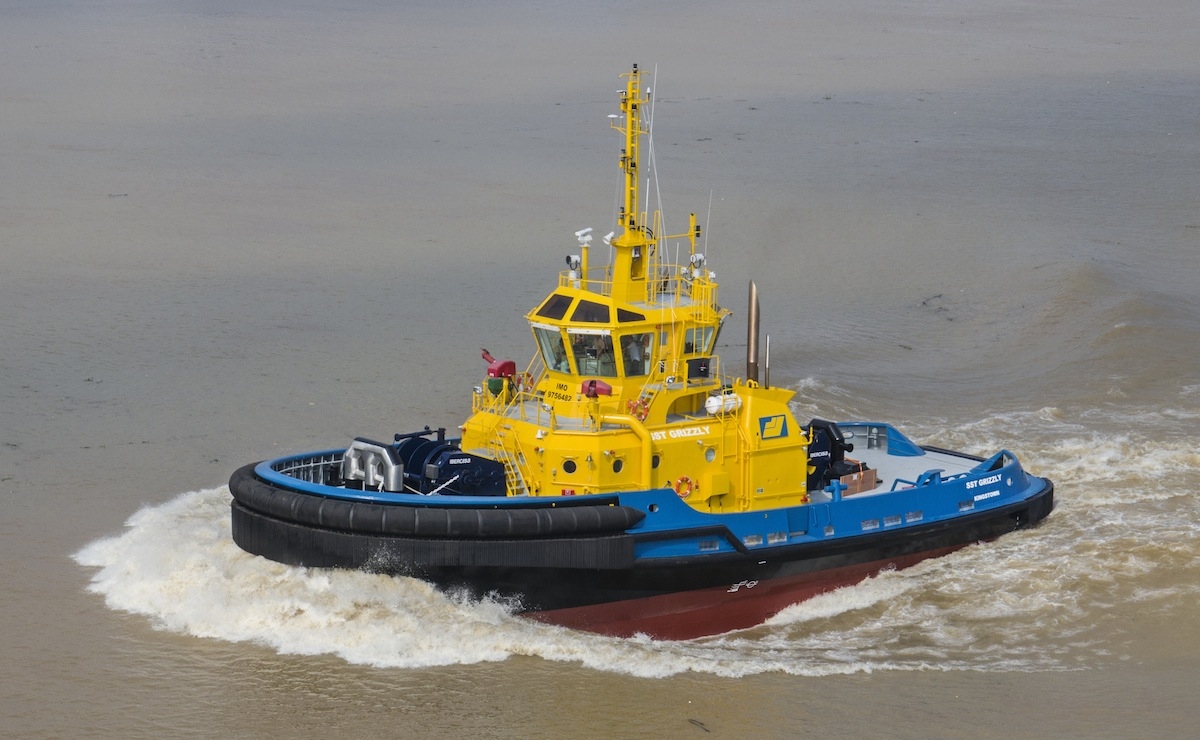 SAAM Smit Towage Canada (SST Canada), a joint venture partnership between Boskalis and SAAM of Chile, has recently completed the purchase of two new escort tugs from a Chinese yard.

SST Grizzly and SST Orca  will join SST Canada’s fleet and begin operations in the southern waters of British Columbia.

These tugs will be capable of safely performing all ship-handling roles, including berthing, unberthing, and escort duties, and will considerably increase the ability of the local tug fleet to handle anticipated increases in vessel traffic through British Columbia’s southern waters, especially in the context of escort towing.

These new tugs will become both the largest and most powerful escort-rated tugs in the region, with bollard pulls in excess of 80 tonnes, and the ability to generate high indirect escort forces at speeds of up to 10 knots, namely 82 tonnes in steering, and 130 tonnes in braking.

Complementing these impressive escort performance capabilities will be an equally capable double (split) drum 200kW electric escort towing winch by Ibercisa with an active haul-in and pay-out constant tension system, as well as data logging for aiding with timing of replacement of the 72mm diameter Amsteel Blue synthetic towlines.

The tugs are also both equipped with Ibercisa electric towing winches aft, spooled with 600 metres of 54mm diameter IWRC steel wire rope towline, thus boosting the capacity of the local tug fleet to rescue vessels and tow them to safety should they become disabled beyond where they would typically be actively assisted by escort tugs. 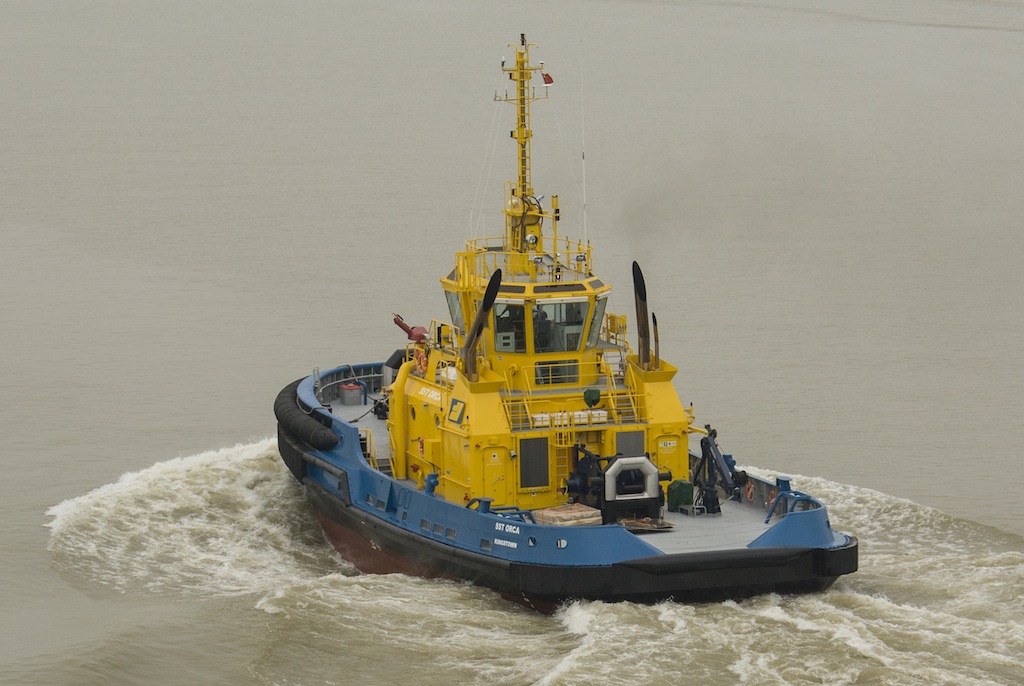 Specialised fendering systems designed to minimise contact pressures, along with folding masts both act to keep the risk of any steel-to-steel contact with assisted vessels with high flare to a minimum, while also assisting these vessels into terminals as gently as possible.

The main propulsion machinery comprises a pair of Caterpillar 3516C diesel engines, each rated for 2,525 kW at 1,800 rpm, driving 2.8-metre diameter controllable pitch Schottel SRP 4000CP Z-drives. This propulsion plant propels these tugs at speeds in excess of 13.5 knots, thus allowing them to comfortably keep pace and manoeuvre into position during high-speed escorts.

The electric deck machinery combined with the house loads are powered by a pair of 200ekW Caterpillar C9 gensets, and the tug is also equipped with a smaller C4.4 harbour genset, rated for 51.5 ekW.

Comfortable MLC-2006 compliant accommodations are provided for up to ten crew members, although since crewing levels will be significantly lower for the vast majority of operations as a sub-500 GRT tug, single occupancy cabins will generally be available to the crews.

The tugs also feature well-appointed mess/lounge and galley spaces, and a dedicated space for wet gear immediately adjacent to the entry lobby, which will help to keep the interior spaces dry and tidy in the notoriously wet environment on the west coast of Canada. 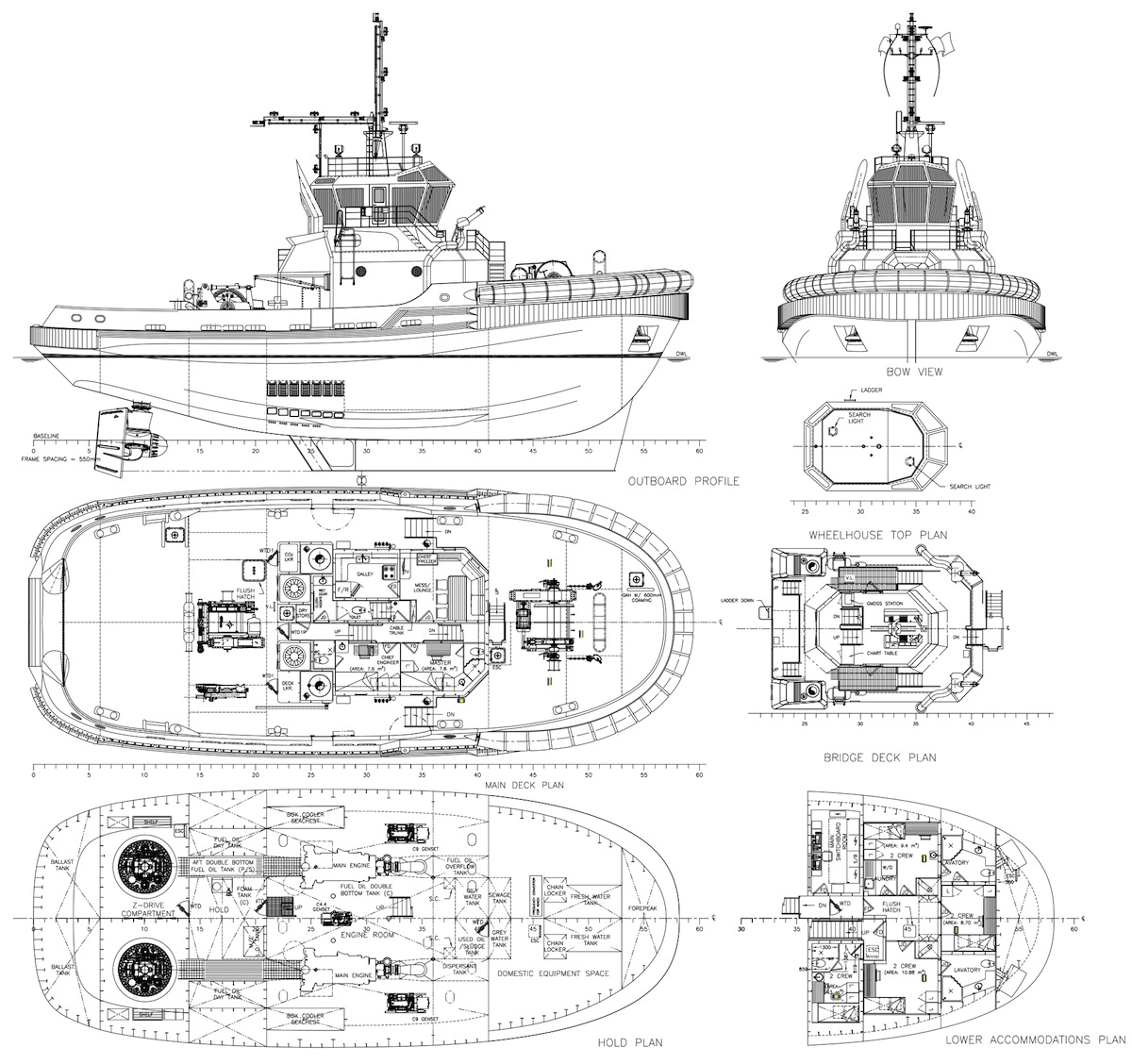