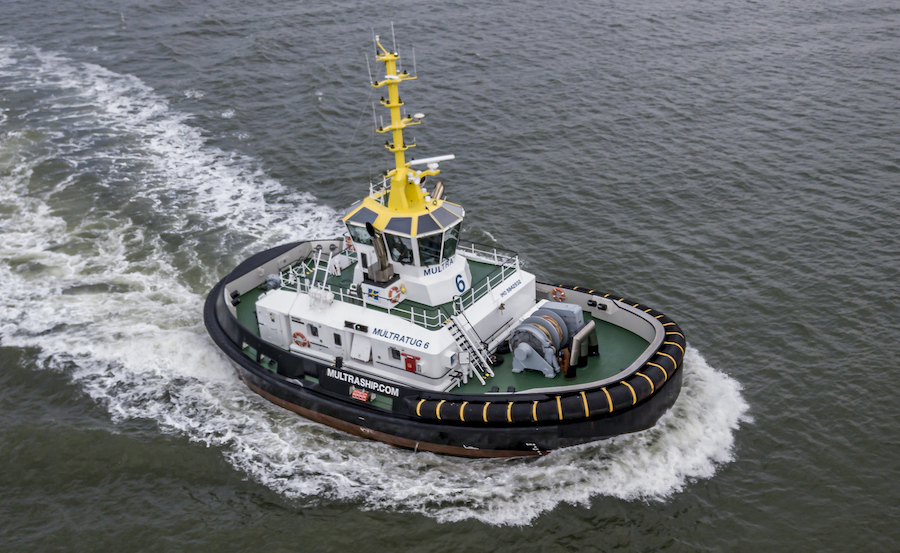 As well as requiring additional tonnage, the owner specifically wanted to reduce emissions and increase crew comfort by reducing noise and vibration levels.

“We take responsibility for the environment and this is the reason that we have chosen an IMO Tier III-compliant vessel, the first of its kind in Europe,” commented Multraship Managing Director Leendert Muller. “This is also in tune with the increasing demand from local port authorities for clean operations.”

An efficient vessel, both as bow assisting vessel and stern assisting vessel, Multratug 6 is ultimately a mix between tractor tug and ASD. Compact and powerful, it will enable bigger container vessels to enter confined areas, while meeting compliance with future regulations.

Damen has built up extensive experience of how to minimise onboard vibrations from its work in the superyacht and naval vessel sectors, and has been successfully able to translate this to the design of Multratug 6 and future sisterships.

According to Damen, the key to the development of this tug was to come up with an answer for the challenges its customers were faced with: flexibility, efficient operations, high power in compact vessels, and this all in a safer way than ever before.

“This required open minds, discussions with the industry, from suppliers, through research institutes to customers and actual users,” Damen told Baird Maritime. “The result is a true innovation, featuring future-proof characteristics that run throughout the design, build and operation of the vessel.”

The always-bow-first principle offers the flexibility for the vessel to operate optimally as both a bow and stern assisting tug. The twin fin skeg generates high towing performance at low engine power, resulting in a overall fuel consumption. The twin fin also provides significantly improved manoeuvrability for ease of use in confined harbours.

Damen said that the biggest challenge in building the vessel was the fully shaped hull form and glued superstructure, incorporated to reduce noise and vibrations. As a result of the experience building Multratug 6, the twin fin will be applied on more vessel types, as it has proven to ensure predictable and stable sailing performance (directional stability), which is at stake when moving to more compact vessels. As the need is for compactness, twin fins are necessary to ensure this stable behavior and with that the safe operation of the vessel.

Multratug 6 is the first European tug with a conventional propulsion system to comply with IMO Tier III regulations based on a SCR system. Multraship also wanted to be beyond compliance with stability regulations that will be applicable for tugs from 2020 onwards and IMO emission areas.

It has been designed and optimised for the specific sailing profile of a vessel, and is able to operate on both high and low loads in ambient conditions from -30⁰C up to 45⁰C. Its robust design is suitable for high sulphur fuels (DMA ISO 8217:2017) capable of using both automotive (AUS32) and marine quality urea (AUS40).

Combined with 45dB(A) silencers, the system limits the emissions of NOX and noise, thus contributing to a healthier and more sustainable environment, especially close to urban areas such as in ports.

Multratug 6 features a Praxis automation system with Damen in-house developed “human machine interface” on top, which gives the crew the relevant information when it is needed and where it is needed.

“Damen Digital” is the gateway where all data from systems and equipment aboard the tug is channeled. This includes remote monitoring of fuel consumption and equipment performance.

The towing winch is a hydraulically driven split drum model, capable of 31 tonnes pull at up to 11 metres per minute, and reduced pull up to 38 metres per minute. It features stepless speed/torque for smoother towline handling.

Accommodation is provided for four persons, completely insulated and finished with durable modern linings, and a sound-absorbing ceiling in the wheelhouse and floating floors.The wheelhouse, accommodation and switchboard room are all air-conditioned. Accommodation is located above above the main deck with a captain’s cabin, chief engineer’s cabin, one double crew cabin, pantry, mess/dayroom and sanitary facilities. The superstructure is mounted resiliently to reduce noise levels.

Like most of Multraship’s port tugs, Multratug 6 is also capable of working at sea. 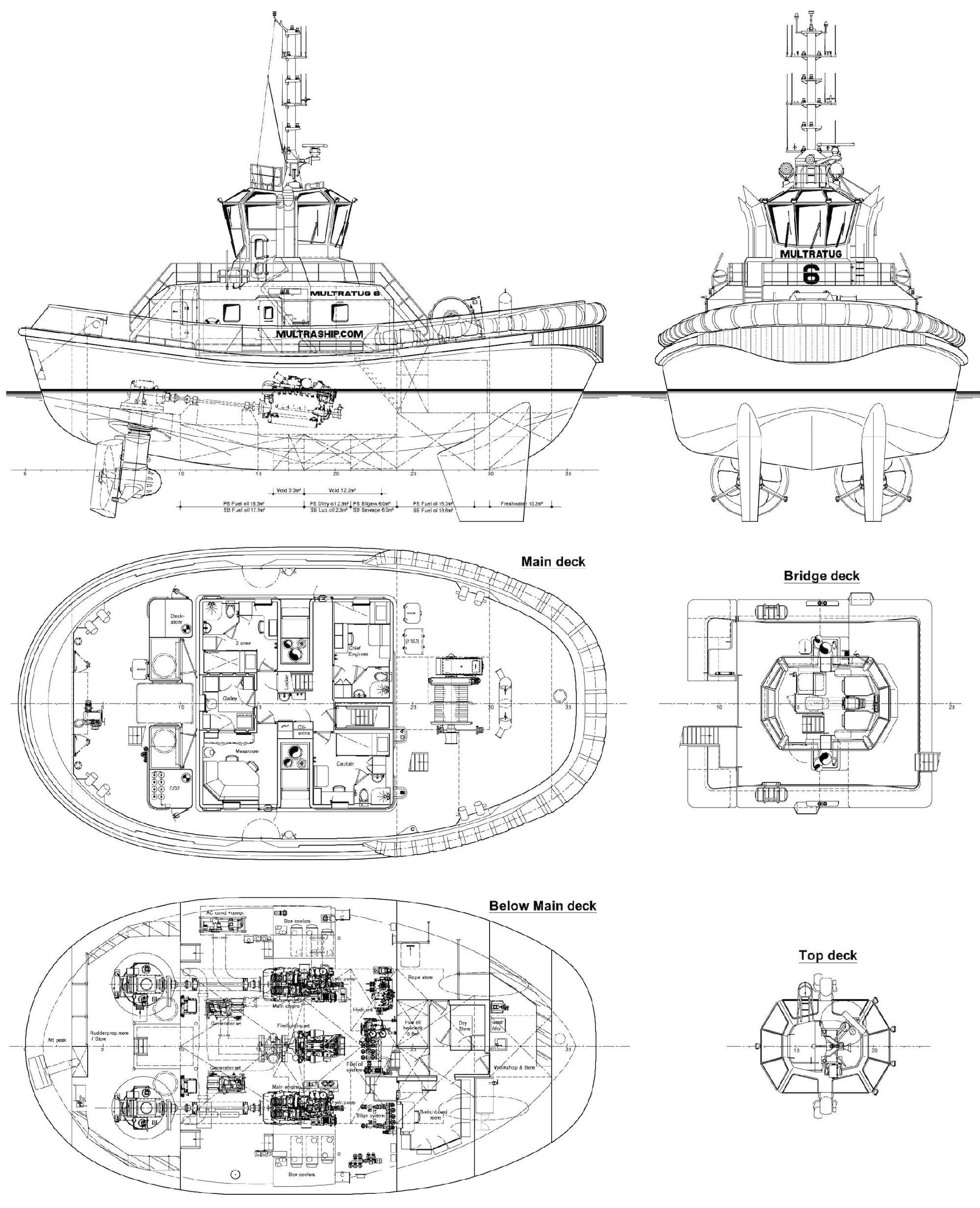