Netherlands-based shipbuilder Neptune Marine has delivered a new shallow-draught, multi-purpose harbour tractor tug to Verbeke Shipping, a family-run towage and dredging company that operates out of the Port of Antwerp in Belgium. The bespoke newbuild has been named Condor in honour of a similarly named tug that had been operated in the early 1900s by the great-grandfather of Marnix Verbeke, the current owner of the company.

The new Condor has a length of 24 metres, a beam of 10 metres, a draught of four metres, and two Caterpillar C32 main diesel engines that each produce 970 kW to turn a pair of Voith Schneider propellers. This configuration provides the tug with a bollard pull of 27 tonnes, a maximum speed of 11 knots, and excellent manoeuvrability that is essential in the more restrictive waters of its home port. The engines were chosen for their IMO Tier III-compliant attributes, as the owner wanted a propulsion arrangement that would guarantee significantly lower emissions as well as offer improved reliability. 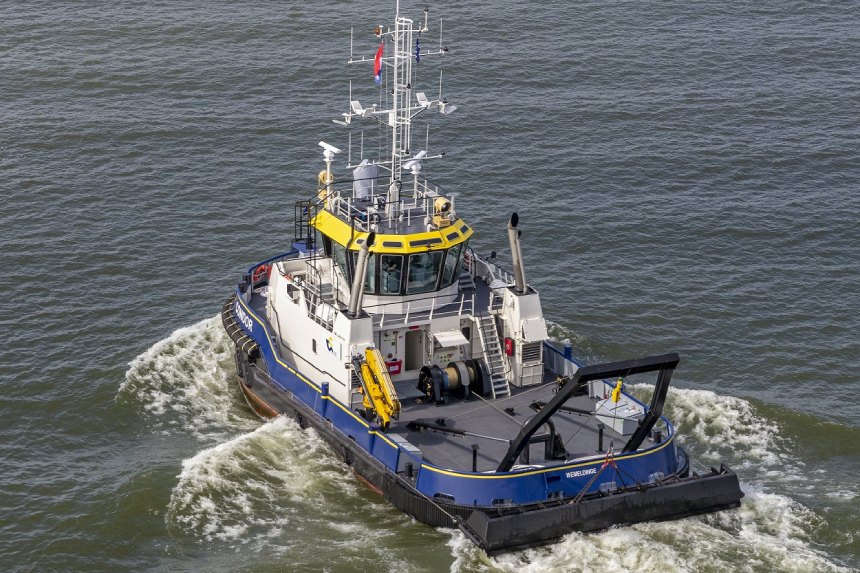 The tug also boasts a pair of Volvo D7A generator sets, a 60-tonne winch for towing and other duties, a dredging plough mounted on a folding A-frame, and a compact folding crane on the aft deck. The spacious aft deck may also accommodate a variety of light cargo and equipment necessary for performing various tasks that also include anchor handling and resupply.

Thanks to the tug’s design, which was developed with the goal of improving the vessel’s ability to mobilise rapidly, Condor is suitable for a range of duties requiring shortened response times within its area of operations that encompasses both the coastal and the offshore waters of the second-largest seaport in Europe.

The tug’s wheelhouse provides the bridge crew with a full 360 degrees of visibility to enhance their situational awareness of all the activity in the surrounding waters. This visibility also proves useful when supervising operations on the aft deck, where a significant portion of the work takes place. Mounted on top of the wheelhouse is a set of searchlights provided by Seematz.

Condor was designed in compliance to Bureau Veritas class rules and was built entirely at Neptune Marine’s Aalst facilities just south of Eindhoven with barely 12 months elapsing between the laying of its keel and its completion. The tug is being operated out of the Port of Antwerp alongside five other vessels in Verbeke’s current active fleet, which includes a flat-top cargo barge that had also been built by Neptune.