Written by Baird Maritime on November 29, 2022. Posted in Harbour Tugs and Operation. 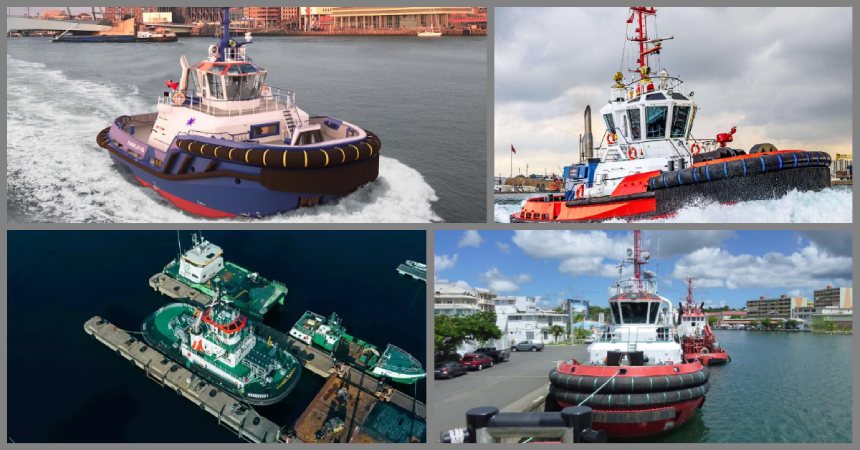 Recent deliveries include two to a UK towage operator and one to a port company in France’s Guadeloupe territory in the Caribbean. Customers in the Americas and Western Europe will meanwhile expand their respective fleets following upcoming hand-overs. Finally, a new hydrogen-powered tug is undergoing additional trials before it formally enters service early next year.

UK towage company SMS Towage has taken delivery of two tugs in a series from Sanmar Shipyards of Turkey.

The RINA-classed, Robert Allan Ltd-designed tugs were formerly operated by Sanmar’s own towage fleet. Upon acquisition by SMS Towage, the vessels were renamed Trueman and Kingsman.

Each tug has an LOA of 22.4 metres, a moulded beam of 10.84 metres, and a navigational draught of 4.85 metres. Two Caterpillar 3512C 1,500kW diesel engines drive Schottel azimuthing thrusters to deliver a bollard pull of 52 tonnes and a free running speed of 11.5 knots.

The tugs are also fitted with firefighting pumps.

A new hydrogen-fuelled tug recently arrived at the Port of Ostend in Belgium to allow installation and testing of its hydrogen propulsion system.

Built by Armon Shipyard in Spain to a design by Belgium’s CMB.Tech, Hydrotug 1 will serve the Port of Antwerp-Bruges once it becomes fully operational in the first quarter of 2023.

The tug’s propulsion system consists of two BeHydro V12 dual-fuel, medium-speed engines that can run on both hydrogen and traditional fuel. The tug can store 415 kilograms of compressed hydrogen in six stillages installed on deck.

Caraibes Remorquage, a port operator in the French overseas territory of Guadeloupe, has taken delivery of a new harbour tug built by Piriou Vietnam.

Pointe Vigie 2 will be used primarily to assist large container vessels calling at the Port of Pointe-a-Pitre. Secondary duties will include firefighting.

The tug has a length of 30.3 metres and two diesel 1,902kW diesel engines that deliver a bollard pull of 60 tonnes.

Svitzer Americas will soon take delivery of two new tugs from overseas shipyards to expand its towage operations in the Bahamas and the Dominican Republic.

Svitzer Isabela, which will be deployed to the Dominican Republic, is named after the first established Spanish town in the country. It is a 70 tonnes bollard pull ASD tug built by Turkey’s Sanmar Shipyards to a Robert Allan Ltd design.

Svitzer Abaco, which will be deployed to the Bahamas, is also a 70 tonnes bollard pull ASD tug but utilising a Damen 23-metre design. It is named after a Bahamian Island and will be delivered by Damen Song Cam Shipyard in Vietnam.

German operator the Fairplay Towage Group will deploy its newest ASD tug to serve the Port of Rotterdam in the Netherlands.

Delivery is scheduled to take place before the end of the year.