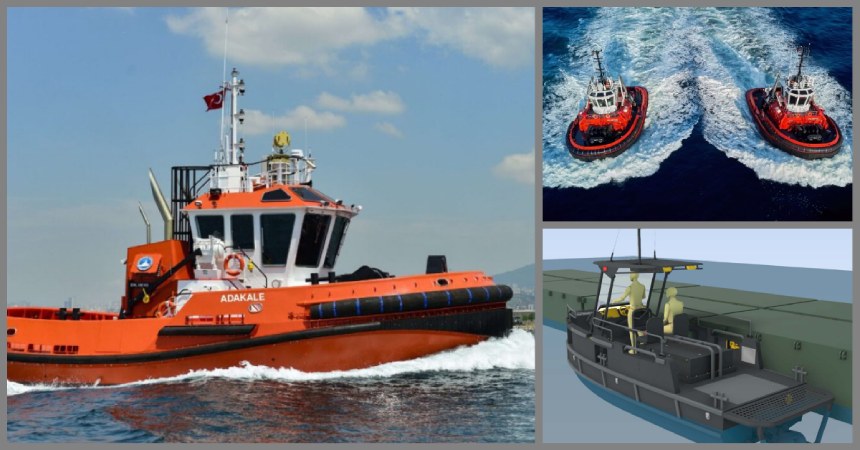 A Turkish shipyard delivers three new tugs to local and overseas customers while a Finnish manufacturer secures an order from Norway’s armed forces.

Turkey’s Sanmar Shipyards completed three tug deliveries to two separate operators in Turkey and Italy at the end of December 2022.

Turkish operator Marin Tug and Pilot expanded its towage fleet with the acquisition of Adakale, a compact tug used for line handling and ship handling. The ABS-classed, 18.7- by 9.2-metre vessel is capable of ship assist work over the bow whereas general towing can be done over the bow or the stern.

Two Caterpillar C32 970kW engines deliver a bollard pull of 32 tonnes and a speed of 12 knots.

The other two tug deliveries were to Italian towage provider Rimorchiatori Augusta. Sister vessels Citta di Augusta and Citta di Siracusa each measure 24.4 by 12 metres and are capable of a free running speed of 12 knots and a bollard pull of over 60 tonnes courtesy of two Caterpillar 3512E 1,901kW engines.

The two tugs can also each accommodate a crew of six and are fitted with FiFi1 firefighting equipment.

The Norwegian Defence Materiel Agency (Forsvarsmateriell; FMV) has awarded Finnish boat builder Kewatec Aluboat a NOK60 million (US$5.94 million) contract for the construction of 12 new tugs in a series.

The boats will be used by the Norwegian Army for light towing and for supporting the construction of floating bridges.

Deliveries are scheduled to commence in 2024. The newbuilds will replace earlier tugs that have been in use by the army since the early 1980s.