Tug and Salvage Vessel News Roundup | December 13 – Newbuildings in China, US and the UAE plus methanol-powered vessels 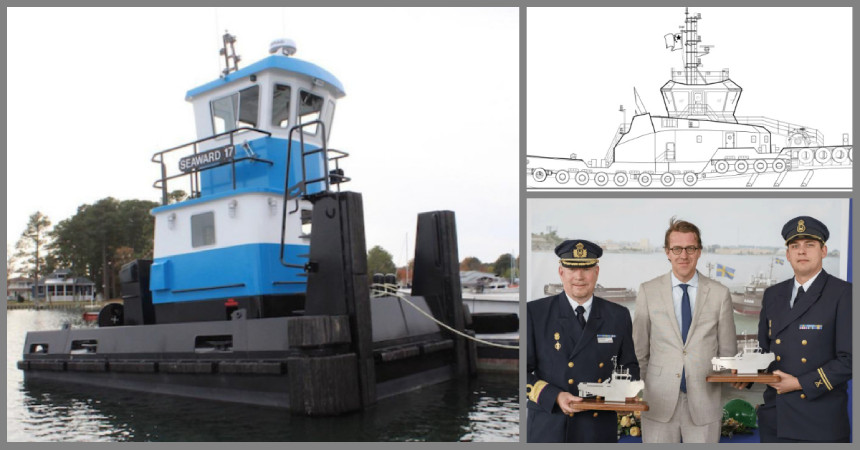 Construction has commenced on new harbour tugs for a Chinese port and the Swedish Royal Navy. Development is also underway on a compact multi-role vessel suitable for inland waters in the United States. Lastly, a Dutch builder is set to introduce a new series of tugs that will operate on methanol fuel in addition to conventional diesel.

Albwardy Damen in the UAE has laid the keels of four new tugs in a series slated for the Swedish Royal Navy.

The 17-metre ice-class vessels will be used for harbour support duties in temperatures as low as minus 20 degrees Celsius along Sweden’s northern coast. The wheelhouse on each tug will be fitted with double glazing while all interiors will have high-capacity heating systems.

The tugs’ navigation lights will also be heated to prevent buildup of ice and snow while the hulls will be protected by an extra-robust coating system to withstand the chafing of ice along the waterline.

Deliveries are scheduled to begin in 2023.

The contract for the new tugs also includes options for an additional two vessels.

Canadian naval architecture firm Robert Allan Ltd (RAL) has been awarded a contract by Tianjin Port in China for the design of two new ASD tugs.

The vessels will be built by Jiangsu Zhenjiang Shipyard for delivery in the fourth quarter of 2023.

The tugs will be the tenth and eleventh to be designed by RAL for the same customer.

The Damen Shipyards Group, Caterpillar, and Pon Power have entered into a memorandum of understanding (MOU) for the joint development of a series of dual-fuel methanol/diesel-powered tugs.

The project’s aim is to have methanol-powered tugs to be ready for series production by 2026.

The tugs will be available in different variants with bollard pulls of 60, 80, and 100 tonnes. All the vessels will be equipped with a standard emission reduction system developed and delivered by Damen Sustainable Solutions.

Fully electric, truck-transportable tug under development in US

The Elliott Bay Design Group (EBDG) of Seattle and shipbuilder Miller Marine of Deltaville, Virginia, will collaborate on the design and construction of a fully electric, truck-transportable tug.

The vessel is purposely designed as a multi-functional utility boat to support marine construction and dredging activities in addition to performing buoy maintenance, line handling, and short-range passenger and crew transport.

The tug will have an overall length of just under 26 feet (7.92 metres) and will be powered by two permanent magnet motors with a total output of 400 hp (298 kW). Shore power will be used to recharge the vessel’s battery banks overnight.

On a full charge, the tug will be able to operate for up to 12 hours. A closed-loop fluid cooling system will provide temperature control of the batteries, motors, and electronics.