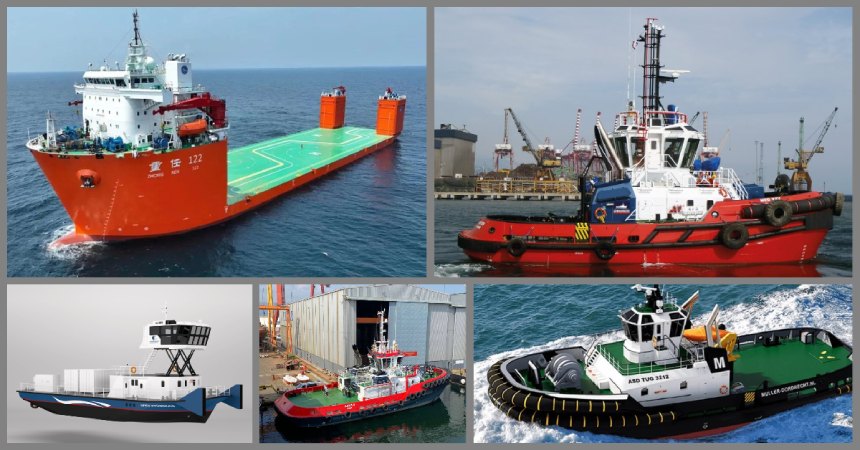 A Chinese government agency expands its salvage fleet with the delivery of a multi-role heavy transport vessel while a Dutch towage provider acquires a tug that was formerly operated in Turkey. Orders are placed for new ASD tugs for use in Brazil and the Netherlands. Lastly, a Lithuanian firm seeks to introduce a new low-emission barge handling vessel in the country’s inland waterways.

The newbuild will be operated by the Shanghai Salvage Bureau. It will also perform transport of damaged vessels as well as transport of components used in offshore oil, gas, and renewables construction projects.

Design work on Zhongren 122 was done in compliance to China Classification Society rules.

Wagenborg Towage has acquired a tug for operation in the Eemshaven and Ems regions of the Netherlands.

The tug will be named Waterlines and will be the largest tug in the fleet of Wagenborg Towage, which currently consists of six vessels operating mainly in the Netherlands and Germany.

The 80-tonnes bollard pull tug was built in 2020 by Uzmar Shipyard in Turkey.

The 26-metre vessel will be able to sail up to 300 kilometres on a single full charge of the batteries. A separate 5kW wind turbine generator will supply power for the lighting and other electrical systems in the crew accommodation spaces.

Construction and delivery are scheduled for 2023. The tug will be operated by the Lithuanian Inland Waterways Authority.

Svitzer to get two additional newbuildings for Brazil operations

Svitzer has placed an order for two new tugs to expand its towage operations in Brazil.

The tugs will be built in Brazil by Estaleiro Rio Maguari and are scheduled for delivery in 2024.

The tugs will be designed by Robert Allan Ltd and will each have a length of 23 metres and a bollard pull of 70 tonnes.

Rotterdam-based towage provider Muller Dordrecht has awarded the Damen Shipyards Group a contract for the supply of a new ASD tug to be operated in the North Sea.

The tug is being built at Damen Song Cam Shipyard in Vietnam and is scheduled for delivery within nine months of the initial contract signing.

The vessel will have a length of 32 metres, an IMO Tier III exhaust aftertreatment system, and a winterisation package to enable operations at high latitudes.