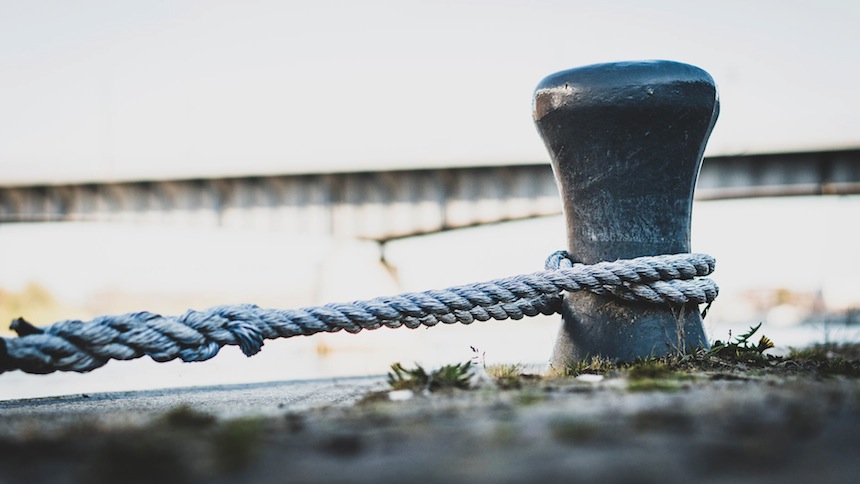 I was reading a recent account of a lively time in a major European port, in one of the winter storms that are being blamed on climate change, but may also have something to do with port designers not thinking shelter from the wind is important.

Despite the best efforts of tugs to keep them alongside, there were containerships blowing off their berths, causing absolute mayhem, for several hours. You would have liked to have been a fly on the wall of the VTS station, as one emergency succeeded another and shipmasters and tug skippers, lines handlers and boatmen were all going berserk.

It was also interesting to read, in the aftermath of this event, which I suppose we can almost term a “climate emergency” that very few of the lines that were supposed to hold these huge slabs of ships alongside, parted.

Made of some amazing new material with an astonishing breaking strain, they were actually tearing the bollards out of the concrete of the quay wall, and even ripping the bitts out of their fastenings on the steel mooring decks of their ships.

There was a picture of a whole hefty ring fairlead that had been wrenched out of the poop of some ship and which slid alarmingly down the taut towing line, to end up on the afterdeck of the tug, with a shower of sparks and an almighty clang. If I had been the tug skipper, I would have refused to give it back, after frightening my sailors out of their wits.

“The boatswain’s mate spent half his life splicing these ropes”

Apparently, you have to have all the mooring equipment these days labelled with its safe working loads, although how you can work out when a bollard will be torn out of the dock or deck, I cannot begin to understand. Classification societies will have experts available who can understand these scientific matters of modern seamanship.

It is an example of how clever the people who make mooring lines have been in recent years, with ingenious new materials offering tremendous strength without vastly increasing the diameters of the lines. I suppose if it was not for this appliance of science, mooring ropes aboard these monstrous containerships would be so huge and heavy that you couldn’t actually handle them.

It is an embarrassing confession of my age but my seafaring was undertaken when almost all of the cordage aboard most ships I sailed in was made of Manilla, which is endorsed in my 1956 Nicholls’ Seamanship and Nautical Knowledge as “glossy, smooth and pliable and good”.

Sisal, which also made an appearance on our ships was said to be “stiff and harsh”, but was often worked into our mooring ropes to give them a bit more grip. We had miles of the stuff on board, with the derrick guys, the falls on the lifeboats on our older ladies, up to the mooring lines themselves. The boatswain’s mate spent half his life splicing these ropes; end for ending them to make them last a bit longer, and at the end of their lives, salvaging them for rope yarns.

“They weren’t popular, for obvious reasons and the tugs didn’t like them either.”

Unlike modern lines, which cost an arm and a leg and can only be handled by experts, the old Manilla mooring ropes and springs we used could be repaired when they were damaged and we all learned at some stage of our apprenticeship, to splice them, I saw a lignum vitae fid in an antique shop recently, at a remarkable price, although nobody knew what it was.

But even then, the times they were a-changing and we saw the introduction of nylon – used as eyes in the towing lines, appearing. They weren’t popular, for obvious reasons and the tugs didn’t like them either.

I can also remember, aboard one ship, the arrival of a new “polypropylene” mooring rope down aft, which we were told was the rope of the future. At first sight, it didn’t seem that different to our other lines, as it was about the same size although hairy and less prone to kinks. We learned some of its more curious properties when we were using it as a towrope to the after tug, which managed to get itself stuck across the lock we were moving out of.

Despite our urgent screams to the pilot, the ship continued to move ahead and the rope stretched in an alarming fashion, smaller and smaller its diameter shrank, as the line grew tighter and tighter and eventually set fire to the paint around the bitts.

We should, in hindsight, have cleared the afterdeck like lightning, but unfamiliar with the characteristics of this exciting new material, we stupidly stood and looked at it. The Lamptrimmer even threw a bucket of water over it to dowse the flames, and just at that moment, the tug managed to extricate itself and the emergency was over.

Eventually, as synthetics became more common, we learned other properties of these new ropes. They were, for instance, subject to ultra-violet degradation, so you shouldn’t leave them out in the sun.

There was a tall tale of a rascally Mate who sold a new synthetic line in Suez and claimed that it had been in the sun too long and simply vanished. But Manilla, alas, seems to have gone forever. In my attic I have a set of Manilla deck quoits and just the smell of them takes me back to rope stores, aboard ship, more than sixty years ago.