Written by Baird Maritime on January 21, 2021. Posted in Firefighting, Harbour Tugs and Operation. 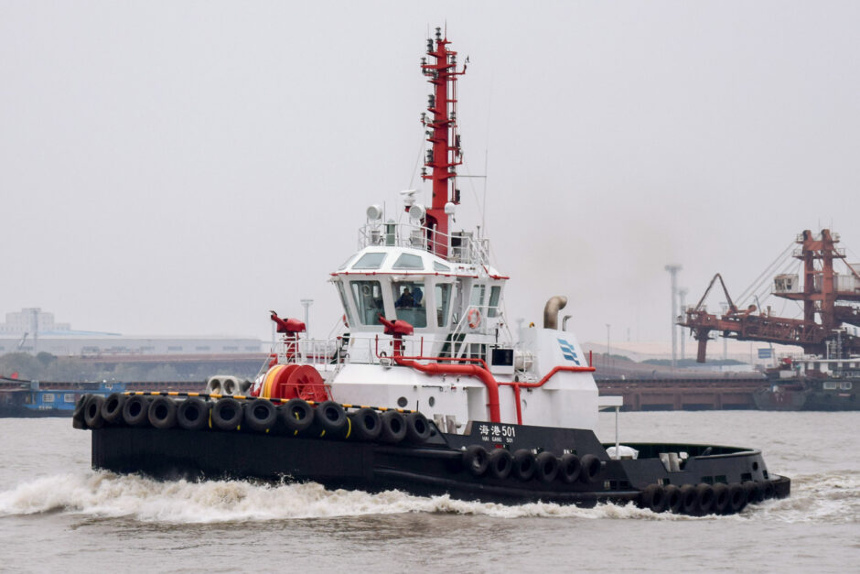 China’s Sanlin Shipyard has delivered a new harbour tug to the Port of Shanghai.

The tug has an LOA of 32 metres, a moulded beam of 12 metres, and a maximum draught of 5.29 metres. There are also MLC-compliant accommodations for up to 10 crewmembers including six single cabins and a pair of two-person cabins in the deckhouse and lower deck.

Main propulsion for the tug comprises a pair of Niigata 6L28HX main engines, each rated 1,840 kW at 750 rpm. These drive cardan shaft systems connected to two Niigata ZP-41A propulsion units with 2,600-millimetre fixed-pitch propellers to give the tug a bollard pull of 68 tonnes and a free running speed of 13.3 knots.

The deck machinery comprises a Karmoy hawser winch on the bow, spooled with a 250-metre line on each drum. There is also a twin anchor windlass at the bow beside the hawser winch and a Karmoy towing winch provided on aft deck.