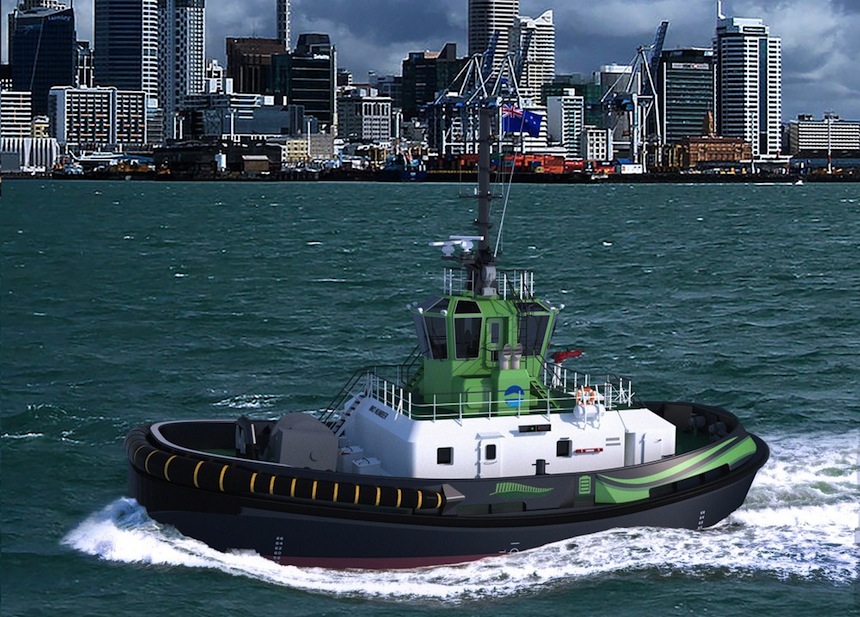 Several pieces of news caught my eye recently, and I suppose they could all be classified, in very general terms, as aspects of sustainability.

First, and most obviously to do with sustainability, is the announcement that the port of Auckland has signed a deal for the delivery of an all-electric 70-tonne bollard pull tug in 2021. It will have a couple of generators for emergencies, but is intended to operate on batteries alone during normal service – a world first. Recharging the batteries, we are told, will take a mere two hours.

This sounds like a significant advance, and Auckland is set to become a global leader. Japan is reported to be developing a 50-tonne bollard pull tug powered by hydrogen and batteries, but it is not due for delivery until at least 2022, so congratulations to New Zealand.

Auckland’s goal is to be a zero-emissions port by 2040 and the new tug, if it works as expected, will be a major step towards meeting that target. In addition, New Zealand gets most of its electricity from thermal or hydro generation, so even recharging the batteries will not lead to an increase in emissions from a nearby power station.

Damen say the tug has been developed specifically to meet the needs of the port, so I cannot tell you if it will be suitable everywhere else. After all, Auckland is not the busiest port in the world.

With four powerful tugs operating there next year, the figures I have seen indicate none of them should be handling more than six or seven jobs per day at most, which leaves plenty of time to recharge the batteries.

Not all ports have that luxury, but many do and I can imagine there might be a spate of orders if the prototype is successful. Future orders, of course, are likely to depend on the price, which is something else I cannot tell you. Let’s hope it is competitive.

Regular readers will know that I have doubts about the green credentials of LNG-powered vessels, especially when slippage is taken into account, so if we can bypass hybrid or dual-fuel tugs and go straight to electric propulsion, I will be delighted.

The next aspect of sustainability is the future supply of manpower for the industry – or personpower if we are to be politically correct. Danish shipping has launched an initiative aimed at increasing the number of women in shipping, and either thirteen or fourteen companies have signed up in the first phase, depending on which press release you believe – a rather poor response rate considering the industry body behind the scheme has 90 members.

According to one press release, if you exclude women working as hotel or retail staff on ferries, only two per cent of sea staff in Denmark are women, while 33 per cent of shore employees are women.

I have trouble with the concept of forcing, bribing or beguiling women to go to sea (or anywhere else, for that matter), for a number of reasons.

We have recently discussed Svitzer’s first all-female tug crew, and Svitzer is a Danish company.

While I can confirm that there are several very effective female tugmasters scattered around the globe, they are there because they want to be, not because somebody set some kind of random quota. There is nothing, so far as I am aware, to stop any woman going to sea if she wants to, although I suspect most women have more sense.

In Hong Kong some friends of mine, including a highly-successful female executive who started her working life as a radio officer, tour the local schools promoting jobs at sea and telling the pupils about the excellent career prospects.

They have been very successful, but despite stressing that girls are welcome and showing the students a very highly-placed female shipping executive, we find that only around five per cent of applicants for shipping courses are female.

Since the scheme started, we have seen Hong Kong women rise to the rank of captain and chief engineer and forge impressive careers, but they remain few in number compared to the men.

Face it, Denmark, it might be that most women simply do not find a career in shipping to be attractive.

“Where are we to find a place where seamanship is still a central part of the job?”

I tried recruiting cadets for a tug company 15 or 20 years ago. Two out of six were female and they were the best of the bunch, but they could not earn full sea time working aboard tugs, so we were forced to let them go to deep-sea companies where they could qualify much more quickly.

For sustainable manning, we should recruit as many young people as possible and train them to the best of our ability. Their race, religion, gender or sexual orientation should be of no concern, as long as they are keen and willing to learn. To paraphrase an old British comedy sketch, some of my best friends are tug people, and only a few of them are transvestites! And it should not matter.

One thing which does matter, and which appears not to be sustainable at the moment is seamanship. A recent report described a Hurtigruten vessel that was hit by a sudden squall during berthing.

The master, with seamanlike use of anchor and engines, brought the ship alongside, “as smoothly as if assisted by tugs”. Some passionate scribe added a postscript that read, “Thank God ships are still runned by professionals, not by shipping industry CEOs and NGO activists.” The grammar may be questionable, but the sentiments are not.

But where are we to find a place where seamanship is still a central part of the job? Apart from Hurtigruten, I suggest that tugs are one of the last places where seamanship is still endemic, and have always maintained that youngsters will learn more seamanship in one week on a tug than in an entire trip on most ocean-going vessels. Yet if they choose to serve on tugs they will normally not get full sea time because tugs seldom go to sea. It’s a funny old life.

As I write this, we are entering the Year of the Rat, and Rat years are said to be characterised by strong vitality (based, apparently, on the rats’ remarkable rate of reproduction). I hope strong vitality is a feature of the year for all of you. Let’s face it, if you made it to the end of this column you are already displaying the right characteristics.