COLUMN | Are women about to make their mark in the towing world? [Tug Times]

Written by Alan Loynd on April 2, 2019. Posted in Tug and Salvage World. 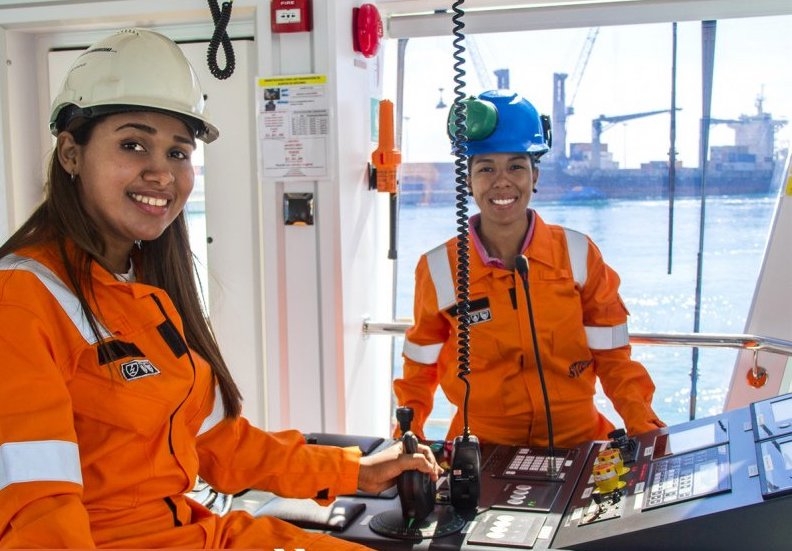 As I write this, female leaders seem to be dominating the news. In Britain, Prime Minister Theresa May continues to plough a lonely and thankless furrow in the rock-covered hillsides of Brexit, whilst half a world away it was a case of, “cometh the hour, cometh the woman”, as the horrific events at the Christchurch mosques unfolded.

Amid all this high drama you might have missed another story about female leaders, when Svitzer announced that it had employed the first all-female tug crew in the Dominican Republic.

On board Svitzer Monte Christi, Captain Maria de los Santos is sailing with Chief Engineer Marysabel Moreno and ratings Paloma Montero, Loreanni Torres and Juana Custodio. Remarkably, they are not the world’s first all-female tug crew, but they are the first to come to my attention and I salute them.

Svitzer has not consigned them to a grotty old tug, either. They are working on a modern 70-tonne-bollard-pull ASD, which is worth a lot of money, so they are obviously more than capable of doing the job.

“Many may think that women do not have the ability to work on a powerful tug boat, but our crew has shown that this type of work is not exclusive to a specific gender. With dedication, it is very possible,” said Ms. Moreno.

Most tugs are not really designed with mixed crews in mind. Shared cabins and bathrooms make it awkward, and there is an overall lack of privacy, which might cause difficulties for both genders unless the crew get to go home at night. Perhaps this is why the women have been placed together. Whatever the reason, Svitzer should be congratulated for taking the initiative.

It is probably dangerous for a man to write about women at sea, because it is all too easy to cause offence, but I did not sail with one until 1980 so it is all quite new to me. And the progress women have made since I first spotted one on a passenger ship less than forty years ago is quite remarkable. If anyone had suggested in 1980 that they would soon be sailing in all ranks and on all types of ship we would probably have summoned the men in white coats to take the deluded fool away.

I try to imagine the difficulties these women have to overcome, but it is not easy for a man. A recent article in a Hong Kong newspaper gave an indication of how backward people can sometimes be. Written by a blonde female Estonian student at Hong Kong’s most prestigious university, it described how she decided to study in a cosmopolitan city with generally warm weather, and found that even after several months her Asian classmates were still giggling and saying, “Can we touch your hair? You are like a Barbie”.

She also found she was the only foreign student in her year, and was asked to participate in all the photo shoots and other activities designed to make the university seem like a cosmopolitan and vibrant seat of international learning. She accused the university of, “creating an illusion”. “It is not diversity,” she said, “it is tokenism.”

Svitzer would not stoop to tokenism, yet the fact remains that out of its total marine workforce of around 4,000 mariners, only 21 are women. This is well below the oft-quoted figure of women making up two per cent of the maritime workforce, so why are the numbers so low?

Jillian Carson-Jackson FNI is Senior Vice President of the Nautical Institute, and writing in a recent edition of Seaways she claims it is hard to imagine a profession that has less gender balance. To overcome this, she advocates initiatives which challenge the unconscious (and conscious) bias that exists in our industry at all levels, and claims that bias makes it harder for women to get hired or be promoted. According to Jillian, “hundreds of years of conditioning has resulted in generation after generation believing that jobs at sea…are for men.”

To overcome this bias, she suggests we need to provide information so women know there is an opportunity to work at sea. “We need pledges, we need policies – but we mostly need action”.

“Most women have more sense”

I hate to disagree, but I have several friends who give up their spare time to go into schools and talk to students of all genders about opportunities at sea. In addition, the local training school has a giant poster on its walls so anyone passing can see how much a graduate can expect to earn as he or she rises through the ranks.

Many of the shipping companies and ship managers in Hong Kong are happy to take female cadets because on average they are better than their male counterparts, yet still we have a massive imbalance between male and female recruits.

It is hard to accept that this is all part of some evil conspiracy to keep women at home where they belong. More likely, in my opinion, is the possibility that young women are conditioned to stay close to home, or cannot imagine how they can combine a seagoing career with becoming a mother later in life. I suspect persuading more women to go to sea will always be an uphill battle.

For those of us in the towage sector it will be even more difficult to attract women. How on earth do you make a rating’s duties on a harbour tug sound attractive. Imagine the sales patter in Hong Kong – you will get to do all the cooking and cleaning, every filthy job that the engineer doesn’t want to do himself, all the chipping and painting, all the greasing, and when connecting a tow you get to stand alone on deck while a homicidal maniac on the ocean-going ship throws a rope weighted with a large lump of iron at your head.

On top of that, you have to share a bathroom with two men who are barely housetrained and on one class of tug there is a large window in the bathroom door – but don’t worry, they promise not to peep.

It seems to me there is no conspiracy, and no bias either conscious or unconscious. We would welcome women on our tugs, even though we know they will be better than us. The problem is, most women have more sense.