Vancouver-based Island Tug and Barge (ITB) is currently working on its most ambitious and innovative project to date. In its Annacis Island Shipyard, located undercover in a pair of huge leased warehouses on the Fraser River, they are building two tugs that will be paired with two of their existing barges. The two boats are built with pins for use in an articulated tug and barge application.

Two existing barges will be modified with the addition of pin ladders and stern extensions for connecting to the new tugs. The Vancouver-based naval architect firm of Robert Allan Ltd did the design work for the tugs and the barge modifications.

Working with this entirely new design, the shipyard team has the hull and superstructure components of the first tug assembled. As they had the steel cut for the first boat they had the second set cut as well and that, with some assembly, is also in the warehouse along with complete sets of Z-drives, deck cranes and other equipment.

The 24.9- by 12.5-metre hull of the first tug dominates one of the warehouses. At the lowest point on the amidships deck the hull has a moulded depth of 3.65 metres. A poop deck aft has flush removal hatches above the two Rolls Royce US105-P9 Z-drives. Forward, a raised forecastle deck contains the port and starboard coupling pins manufactured by the Japanese firm Taisei Engineering Consultants. 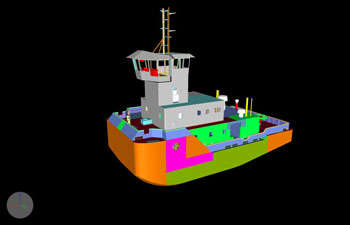 The main deck house, built, like the hull, in steel, continues aft from the forecastle and will contain accommodations. This includes separate captain and mate cabins with heads, two single bunk crew cabins with shared head and two double bunk crew cabins with shared head. A companionway separates the accommodation area from a fiddly over the engine room that is located below in the hull. The clear deck over the fiddly has removable pads for ease in swapping out engines; it will also support a crane and rescue boat.

The engines, set well aft, are a pair of V-12, IMO Tier II certified, Cummins K38-M diesels each generating 634kW continuous at 1,800rpm. The carbon fibre shafts pass through a bulkhead to the port and starboard Z-drive rooms. The Rolls Royce drives, which in March were stored in an adjacent warehouse, have 1,600 m/m propellers in nozzles. Forward of the engine room a workshop and tankage makes good use of the ample space. Forward of that, an electric over hydraulic pump for the coupling pins is located just below the main deck pin rooms.

Also in the adjacent warehouse, the aluminium B-deck is taking shape. It will include a wet room, large mess/lounge area and a well laid out galley. Stairs will lead up to a smaller cabin area for the HVAC and wheelhouse electronics. Above that is a large wheelhouse, with full walk around outer deck, it will provide the helmsman a 12.3-metre height of eye. The aluminium deckhouse and the wheelhouse tower are being fabricated separately for assembly once moved out of the building sheds.

The boats, dedicated ATB vessels with no towing capability, are designed for their owners tank barge routes between Vancouver, Vancouver Island and Puget Sound ports, all of which are in relatively sheltered waters.

ITB Marine Group Chief Fleet Engineer (New Builds) Marinus Goossen expects to have the first boat in the water this coming summer with another month of work alongside prior to sea trials.