FEATURE | Towards a sovereign model of the French shipbuilding industry 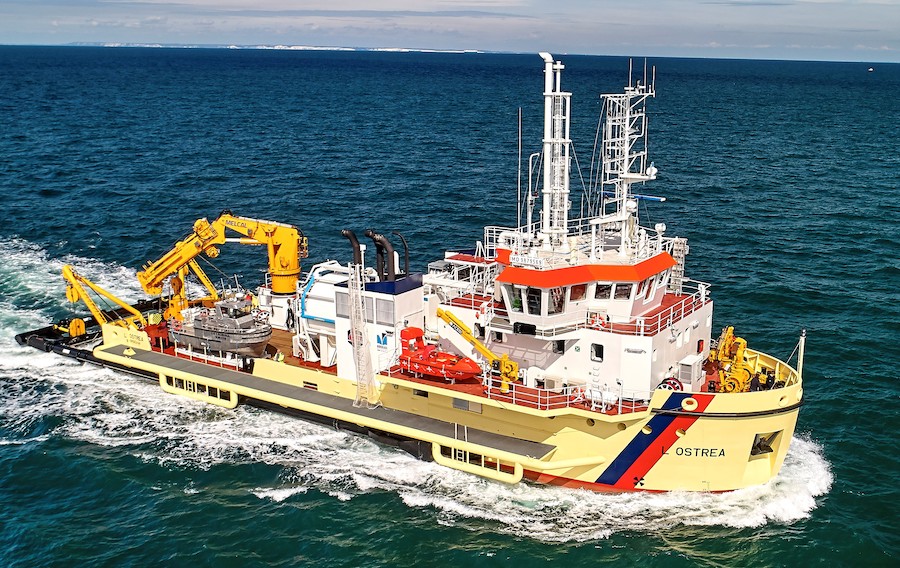 Globally, ship orders in 2020 are at the lowest level of the decade, with cruise ships at the top of the list, segments in which European and French builders are the leaders. Between these large liners and the construction of military vessels, the French civil naval industry specialises in three highly competitive segments: passenger transport, fishing and work vessels, whose orders are flat.

While Chantiers de l’Atlantique delivered the cruise ships Celebrity Apex and MSC Virtuosa, the health crisis has put the shipyards specialising in large passenger vessels virtually to sleep. Barely a dozen ships have been ordered in recent months, including two river ferries being finished at MIM and a ferry at Piriou.

On the fishing side, Covid-19 and the difficulties linked to Brexit have led to a postponement of orders, but the search for versatility and niche activities such as shell fishing is stimulating local demand (71 requests from SMEs in 2020).

French architects and shipyards are working on ships of all sizes and all materials for both new construction and major refit/conversions works. Large units remain rare in French shipyards, with the exception of Piriou, which has just delivered a 67-metre tuna vessel.

Several types of work boats, of various sizes and functions, were ordered or put into service in 2020, including the OSTREA LNG dredge from Socarenam and the first units of an order of 35 rescue boats intended for the National Society for Rescue at Sea, under construction at Couach.

About twenty offshore vessels and fifty coastal rescue boats are scheduled to be delivered by 2030. On the scientific vessel side, IXblue delivered a research vessel for France and OCEA a hydro-oceanographic vessel for the Nigerian Navy. France is also present on the offshore oil and gas market, notably through Piriou, which has registered a new order for a 55-metre aluminium PSV by a Saudi operator.

The French naval construction industry continues to be very successful. OCEA has delivered two new patrol boats to Nigeria, adding to the deliveries of ten patrol vessels and three interceptors. The yard also delivered three patrol boats for French customs and received an order for five 53-metre patrol boats for export in March 2021. Piriou has recorded an order for twenty 24-metre harbour tugs from the French Navy and is currently building several OPVs for Senegal and Argentina. Socarenam has delivered ships for the Belgian Federal Police and for the Polish Navy.

The shipbuilding industry is a long-term industry where several years can elapse between the signing of a contract and the delivery of a vessel. With the increase in order books in recent years, manufacturers have therefore not been greatly affected in terms of turnover, except for the delays and additional costs caused by measure to combat the virus.

On the other hand, order intake fell dramatically in 2020, by 100 per cent for exports, which represents more than 60 per cent of activity.

This is something to worry about, because once existing orders are exhausted, it is the shipbuilding activity that will suffer. Given that it takes several years to train a good welder, employment should not be an adjustment variable. The risk is that of a counter-cyclical crisis, within a few months or a few years. Due to the inability to travel and the postponement of most shows, it was not possible to garner new orders. The coronavirus crisis, beyond making meetings and exchanges with prospects and potential international customers more complex, poses a risk for postponements, or even cancellations, of civilian maritime orders and military programs.

More specifically, the Covid-19 crisis halted the cruise ship order cycle, which had a great impact on European shipyards, while Asian competitors, for their part, once again benefited from significant orders at the end of 2020.

Finally, the pandemic reduced, for a significant period, marine passenger traffic (ferries and cruises) by more than 80 per cent. This has slowed the pace and volume of vessel maintenance in French ship repair yards. The cruise liners represent the largest segment for France in the civil sector. Developments in this sector will have to be closely monitored, even if the shipowners to this day remain confident.

The French maritime sector represented 11.25 billion euros in cumulative turnover in 2020, 45 per cent of which was exported. 6.2 billion euros came from defence and 5.0 billion euros from the commercial side. One of the strengths of the French industry, explained GICAN, is its presence throughout the value chain: shipyards (51 per cent), suppliers of products and equipment (35 per cent), co-contractors (7.0 per cent) , support functions (6.0 per cent), engineering for construction (0.7 per cent) and finally, design offices (0.3 per cent).

46,500 direct jobs, including 20,000 in shipyards and 26,000 for products, services, maritime and defence-specific equipment are recorded. Before the Covid-19 crisis, industry projected the recruitment of 30,000 people over the next ten years, including 10,000 job creations. How this will be affected remains unknown.

Up to 80 per cent of export markets

With a maritime domain of 10.9 million square kilometres, 97 per cent of which is located in the French Overseas Territories, France has a presence in most market sectors. In a globalised market where competition is fierce, it has abandoned the production of low value-added vessels to competitively produce complex vessels.

The excellence of the sector is present from the design stage, with the design offices and the equipment manufacturers, which every day develop innovative solutions in terms of stability, power management, propulsion systems and ecological transition.

The shipbuilding industry also excels in the production phases, especially in the use of new materials. It is an industry that knows very well how to adapt to customer demands and offer individualised solutions. Where today equipment manufacturers sell their solutions on ships around the world, France knows how to do well by offering personalised service.

The main strength of French shipbuilding is the know-how of the sector, innovation and high technology. Shipyards export 80 per cent of their production in the commercial sector and 40 per cent in the military, which means, in an open competitive world, that customers recognise French know-how. The dual capacity of intermediate sites provides additional expertise that benefits both commercial operators and the military.

New opportunities in offshore wind and state action at sea

French shipyards are positioning themselves in the offshore wind sector, the recent development of which in France may offer future opportunities. OCEA and Delavergne, for example, have secured orders for six crewboats and support vessels.

The construction of “Defence Europe” is also an opportunity to find new partners and new outlets in cooperation on intermediate corvette-type segments. Research, strongly encouraged at the European level, is developing on the subject of new energies (within the Waterborne partnership) – the participating sites are looking at alternative energy sources, via fuel cell or hydrogen. The return to favour of wind-driven propulsion allows SMEs/ETIs and startups to show their know-how by entering this segment.

The need for sovereignty at sea, to fight against trafficking and to protect the environment, will also lead to renewing or developing the means of State Action at Sea (AEM) in France and for export in the next ten years. Globally, awareness of the vital importance of controlling maritime areas benefits the industry, with growing demand for dedicated vessels.

Other opportunities exist in the field of intermodal waterways, fishing, maritime safety, high-tech equipment and cyber security, all of which are markets in which the industry is actively working.

Greening of fleets and new technologies

French industry is increasingly interested in research around “green” and smart ships, equipped with sensors or robotics, the challenges being multiple when it comes to working for the decarbonisation of maritime transport by 2050.

The exploitation of the deep seabed, like the development of the oceans, is also a major trend with which the maritime industry must position itself with its expertise and know-how.

On the subject of employment, the sector is committed to safeguarding and adapting skills, improving the image of industry and increasing female participation, with a strong desire to make industrial jobs attractive. The work is long, and the sector continues to rely, for the moment, on temporary workers from central and eastern Europe.

The sector is also committed to national economic solidarity within the framework of the Maritime Fontenoy, led by the Minister of the Sea Annick Girardin, which aims to revitalise and improve competitiveness of French industry. The recovery plan should also make it possible to support investment in production facilities and support the industrial development of certain construction and repair sites.

French shipbuilding stands out from its competitors by its excellence in naval architecture, design/construction cooperation, its very export-oriented activity and even the unfortunately too-weak links between shipowners and French shipyards.

Among the strengths, the sector benefits from a very good French naval architecture school, geared more towards performance – whether at the level of the structure, systems or integration – driven by the three major French standard bearers of military ships, cruise liners, and ocean racing.

Secondly, the ships built by French shipyards are overwhelmingly built on French designs – whether they are internal to the shipyards or produced by external French partner design offices. This differs from competitors from Spain, Turkey and Asia, which build a significant portion of their ships from foreign, especially Norwegian, designs.

Finally, the yards have shown agility by widely renewing their offerings and have been able to vary their production. This is the case, for example, with sites which historically practically only focused on fishing and which have now become multi-sectoral.

Revitalise French industry and prioritise it at home

Nevertheless, the sector suffers from strong dependence abroad and less innovation in certain segments such as propulsion (apart from sailing and nuclear).

French activity is also very export-oriented: on the military side, thanks in particular to the experience of the French Navy; and exclusively so in the case of large liners. On the other hand, there is little export of commercial vessels of less than 100 metres, and the level of importation is very high, and growing, via private orders and sometimes even government acquisition.

France has modern and efficient industrial and port infrastructure throughout its home and overseas territories and an exceptional openness to the world.

Based on its many strengths, the future of the French maritime industry rests on an ambitious maritime policy that truly takes into account the industrial aspects and their social, fiscal and economic benefits.

Click here to see all vessel reviews, features, and new stories from this month’s France Week.

Stéphanie Roos-Faujour is the founder of French communication and marketing consulting agency Sea to Sea, specialising in the maritime world.