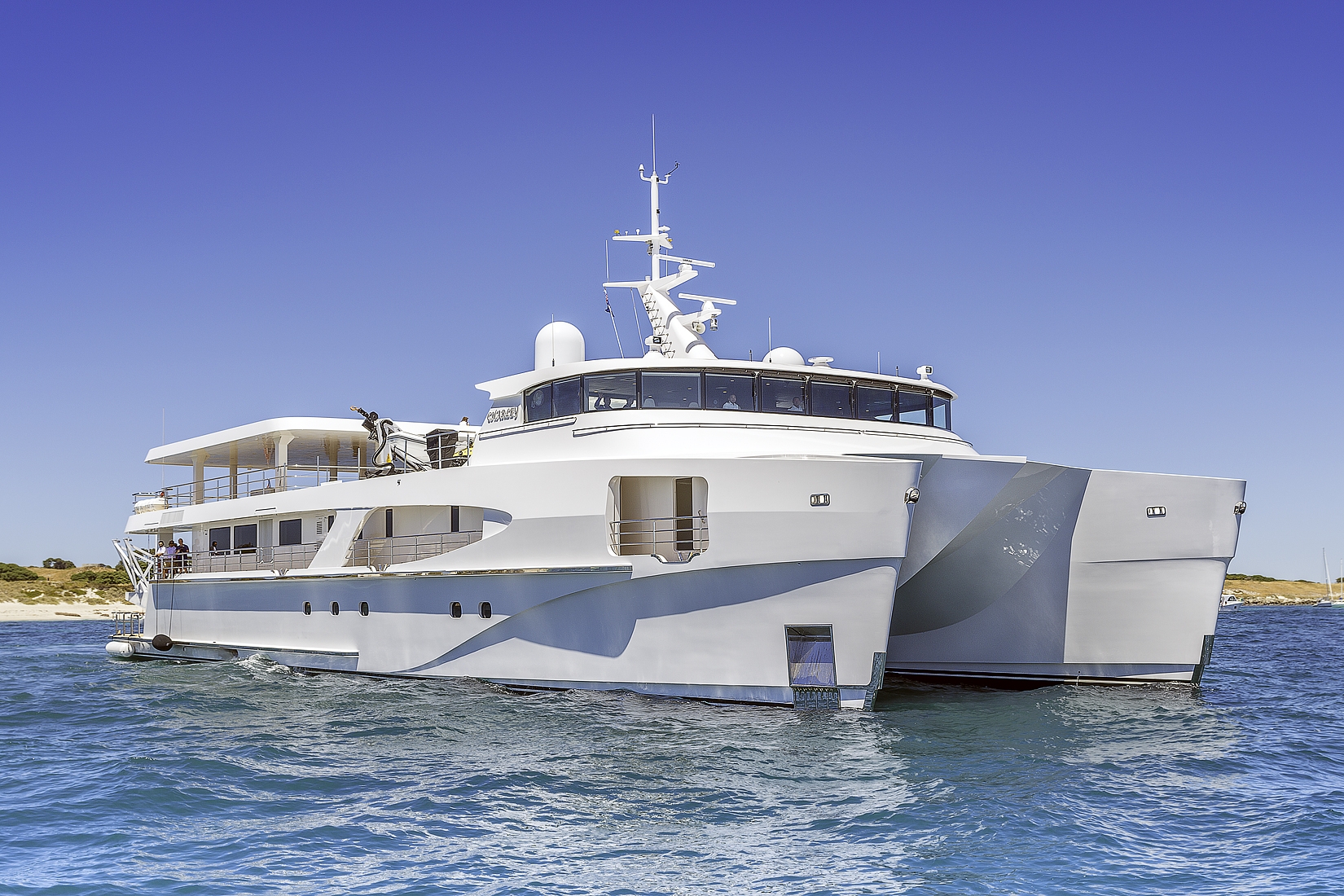 A West Australian builder has recently launched and delivered the 46-metre composite catamaran shadow vessel Charley, the largest composite resin infused vessel ever to be built in Australia.

Shadow vessels are a new breed of work boats. They are designed to blend in amongst super yachts with their smooth lines and lots of polished white paint and gleaming chromed steel, however their purpose is to reduce crew numbers on the main yacht, allowing room for more guests, whilst also offloading other tasks that interfere with the enjoyment of being on a motor yacht.

The shadow vessels typically carry all the water toys and additional tenders that otherwise wouldn’t fit on the mothership as well providing a vessel to run to ports for resupply of stores, removing a time consuming diversion that the yacht would otherwise have had to make. 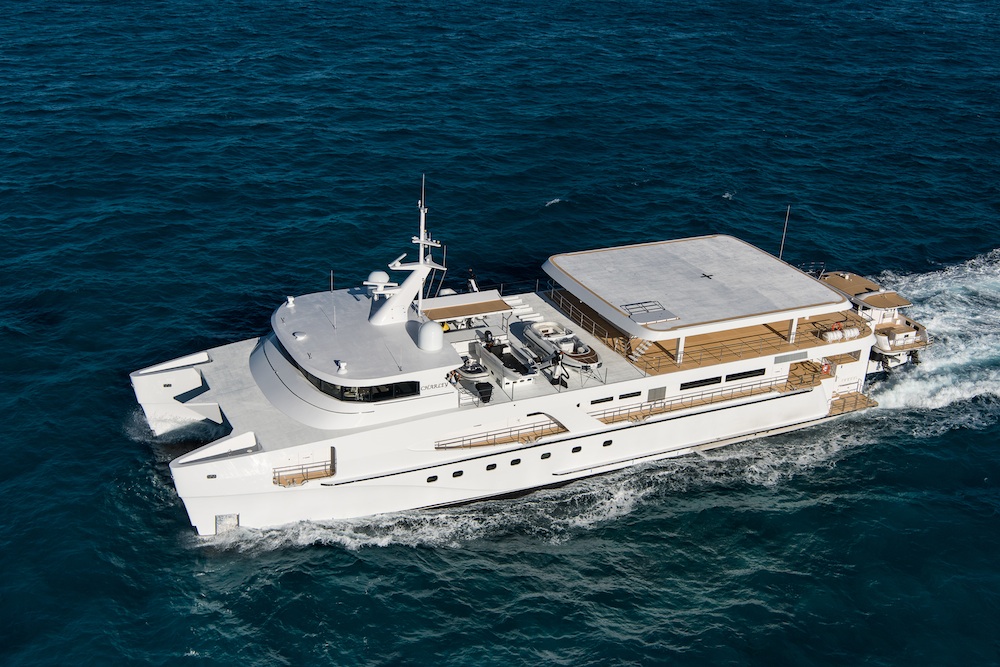 With naval architecture by LOMOcean Design of New Zealand, the Charley project started in mid-to-late-2013 with client briefings and the development of initial concept drawings.

The boat was to shadow a much larger trimaran superyacht being built at the same yard. Carrying tenders, water sports equipment and additional crew she would also be able to serve as a functional, practical, live-aboard sport-fishing and diving vessel in her own right. 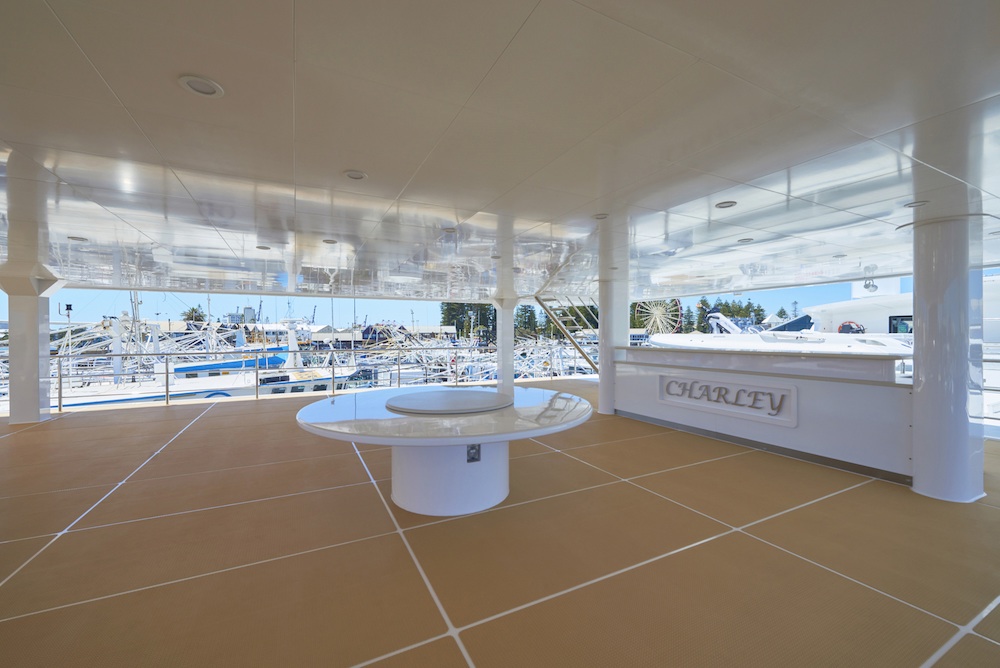 In her shadow boat role, Charley was to be capable of swift, efficient passage-making in the same sea conditions as the mothership, a challenging problem that had manifested itself in the owner’s previous yachting experiences.

The final form of the boat remains very faithful to the owner’s original sketches, characterised by the “cab forward” wheelhouse, an array of small tenders and water toys amidships on the bridge deck level and a huge outdoors area aft shaded by a large solid overhead canopy for relaxing and socialising.

Although not formally certified as a helipad, the canopy was engineered to permit a touch-and-go landing of an Airbus EC130 helicopter for emergency purposes. 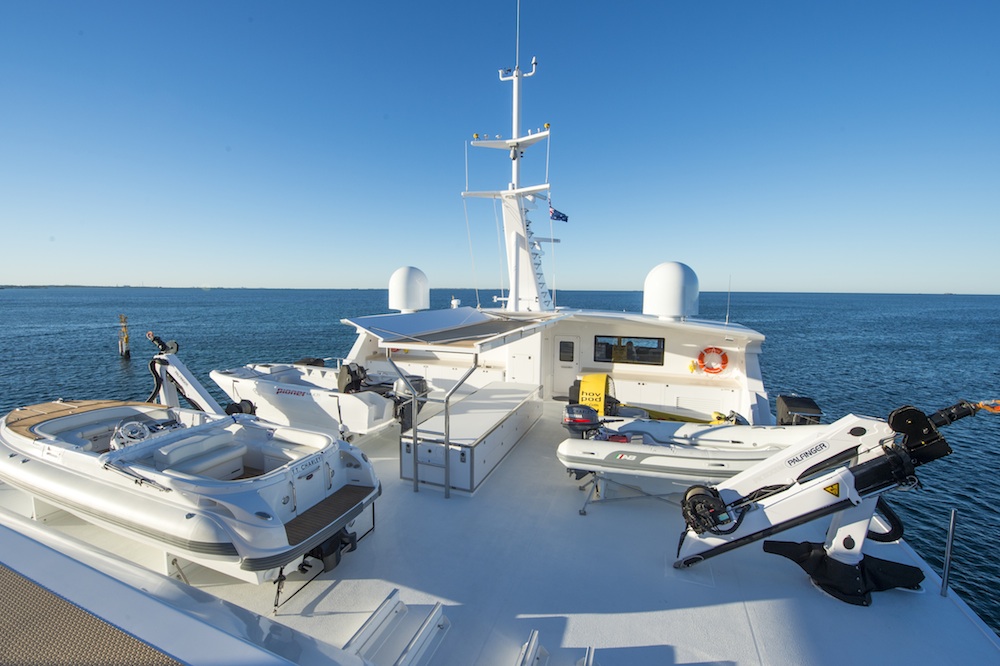 The toys, including a seven-metre Castoldijet tender, 6.15-metre Pioneer multi-hull landing craft, 4.3-metre Navigo RIB, 2.85-metre Williams turbo jet RIB, 3.6-metre Hov Pod hovercraft, and four Yamaha wave runners, are launched by a pair of Palfinger knuckle-boom cranes which feature a white paint finish to fit in with the styling of the vessel.

The cranes are equipped with wire-line winches for hoisting the loads between water level and the bridge deck. For assistance with locating wrecks to dive on a Kongsberg EM2040C multibeam sonar has been equipped and will undoubtedly prove useful in anchoring as well. 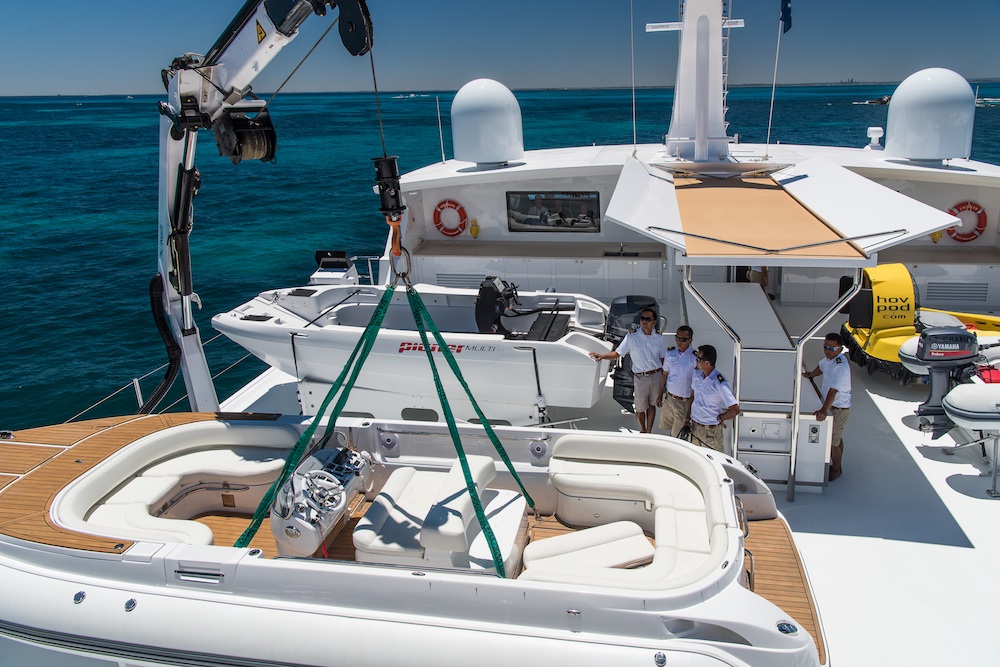 Her main tender, the 12-metre Biit, is launched from a specially engineered launch and retrieval platform positioned at the stern of the vessel. She was also designed by LOMOcean and is intended as a fast and safe means of deploying sport divers. 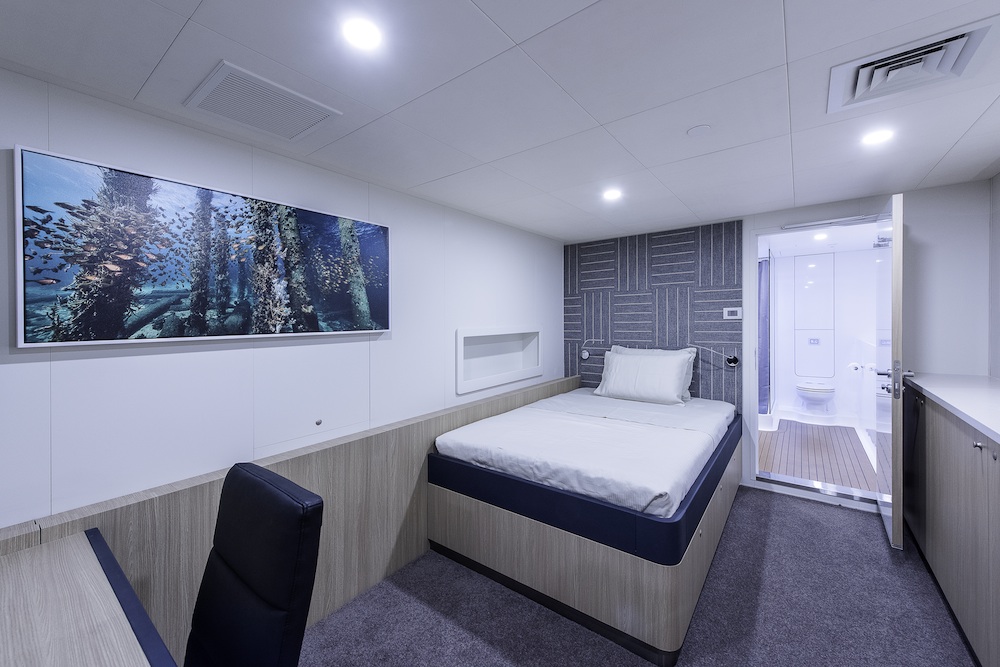 The lower decks, including significant portions of the catamaran demi-hulls, are dedicated to owner, guest and crew accommodation. As well as housing the considerable machinery, tankage and plant equipment the area is also home to the decompression chamber. 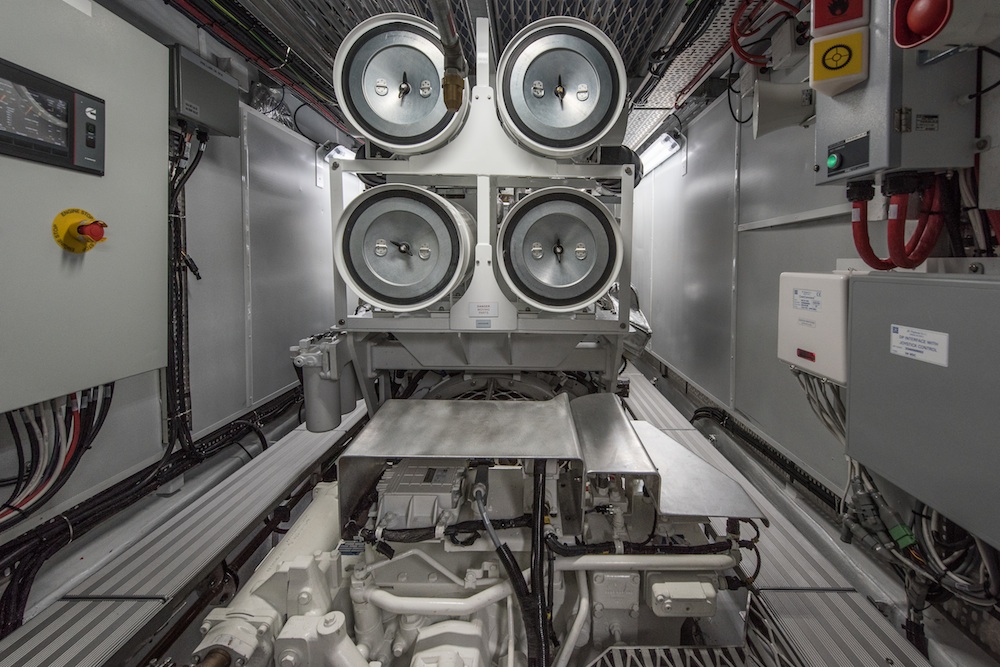 Her propulsion system consists of two Cummins QSK60 diesels, each producing 2,013kW at 1,900rpm which together give Charley a top speed of 20 knots.

The top speed was predicted by data sourced from the towing tank at AMC in Tasmania and confirmed by sea trials and during Charley‘s maiden voyage from Fremantle to her home port in Singapore. On the voyage, which went via Bali, she cruised at 16 knots with a heavy ship sprint of 20 knots achieved easily.

The underwater forms are pure displacement hulls, with a quasi-bulbous bow morphing aft to semi-circular midships sections and again to a full faired canoe stern supporting the propellers slung under a square sectioned transom housing the rudders. 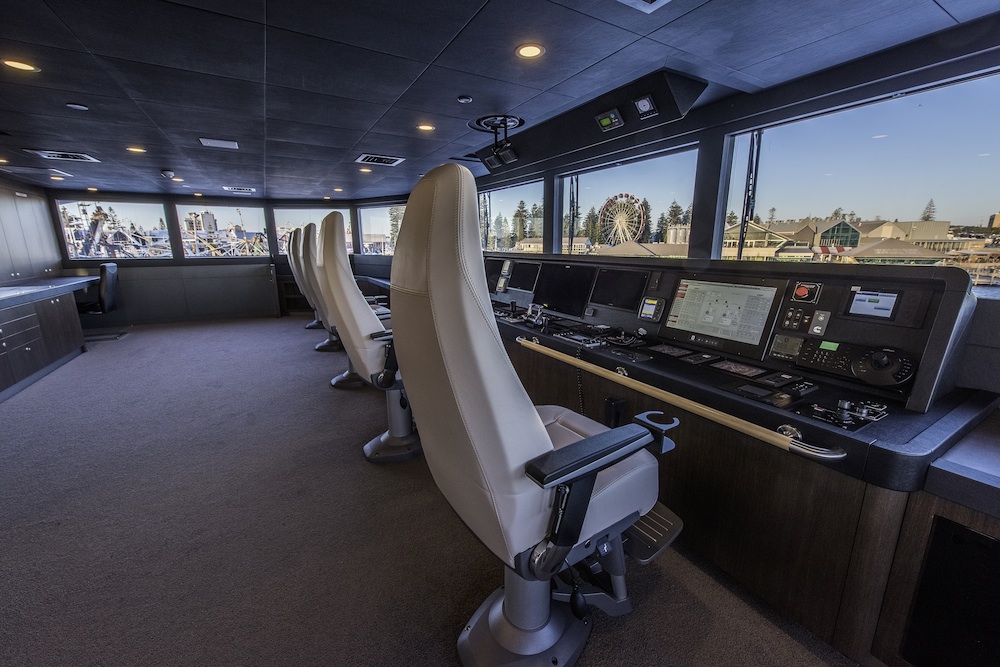 The use of composite materials for construction was a decision made early in the project, making Charley one of the largest all composite multi-hulls in the world.

Although accepted as a more expensive build medium, the benefits of reduced framing intrusion on interior volumes, the insulation inherent in the foam sandwich construction and the reduced maintenance associated with the inert nature of the materials were considered the main benefits.