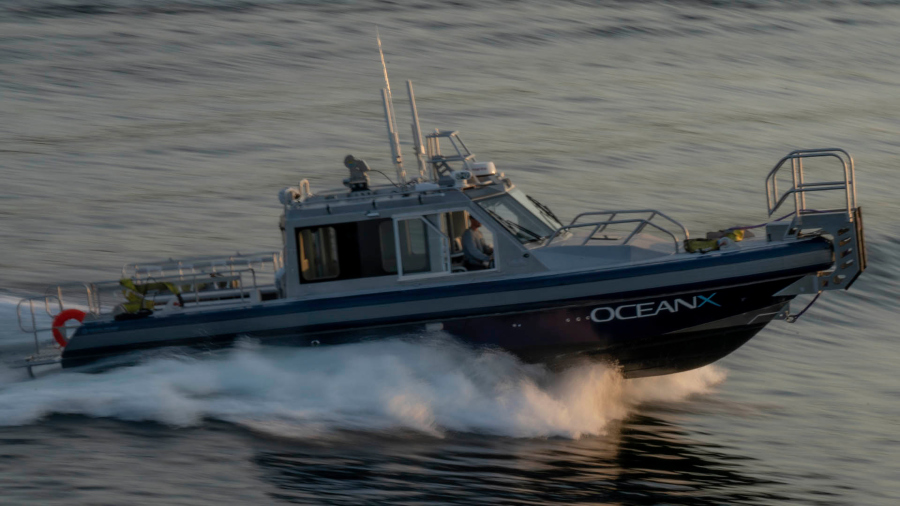 The custom-designed, welded aluminium monohull pilothouse craft will be carried aboard OceanXplorer, an offshore inspection, maintenance, and repair (IMR) vessel that has been converted into an advanced floating research, exploration, and media production platform complete with state-of-the-art scientific equipment and video recording facilities.

The new boat utilises a standard Metal Shark tender design with an LOA of 11.5 metres, a beam of 3.3 metres, and a hull that the builder claims is rated to last over 30 years. The wide, non-skid walkways come with grab handles for added safety for the crew as they move around and low-level LED lighting to aid in nighttime operations.

A urethane-sheathed, close-cell foam collar provides ample impact protection while port and starboard dive recesses and a full-beam swim platform facilitate easy access to and from the water.

Metal Shark’s in-house team of engineers worked in close collaboration with OceanX’s own designers to guarantee that the new tender would possess a high level of operational versatility just like the larger vessel it is intended to support. This then meant the vessel would be fitted with an array of features not found on the baseline Metal Shark 11.5- by 3.3-metre tender design.

The tender’s customised aft deck features a removable hydraulic A-frame for lifting, removable dive benches and an awning for crew protection, dual flip-up convertible bench seats, an aft helm station for manoeuvring the vessel in close quarters, and a removable filming tower. The latter feature makes the boat capable of providing direct support for the media production activities carried out by OceanXplorer’s crew.

A dive refill station with two 50-litre cylinders was added below deck, along with crew accommodations including a climate-controlled cabin with air conditioning and heat, a head with fresh water shower and tankless water heater, a water maker filtration system, and a custom berth with IT rack beneath.

As is the case with the standard Metal Shark 11.5- by 3.3-metre tender, the newbuild’s spacious pilothouse provides all-weather comfort and security – important attributes given that the mothership on which it is to be deployed will often sail to remote areas of the world’s oceans where the operating conditions could pose significant challenges to even the most seasoned sailors.

Powered by twin Cummins QSB 6.7 410kW diesel inboard engines mated to a pair of HamiltonJet HJ 292 waterjets with Blue Arrow controls, the tender is capable of pinpoint manoeuvrability at all speeds. Further, the choice of diesel power allows the tender to refuel off the mothership safely while eliminating the hazards of storing and transferring the petrol typically required for outboard engines.

A positioning system supplied by HamiltonJet assists with station-keeping and also offers a “virtual anchor” mode by utilising a single GPS mooring point for hands-free standby operations. The positioning system also allows low-speed precision manoeuvring of the vessel with the use of only one hand.

A gyroscopic stabilisation system developed by Seakeeper has also been added to reduce the vessel’s pitch and roll by as much as 95 per cent. This enables the vessel to maintain a level attitude for as long as possible for activities such as filming and transfers of personnel and light cargo to and from the mothership.

Single-point and four-point lift options facilitate vessel launch and retrieval from aboard the mothership, eliminating dependence on straps and spreader bars while improving safety for the crew. A removable bow push knee adds an extra element of utility while allowing for safe boarding from the bow.