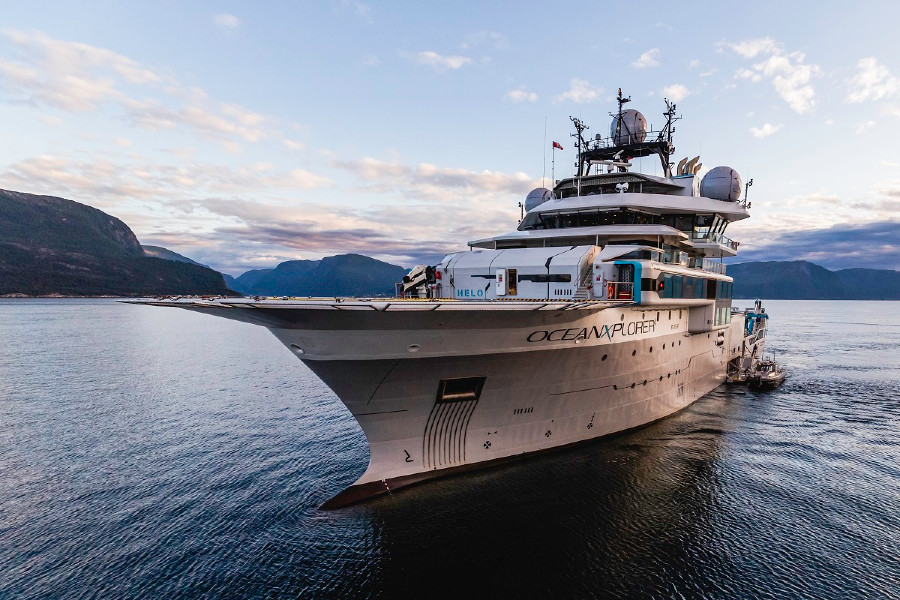 US-based marine research initiative OceanX recently introduced a rebuilt vessel into service for use in exploring the world’s oceans with the help of a comprehensive array of scientific tools and media production equipment.

Originally built as an offshore inspection, maintenance, and repair (IMR) vessel in 2010, the Skipsteknisk-designed Volstad Surveyor has been renamed OceanXplorer following the completion of an extensive rebuild programme at Damen Shiprepair Rotterdam to enable it to operate in the new roles of ocean exploration, research, and media production.

The team that had carried out the conversion work claims the vessel’s new capability is unprecedented due to its possessing the most advanced exploration, research, and media production equipment ever to be incorporated in a single mobile platform. 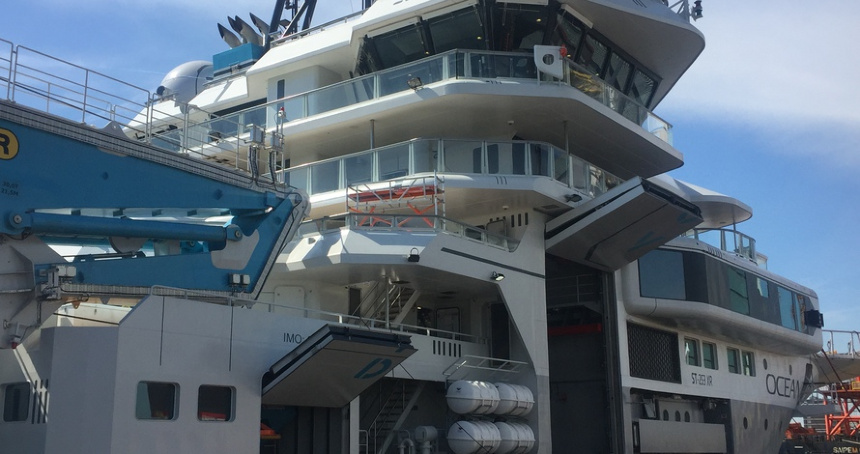 Skipsteknisk collaborated with Steve Gresham Yacht Design to ensure OceanXplorer would be adequately equipped for an entirely new set of missions while still possessing the same durability that had made it an invaluable asset in supporting offshore oil and gas operations under its previous owners.

The refit had required that everything on the vessel from the main deck upwards be replaced with a larger accommodation block that would also include laboratories and workshops, resulting in an increased beam. The interior accommodations have been upgraded as well with inputs from both Steve Gresham and famed designer Christina Fallah.

The refit had also encompassed removal and refurbishment of the azipull and bow thrusters as well as blasting and coating of tanks.

OceanXplorer is expected to be utilised in a diverse range of activities including scientific research of life in the oceans, surveys of unexplored ecosystems, seabed mapping, and production of digital media content based on the results of its research and discoveries. As such, the vessel has been fitted with sonar arrays, wet and dry laboratories, a dive centre, acoustic sonars, and CTD sampling systems.

The sonar array features two multi-beam systems capable of mapping to 3,000 metres and 8,000 metres deep, respectively. This cutting-edge acoustic array enables high-resolution mapping and exploration of the seabed. Working along other sensors – including those that measure currents, salinity, and nutrients across the water column and a creature-tracking fish finder – these technologies provide scientists with all the data they need to deeply understand an entire ocean ecosystem.

If the survey finds an anomalistic feature, for example a possible active hydrothermal vent field, the ship’s CTD device can be used to “sniff” out the chemical signature that would triangulate the vent site location and provide
details on its activity. Then, depending on the depth, an unmanned vehicle can be deployed to the site to show via live camera feed what the vent looks like. 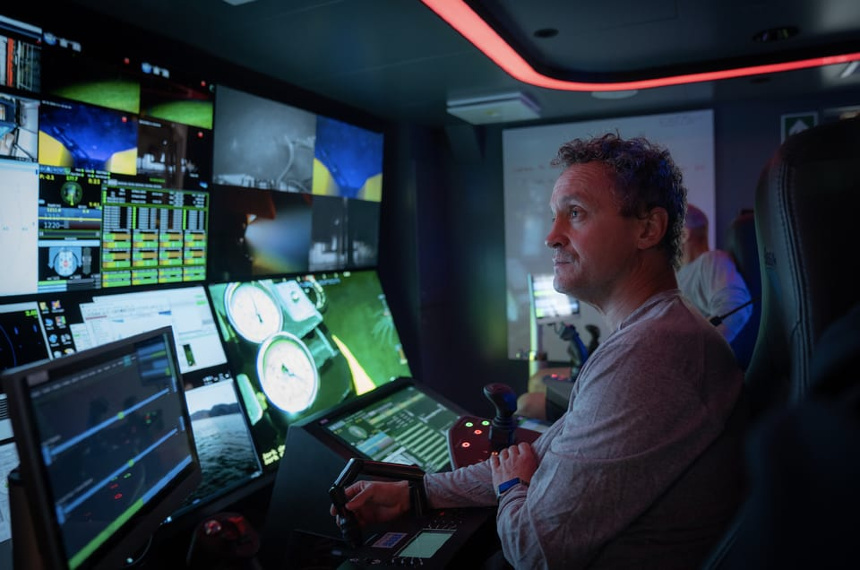 All of the data collected by the onboard sensors are transmitted to an onboard mission control centre which functions as the vessel’s “central nervous system.” Outputs from the data management system can also be input into specific software for more in-depth data analysis, such as inspection of a bathymetric feature or 3D visualisation of a hydrothermal vent.

The ship’s four onboard laboratories were designed to be similarly equipped and laid out as those found at many leading research institutions around the world. Their capabilities include microscopy, aquarium tanks, eDNA analysis, genetic sequencing, biofluorescent imaging, and visualisation of samples from the ship’s various sensors.

The laboratories also feature ceiling-mounted tracks and power supplies to support production lighting and other media equipment without cords, tripods, and other production tools getting in the way of the scientists as they work.

The vessel also boasts a fully equipped media studio that had been developed in partnership with renowned American filmmaker James Cameron and production designer N.C. Page Buckner. This facility would allow production crews to collate research findings for digital distribution to audiences worldwide, and the onboard production equipment means findings can be live-streamed at the exact moment of discovery. 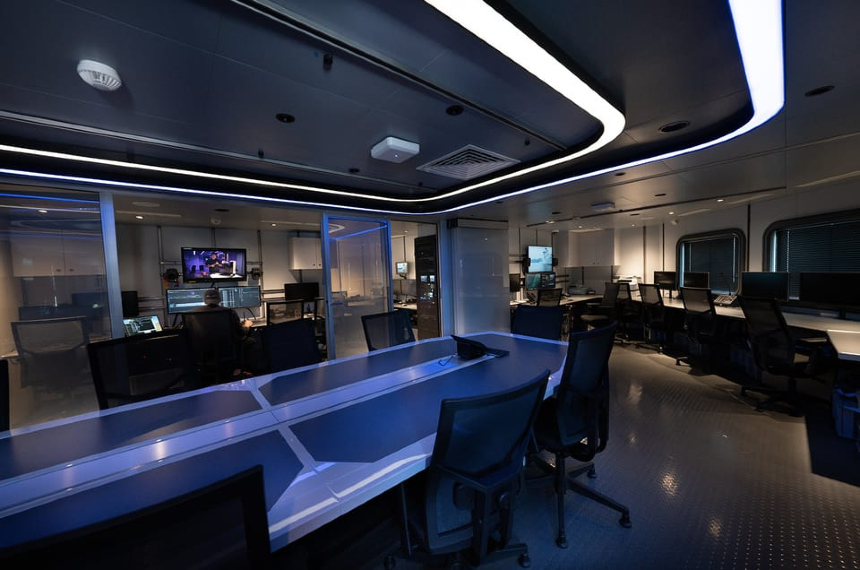 Mixed-reality data visualisation and real-time editing allows the OceanX media team to deliver short-form, episodic, and live content while at sea. The content they work with comes from cutting-edge low-light and high-resolution cameras carried in custom housings, including the only housing in the world capable of shooting 8k resolution at nearly 6,100 metres below the sea surface.

OceanXplorer has also been extensively modified to function as a mothership for both manned and unmanned vessels that will augment its own research and exploration capabilities. 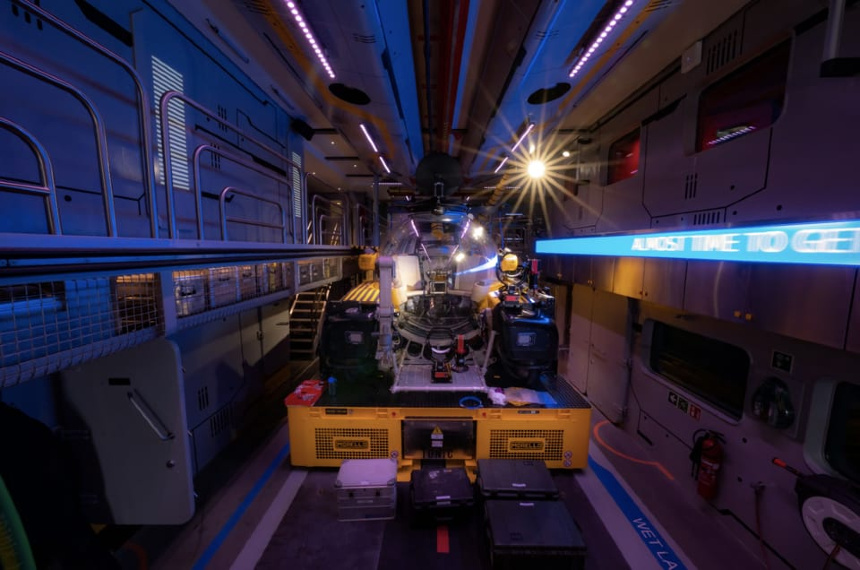 The vessel has been fitted with a hangar that could house, launch, and recover two Triton manned submersibles. The submersibles, named Nadir and Neptune, are capable of diving to 1,000 metres and operating as mobile marine studios with HD cameras.

There is also a smaller hangar for an autonomous underwater vehicle (AUV) and a remotely operated vehicle (ROV), both with a rated depth of 6,000 metres. The unmanned vehicles will be used for surveys, seabed profiling, collecting samples, and obtaining underwater video footage of significant finds such as natural events and archaeological discoveries.

The bow features a flight deck complete with hangar and refueling facilities. This will be used to support a helicopter, which the crew would deploy for long-range search missions and for airborne filming activities.

As is the case with the onboard exploration sensors, the data gathered by these other vehicles will also be transmitted to OceanXplorer’s mission control centre for real-time review and distribution.

OceanXplorer has already embarked on its maiden voyage following its refit, a global ocean exploration cruise just off Saudi Arabia for an upcoming National Geographic series. 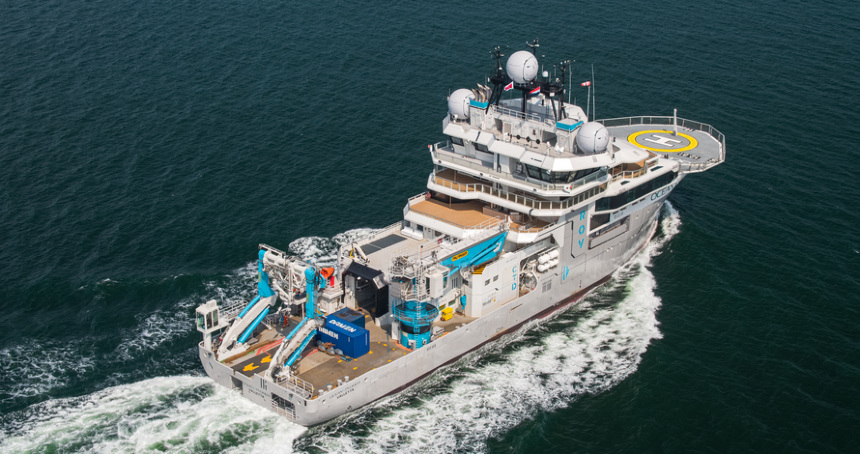