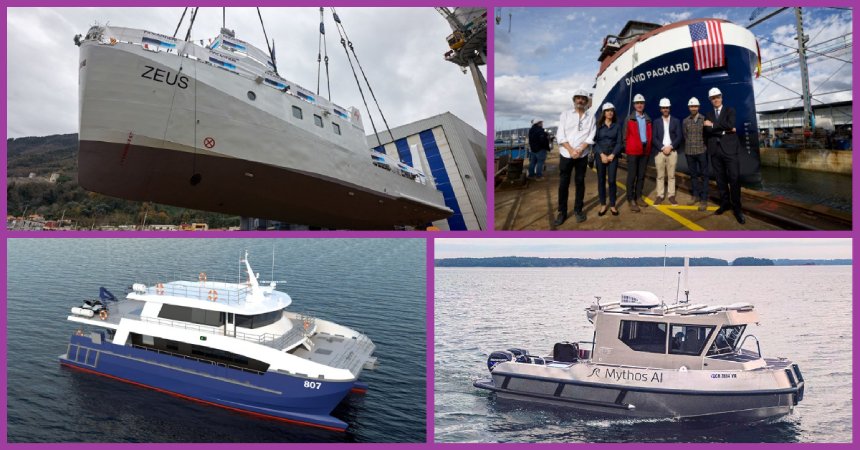 A Florida-based autonomous systems company acquires a new survey boat while construction is nearly completed on a hydrogen-fuelled research vessel in Italy. Work is underway on a coastal vessel for a California science institute and a research and patrol catamaran for an agency of the Thai government.

The aluminium-hull, outboard-driven ArchieOne was built by Safe Boats under an exclusive license agreement with Stormer Marine of the Netherlands. It is specifically designed for the integration of Mythos AI’s self-driving and autonomous hydrographic survey control system.

A second boat from the same series is nearing completion while future builds are scheduled for 2023 and beyond.

Classification society RINA has granted class approval for a hybrid-powered research vessel that is also capable of running on hydrogen fuel.

Named Zeus, the 25-metre-long vessel will operate primarily as a floating laboratory for the study of fuel cells. It is equipped with a hybrid propulsion system consisting of two diesel generators and two electric motors.

In addition, there is a 144kW fuel cell system powered by about 50 kilograms of hydrogen contained in metal hydride cylinders as well as a lithium battery system. This configuration will allow the ship to sail for approximately eight hours at a speed of 7.5 knots in zero-emission mode using only the electricity supplied by the fuel cells, or to sail for approximately another four hours at a speed of four knots in zero-noise mode using batteries.

The vessel is being developed under the TecBIA project, which also includes shipbuilder Fincantieri, Isotta Fraschini Motori, Cetena, Seastema, and the Universities of Genoa, Palermo, and Naples.

Work on David Packard will now entail outfitting of the interior including incorporation of the onboard internal science and engineering systems.

Once completed, David Packard will have a length of 164 feet (50 metres),a beam of 42 feet (12.8 metres), a draught of 12 feet (3.7 metres), and capacity for a crew of 12 and a science crew of 18. Onboard space will be available for remotely operated vehicles (ROVs) and autonomous underwater vehicles (AUVs).

Design work on the vessel was provided by naval architecture firm Glosten.

Thailand’s Department of Marine and Coastal Resources (DMCR) has awarded local shipyard Seacrest Marine a contract for the construction of a new catamaran research vessel.

The aluminium-hulled catamaran will have space for 12 crewmembers and 16 other personnel. Accommodations will include six cabins, five toilets, a mess, a galley, offices, and a stores area.

The vessel will also perform the secondary role of coastal patrols and monitoring of fisheries and marine resources.