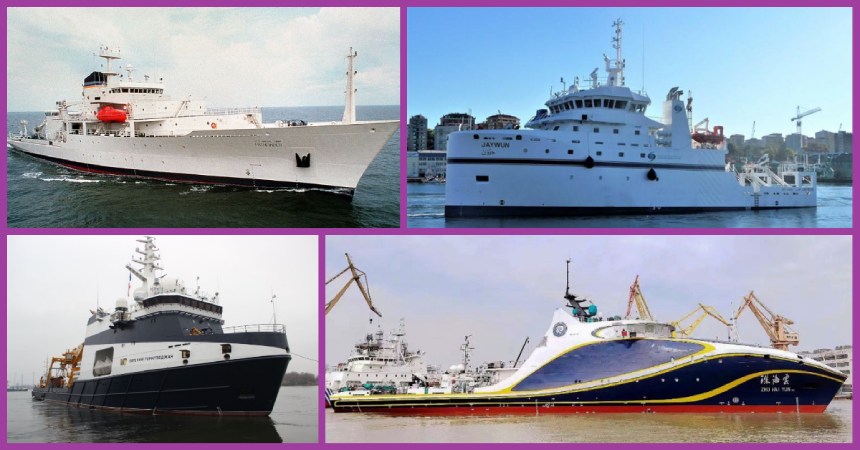 A Chinese science institute has taken delivery of a large mothership for unmanned craft that is itself capable of autonomous sailings while a UAE operator welcomes a newbuild to its Persian Gulf fisheries survey fleet. Builder’s trials were recently completed for a Russian research and monitoring ship that will also perform rescues at sea. Finally, the US Navy selects a famed marine science expert as the namesake of a future oceanographic vessel.

Classed by China Classification Society (CCS), Zhu Hai Yun (“Zhuhai Cloud”) will be operated by the Southern Ocean Science and Engineering Guangdong Laboratory (Zhuhai). Its primary role is to serve as a mothership for smaller unmanned air, surface, and undersea vehicles.

The vessel has an LOA of 88 metres, a moulded beam of 14 metres, a design draught of 3.7 metres, and a design speed of 13 knots courtesy of a diesel-electric propulsion system.

Named Jaywun after a local variety of pearl, the vessel was built by Spain’s Freire Shipyard with support by Abu Dhabi Shipbuilding.

The newbuild is designed to carry out advanced oceanographic and fisheries research work in both deep and shallow waters. On board are accommodations for 18 crewmembers and 11 scientists as well as facilities including multiple laboratories, a diving team preparation room, and a remotely operated vehicle (ROV) launch and recovery area.

Jaywun’s main area of operations will encompass the Persian Gulf.

Evgeny Gorigledzhan is named after a famed Russian engineer who specialised in the design of nuclear-powered submarines. Design work was provided by engineering firm Almaz.

The vessel will be used for oceanographic surveys, marine environmental monitoring, and secondary duties such as search and rescue.

US Secretary of the Navy Carlos Del Toro recently confirmed that a future Pathfinder-class oceanographic survey ship will be named USNS Robert Ballard.

The vessel will honor Dr Robert Ballard, a retired US Navy officer and former director of the Center for Ocean Exploration. A tenured professor of oceanography at the University of Rhode Island’s Graduate School of Oceanography, he is known as a discoverer of the final resting place of ill-fated passenger liner Titanic.

The navy said the name selection follows the tradition of naming survey ships after explorers, oceanographers, and distinguished marine surveyors.

The future Robert Ballard will be operated by the Military Sealift Command. It will be the eighth vessel in the Pathfinder-class.