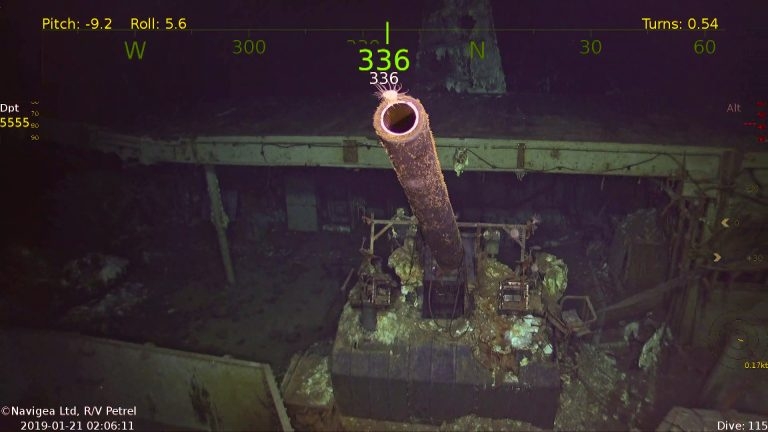 Petrel, the research vessel owned by the estate of the late American business magnate and philanthropist Paul Allen, has found the wreck of a US Navy aircraft carrier that fought in and was sunk during World War II.

The Yorktown-class carrier USS Hornet was found by Petrel some 5,330 metres below the surface, resting on the floor of the South Pacific Ocean, in late January 2019.

The 10-person expedition team on Petrel were able to locate Hornet’s position by piecing together data from national and naval archives that included official deck logs and action reports from other ships engaged in the October 1942 Battle of the Santa Cruz Islands during which the carrier was sunk along with 140 of its embarked crew of nearly 2,200.

Positions and sightings from nine other US warships in the area were plotted on a chart to generate the starting point for the search grid.

In the case of Hornet, it was discovered on the first dive mission of Petrel’s autonomous underwater vehicle (AUV) and confirmed by video footage from the remotely operated vehicle (ROV), both of which are rated to dive down to 6,000 metres.

Hornet played a pivotal role in some of the most important moments of World War II naval history, including the Doolittle Raid and the Battle of Midway.

From the deck of Hornet on April 18, 1942, a squadron of US Army Air Forces B-25 bombers led by Lieutenant Colonel (later General) James “Jimmy” Doolittle flew the first aerial attack on Japanese homeland targets, including Tokyo.

The carrier was later sunk on October 26, 1942 during the Battle of the Santa Cruz Islands after a relentless coordinated attack by Japanese dive bombers and torpedo planes, and eventually, torpedoes from two Japanese destroyers.