If my researchers’ numbers are correct, this year will be a stellar one for the research vessel community. On the face of IMO data, 38 seagoing research vessels will be completed with a total of nearly 118,000 gross tonnes. Both these numbers are the largest for the last 20 years.

While that claim is based on the existing fleet data, which may under estimate shipbuilding production due to losses and conversions, it seems highly probable that they are outright records. The next best figures are 29 vessels in 2012 and around 109,000 gross tonnes in 2010. 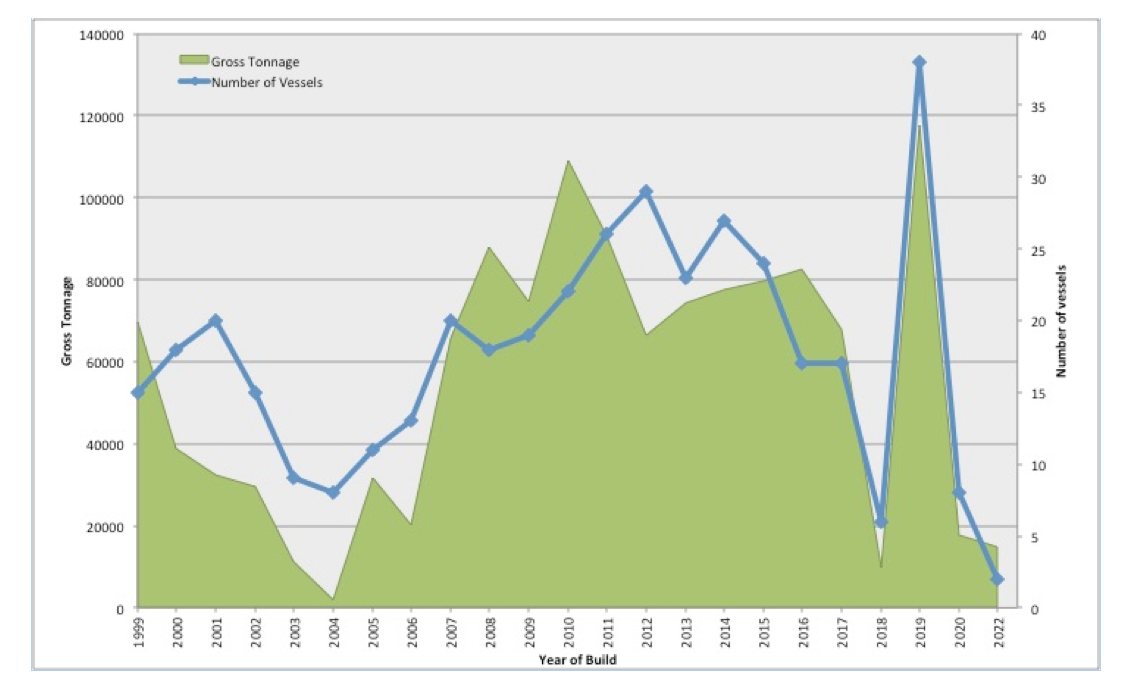 Leading the charge for 2019 in terms of tonnage are the flag states of China, Australia, India, the Falkland Islands, and Cyprus; each with more than 7,000 gross tonnes of newbuild on the way. In terms of vessel numbers, the top of the table is China (12 vessels); the Netherlands (five vessels); and India and Taiwan (three vessels each).

Now, of course, there are lies, damn lies, and statistics so it does pay to look a bit beyond the summary data here.

For example, six of the Chinese-flagged vessels are for “unknown” owners. They account for 6,795 of the flag’s world-leading 36,509 gross tonnes. It could be simply that the owners’ details have not yet been formally detailed, or possibly that they are being built on speculation. Notably five are fisheries research vessels that are listed as Zhejiang SB – Fenghua ZJ5001-5005 which would seemingly be shipbuilder and yard number references. And if it is the Zhejiang Shipbuilding that went bankrupt a couple of years ago, one would doubt that these will ever be more than IMO numbers.

The other “unknown” Chinese vessel is certainly more certain: as the Baird Maritime website has reported, Wuchang Shipbuilding Industrial Group launched Shen Hai Yi Hao (“Deep Sea Number 1”), a new mothership for manned submersibles, in December 2018. It will be owner/operated by the China Ocean Mineral Resources Research and Development Association.

Also listed with “unknown” owners for 2019 are:

So while some projects probably won’t actually be seen this year, there are most definitely some very significant (and real) ones among them. Let me guess, though. You are wondering about the Falkland Islands flag. Well the mystery of that is that it is actually the new polar research ship for Britain, the RRS Sir David Attenborough (aka Boaty McBoatface).

At roughly 15,000 gross tonnes you would be forgiven for thinking Sir David Attenborough will be the largest new research vessel to come on stream this year but it is actually in second place. The usurpers are the Aussies with their new icrebreaker/research/supply ship Nuyina tipping the scales* at just over 20,000 gross tonnes. Construction of that is expected to complete by year’s end with delivery from Europe to down under in 2020.

Other heavyweights* are China’s new polar ship, Xue Long 2, at 12,366 gross tonnes and an 8,863 gross tonner for the Indian Government being built at Cochin Shipyard. This latter project may well be the so-called “DRDO Technology Demonstration Vessel” which is said to be used for missile tracking.

Tempering the excitement for this year, though, must be that according to the same data 2018 was the worst year in the past 20 in terms of the number of new vessels, and second worst in tonnage terms. Only eight vessels were built:

For those interested in fleet stats, and this is solely based on vessels built in the last 20 years, of all the flags you’ll see flying on research vessels you’ll see the Chinese one the most with Bahamas, Cyprus, and Panama obviously well-liked by the commercial research/survey vessel community.

Of flags with five or more vessels, the largest average size award goes to the Norwegian international Register (NIS) with 15 vessels averaging out at just over 8,000 gross tonnes. Of the sizeable fleets, the oldest and youngest belong to the United Kingdom (11 vessels averaging 14.7 years old) and Taiwan (six vessels averaging less than three years old).

*Yes, I realise gross tonnes is not a weight measurement. No hate mail thanks.