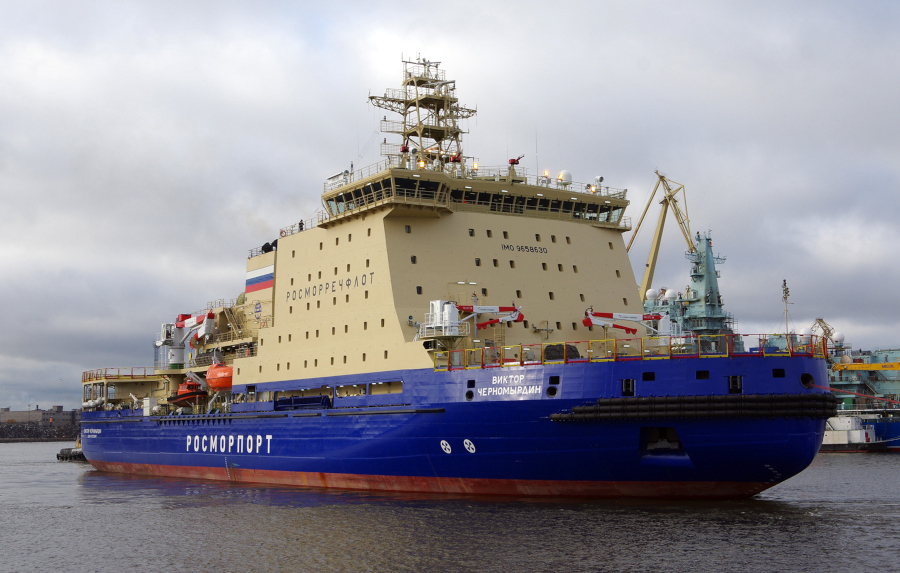 Named after the late Viktor Stepanovich Chernomyrdin, who served as the country’s Prime Minister from 1992 to 1998, the vessel was built by United Shipbuilding Corporation’s (USC) Baltic Shipyard and fitted out at USC’s Admiralty Shipyard in Saint Petersburg. Construction of the deckhouse, which weighed approximately 2,500 tonnes, took place at German shipyard Nordic Yards Wismar (since renamed Lloyd Werft Wismar).

Viktor Chernomyrdin boasts a length of 146.8 metres, a moulded beam of 29 metres, a minimum draught of 8.5 metres, a maximum draught of 9.7 metres, and a displacement of approximately 19,070 tonnes. Because the vessel’s draught is variable, it can sail in inland waterways and other shallow areas aside form its primary area of operations that encompasses the Baltic Sea and the Gulf of Finland.

The vessel is intended to provide icebreaking and escort duties in support of Russian merchant ships that would otherwise experience difficulty sailing through frigid waters.

The icebreaker has onboard space for 38 crewmembers and up to 90 additional personnel who will undertake various other tasks such as scientific research. Over 300 square metres of space for laboratories are available within the massive superstructure while the open deck can accommodate various cargo, a specialised diving chamber, or standard containers that house facilities such as workshops and support systems. 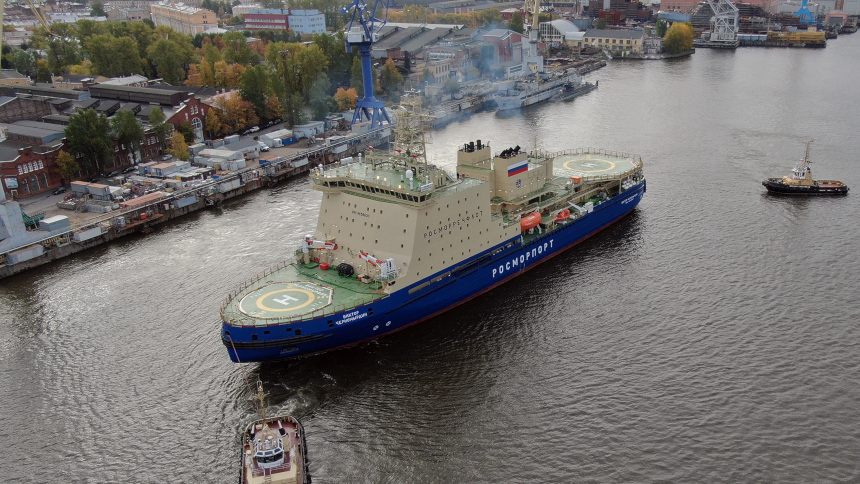 The icebreaker is fitted with a 10MW motor with a centreline shaft and two ABB VI1600 7.5MW azimuth thrusters. The propulsion motor and the onboard systems draw electrical power from a quartet of medium-speed diesel generators that each produce 8,700 kW.

The azimuth thrusters provide the vessel with improved manoeuvrability compared to other diesel-powered icebreakers in addition to enabling it to achieve a maximum speed of 18.3 knots and a sustained icebreaking speed of two knots in surface ice up to two metres thick, though operations are still possible in three-metres thick ice in Arctic and Antarctic waters thanks to the Russian Maritime Register of Shipping’s Icebreaker8 notation. This capability will be put to good use in 2022, when the vessel embarks on the ArcOP scientific expedition to the higher latitudes of the Arctic Ocean.

A range of over 36,000 kilometres, or an endurance of 60 days, can be attained when sailing at a cruising speed of 15.8 knots. Also, the vessel is designed to continue operating even when outside temperatures drop to –35 degrees Celsius.

Because of the high degree of onboard automation incorporated in the bridge controls, the massive vessel can be operated by just one crewmember in certain instances. A DP2 system and a pneumatic flushing system designed to prevent ice crusting on the hull have been fitted as well.

Although designed primarily for icebreaking, Viktor Chernomyrdin will also be used to perform secondary functions including search and rescue, towing of vessels in distress at sea, firefighting, oil spill response, and support for scientific expeditions as well as offshore and subsea installation works. For firefighting duties, the vessel relies on three foam/water monitors.