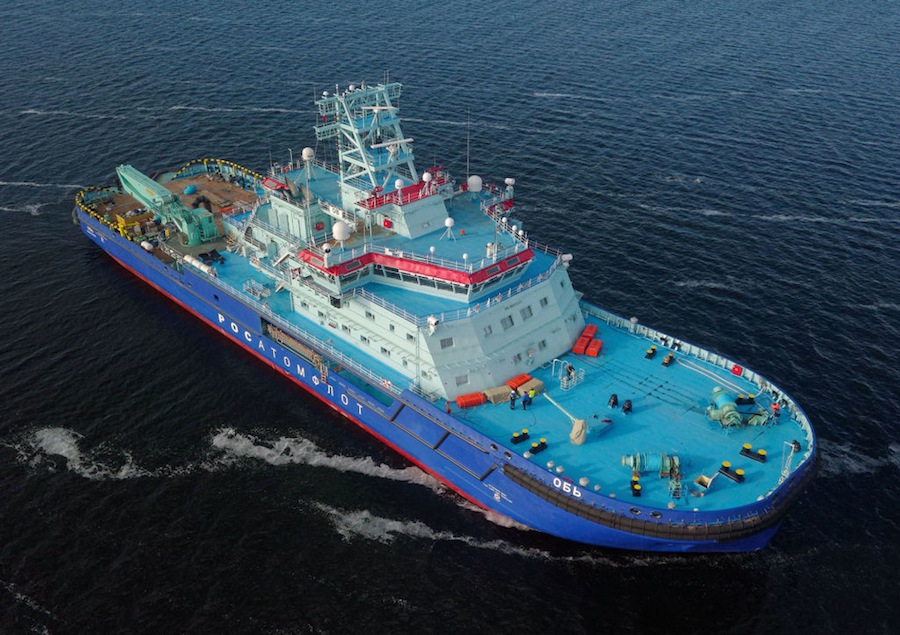 The 12-megawatt diesel-electric port icebreaker Ob has been delivered to FSUE Atomflot at Russia’s Vyborg Shipyard. The vessel is stationed at the Sabetta LNG terminal in the Gulf of Ob where she will provide icebreaking assistance to LNG carriers transporting natural gas year-round from the Yamal Peninsula.

Rosatomflot’s first non-nuclear icebreaker escorts vessels carrying liquefied natural gas in the approach channel and in the water area of ​​the port of Sabetta on the Yamal Peninsula, where a plant for liquefying natural gas is being built – the Yamal LNG project.

In 2012, Aker Arctic began developing the port fleet for Sabetta LNG terminal in co-operation with Yamal LNG. The initial evaluation included three alternative designs for the port icebreaker: a conventional design with two azimuthing propulsion units in the stern; an asymmetric oblique icebreaker with three thrusters; and a novel concept with two propulsors in both bow and stern. It was determined that the most suitable port icebreaker design for the heavy brash ice conditions prevalent in the Arctic LNG terminal would be the quad-screw variant. Initial technical development of the design began with the preparation of the tender design in 2013. Following the selection of Vyborg Shipyard as the builder and FSUE Atomflot as the operator of the new port icebreaker, Aker Arctic developed the final contract design and carried out ice model tests in 2015. During this time, the design gradually evolved from the initial concept towards the final design based on main equipment selection as well as close co-operation with the future owner and builder of the vessel.

Following the signing of the shipbuilding contract in April 2015, Aker Arctic continued with the development of final technical design documentation, which was submitted to the Russian Maritime Register of Shipping (RS) for approval. This basic design documentation also formed the basis of workshop design at the shipyard. 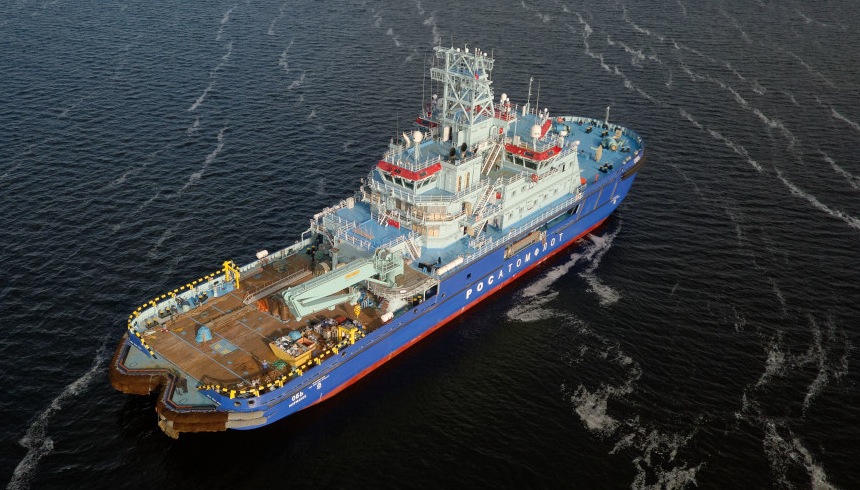 The keel of the port icebreaker was laid at Vyborg Shipyard in September 2016. Aker Arctic continued providing technical support during the construction of the icebreaker; for example, strength and stability calculations for the intermediate float-out where the partially-assembled hull was moved onto the shipyard’s semi-submersible barge for final hull assembly and outfitting. The official launching ceremony took place in September 2018 and the vessel left for first sea trials in the Gulf of Finland in September 2019.

The design incorporates many advanced features from general design to individual technical solutions, giving this relatively small icebreaker exceptional operational capability in the difficult ice conditions in the Arctic LNG terminal of Sabetta.

Ob has a diesel-electric propulsion system consisting of four ABB Azipod ICE 1400 propulsion units: two in the bow and two in the stern. This propulsion configuration, which has previously not been used in any icebreaking vessel, was selected to provide maximum operability in thick consolidated brash ice that forms in the harbour basin.

Despite having a total propulsion power of just 12 megawatts (16,000 shp), Ob can break up ice up to 1.5 metres thick in both ahead and astern directions, an unprecedent icebreaking capability for such a small vessel. In addition, the system components have a smaller footprint compared to a traditional alternating current (AC) system, saving space within the already compact machinery spaces.

Despite featuring many “firsts” in its machinery systems, Ob is designed to operate in the harsh Arctic winter conditions with ambient air temperatures as low as −50°C and provide safe and comfortable living and working conditions for the crew through the polar night.

For a comfortable crew stay on the vessel, Ob features a crew cabin for 20 people, a crew cabin for eight people, a lounge/relaxation room, a sauna and a shower room with a swimming pool, a gym, an office, a conference room, a galley with food pantries, and a laundry room with pantry and dryer.