Written by Baird Maritime on July 10, 2019. Posted in Ausmarine, Search and Rescue.

Australia’s Queensland Boating and Fisheries Patrol (QBFP) Marine Animal Rescue Team (MART), within the state Department of Agriculture and Fisheries, is a workboat operator with a very specific mission, to help release entangled marine life from shark control nets. Baird Maritime recently interviewed Queensland Shark Control Program Manager Jeff Krause about the team’s operations, and a recent event where a passing humpback whale became caught in a shark net off the coast of Broadhead, and had to be rescued. 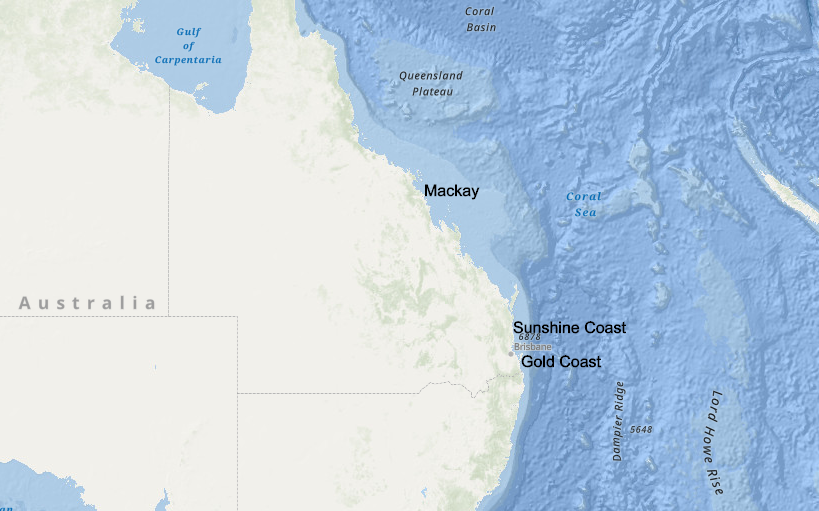 The MART has a dedicated fleet of six inflatable boats based at the Gold Coast, Sunshine Coast and Mackay. If required, support vessels are sourced from the wider QBFP fleet and contractors engaged in the department’s Shark Control Program (SCP).

MART vessels are built to survey with key considerations being stability, working room for a crew of three and the ability to launch from surf beaches in all conditions. 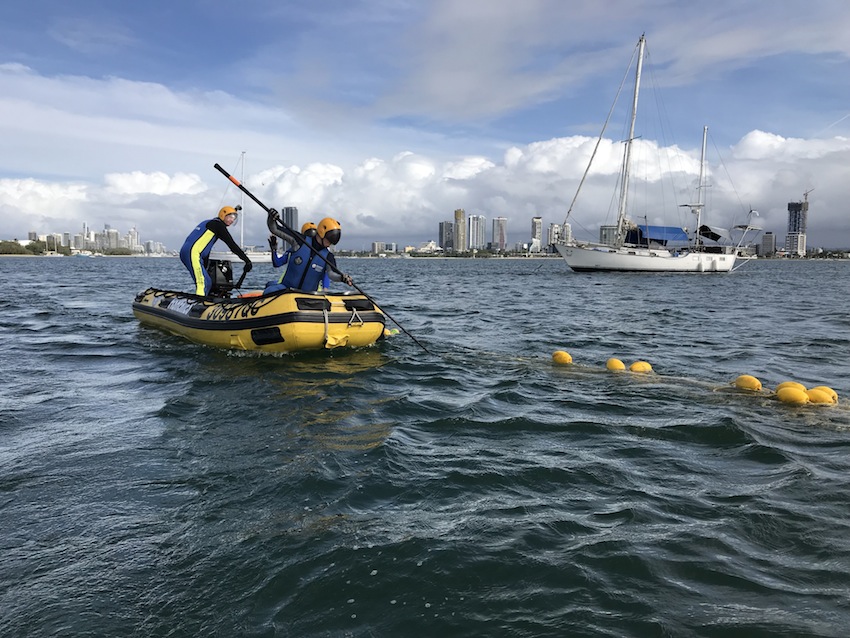 Rescuing whales entangled in shark nets is dangerous work, starting from the time the boat is launched.  Crossing the surf zone in an inflatable boat can be hazardous. Before each whale migration season, crews undergo an intensive four-day training course involving theoretical and practical components. Teams also undergo surf zone training during the whale season.

After confirming an entanglement, crews are assembled and, if necessary, extra staff are called in. The prevailing weather and sea conditions are assessed, crews don personal protection equipment (PPE) and conduct self-checks and ensure equipment for every contingency is carried. 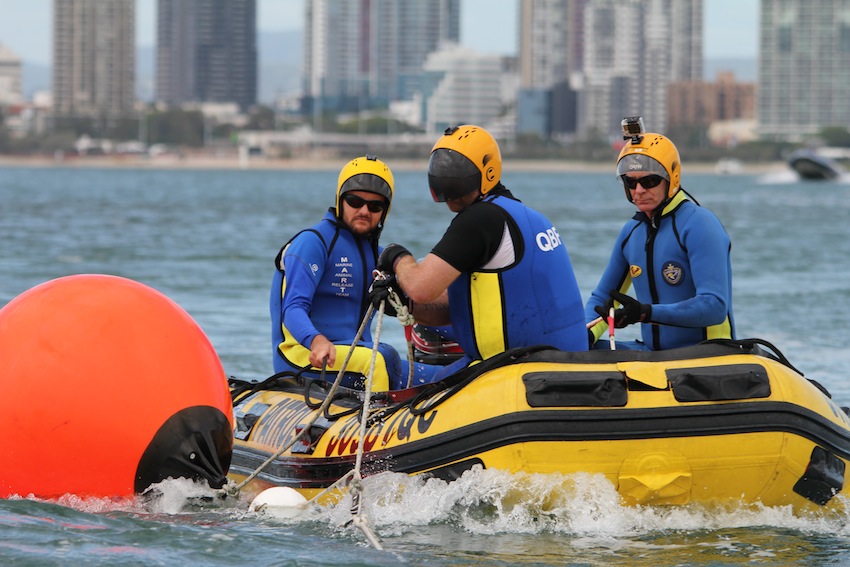 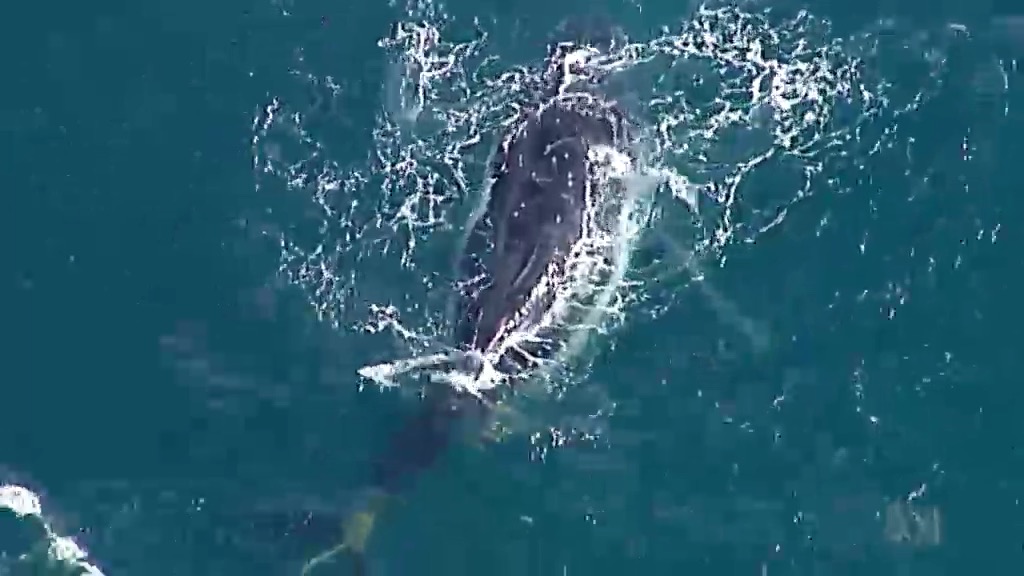 A total of six QBFP MART crew responded in a 4.2 metre inflatable boat and the six metre RHIB patrol support vessel, Mako. They were supported by the shark contractor’s vessel and a crew from Sea World.

The release was complicated by gusty 15-20 knot south-easterly winds and choppy sea conditions. A large northerly swell, producing surf break sets of more than 2.5 metres, and two sandbanks had to be navigated to reach site. 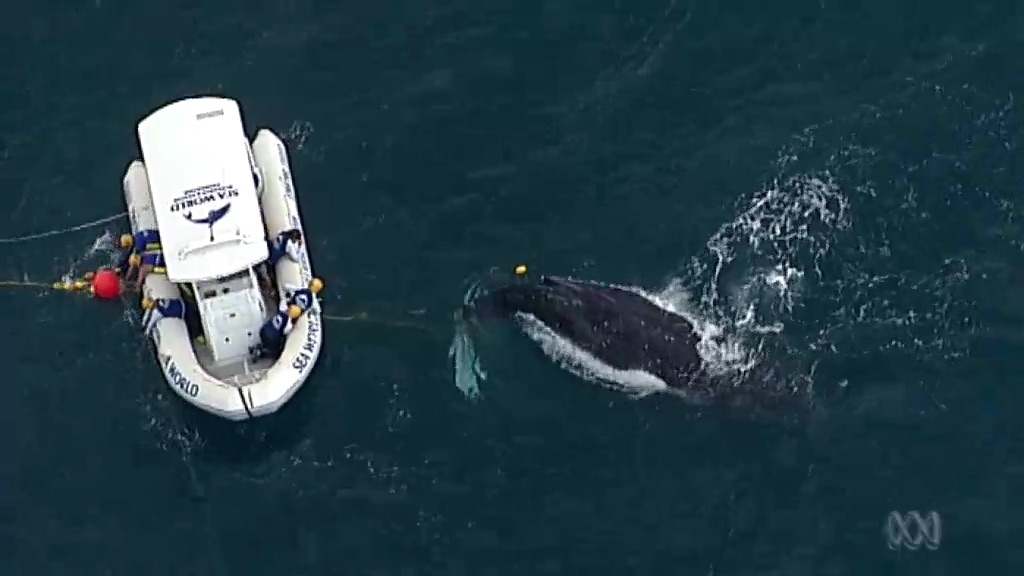 First on the scene at approximately 09:10 was the MART crew in the inflatable boat and they immediately assessed the animal’s condition and the extent of its entanglement.

The whale, approximately 8-10 metres long, was entangled in the shark net. Fortunately, the whale had minimal physical injuries and was in a low-risk position on the surface where it could breathe. The whale could safely maintain this position for an extended period without the risk of drowning. 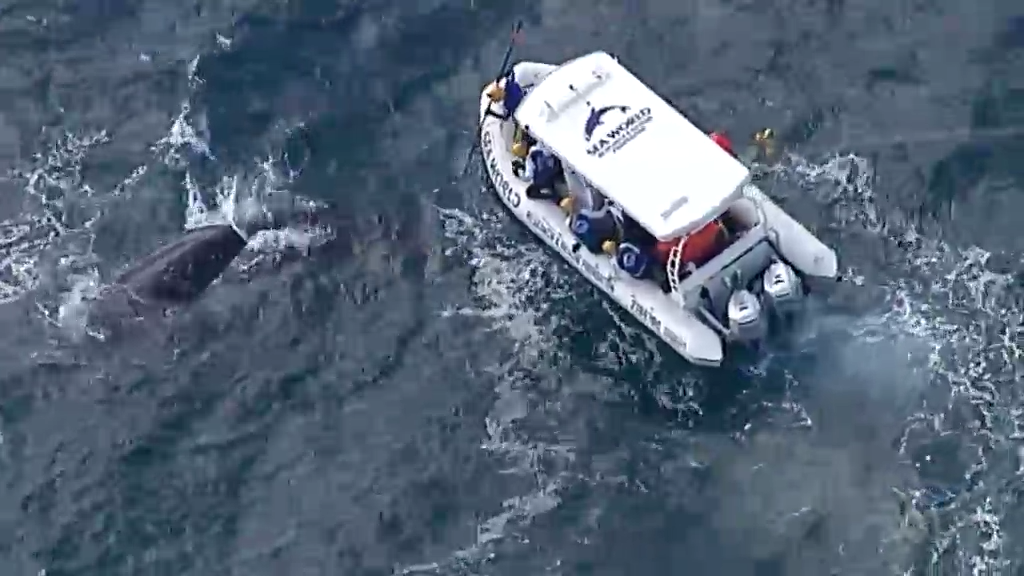 Sea World’s vessel arrived shortly after and the MART briefed them on the situation and agreed on the process for the release operation.

As a result of rough sea conditions, a MART crew member transferred to the Sea World vessel to unpick the netting as the twin motors on that boat provided better manoeuvrability in the conditions. 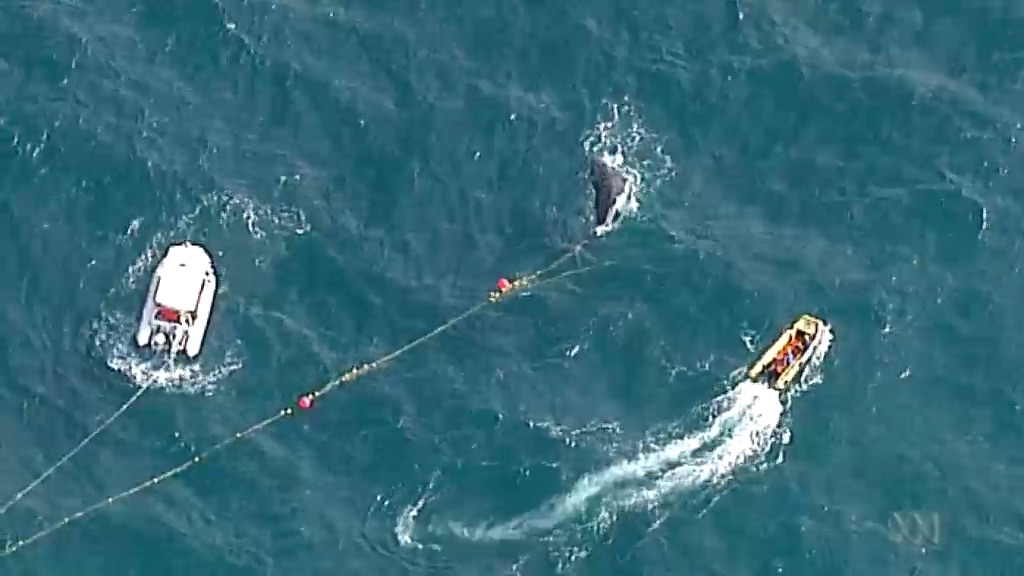 The QBFP support vessel Mako arrived on the scene to provide support with additional equipment including floats, kegging and telemetry.

The final pieces of net and rope were removed and the whale freed at approximately 11:35. 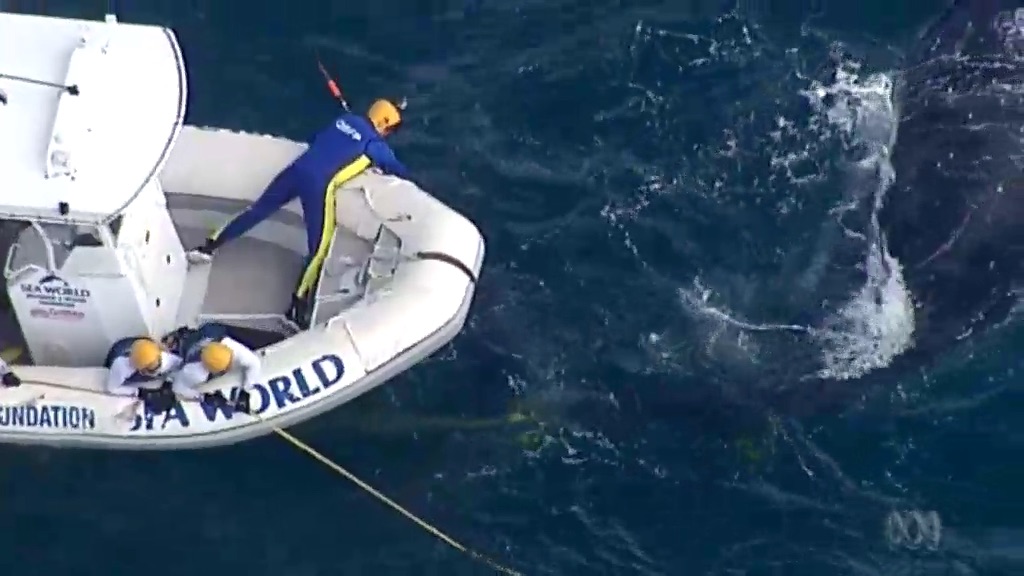 The whale was monitored and remained on the surface for at least 10 minutes before swimming away to the east.

The state of Queensland now has more than 33,000 whales passing along its coast every year, and whale entanglements are rare events. The Queensland Government’s Shark Control Program has a record dating back to 1962.

According to Jeff Krause, since 2006, out of the hundreds of thousands of migratory trips, only 52 whales have been entangled in shark control program apparatus and 50 of those were successfully released.