Written by Baird Maritime on June 3, 2021. Posted in Search and Rescue. 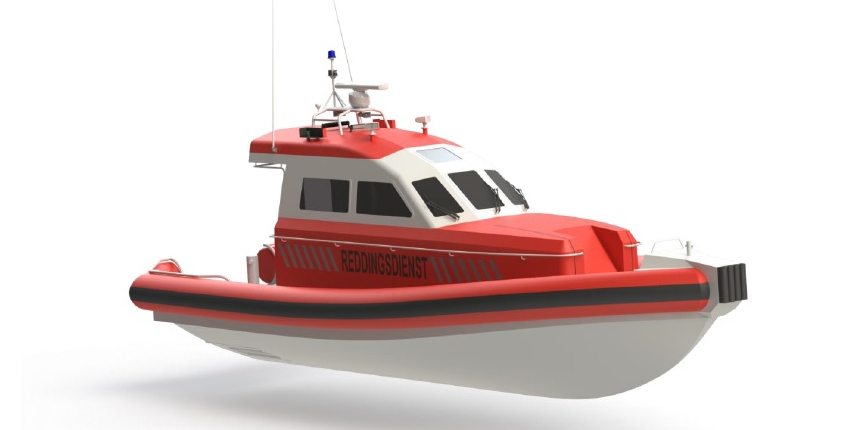 A new all-weather, self-righting lifeboat is presently being developed for future use by the Blankenberge Volunteer Sea Rescue Service (Vrijwillige Blankenbergse Zeereddingsdienst; VBZR), a search and rescue (SAR) organisation based in the West Flemish coastal town of Blankenberge.

The vessel will be designed and built by Netherlands-based Habbeke Shipyard with construction scheduled to commence in the fourth quarter of 2021.

The boat is being developed in response to the VBZR’s need for a vessel that guaranteed reductions in vertical acceleration, noise, fuel consumption, and emissions as well as improvements in towing capability as well as the safety and comfort of the occupants.

The cabin will be able to house a crew of six plus an injured individual on a stretcher while the vessel itself will have space for up to 50 other people.

A deep-V hull will ensure improved seakeeping ability and performance while the length of the forefoot will be balanced to reduce the risk of broaching in following seas and to ensure enough reserve buoyancy in case of bow diving.

Two MAN i6 633kW main engines with individual fuel tanks will drive a pair of Kongsberg KaMeWa FF375S waterjets to propel the craft to speeds of up to 40 knots.

The engine room and the jet room will be separated by a watertight bulkhead. Although Habbeke said the engines are massive for a lifeboat this size, there will be ample space around each of the engines for maintenance.

Deck equipment will include fore and aft towing bitts and an anchor. Hand grips will be installed to enhance safety even in heavy sea states.

The boat will operated primarily in the waters of the North Sea between Ostend in Belgium and the Dutch town of Cadzand.