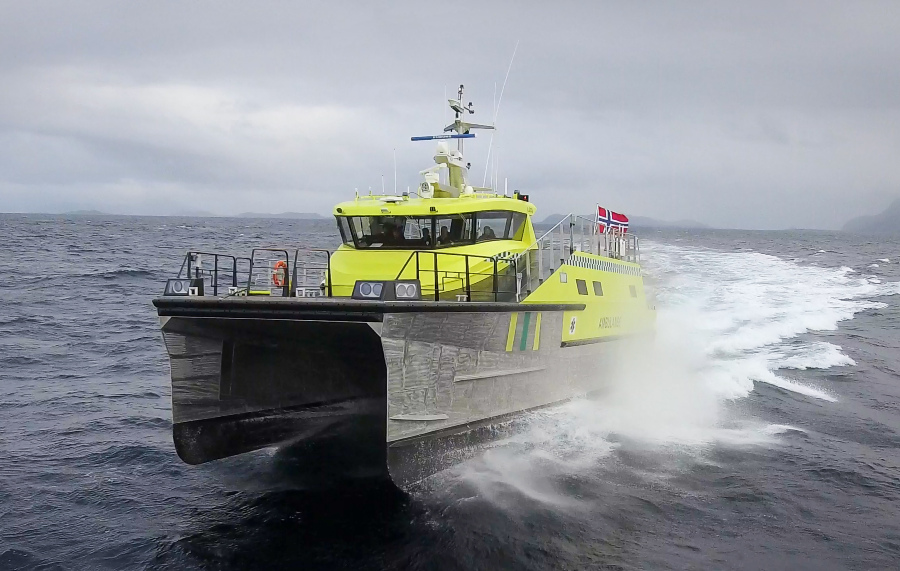 The largest ambulance boat ever built in Norway was recently handed over to its new owners.

Built by Ålesund-based shipyard Maritime Partner for the Loppa Legeskyssbåter ambulance boat service in the far northern city of Øksfjord, the aluminium-hulled Thea Jensen will be operated in the area of Loppa, Hasfjord, and the outer Altafjord under an eight years’ firm contract with Finnmark Hospital in Hammerfest.

The newbuild has an LOA of 21.9 metres, a beam of 7.8 metres, and two Volvo IPS 1050 engines that deliver a speed of 30 knots. Power for all onboard systems is provided by generator sets supplied by Fischer Panda.

Thea Jensen will be used primarily to serve the residents in remote areas where transport to hospitals by land is not feasible due to the roads being impassable during winter. Also, the abundance of fjords means that sea transport would be the most effective way of bringing the area’s residents to better equipped facilities elsewhere should they require medical treatment beyond what the local community health offices could provide.

The boat had been specifically designed for operation in Loppa, which is known for having the harshest environment of any Norwegian area north of the Arctic Circle. During the winter, the area experiences snow and icy storms straight from the North Atlantic in addition to darkness that could last a full 24 hours. Thus, great effort was exerted in making sure that the vessel would have all-weather capability so that it would have little difficulty navigating the region’s rough, frigid seas and transporting patients even during the coldest months of the year.

The ambulance boat also needed to be fuel-efficient, as endurance is considered a key attribute when operating in freezing temperatures far from the coast. Foils fitted to the twin hulls have proven during recent trials to be capable of reducing vertical acceleration by as much as 25 per cent whenever the vessel sails through rough waters. This then leads to reduced fuel consumption since there would be a reduced need for engine power to keep the vessel as level as possible while underway. 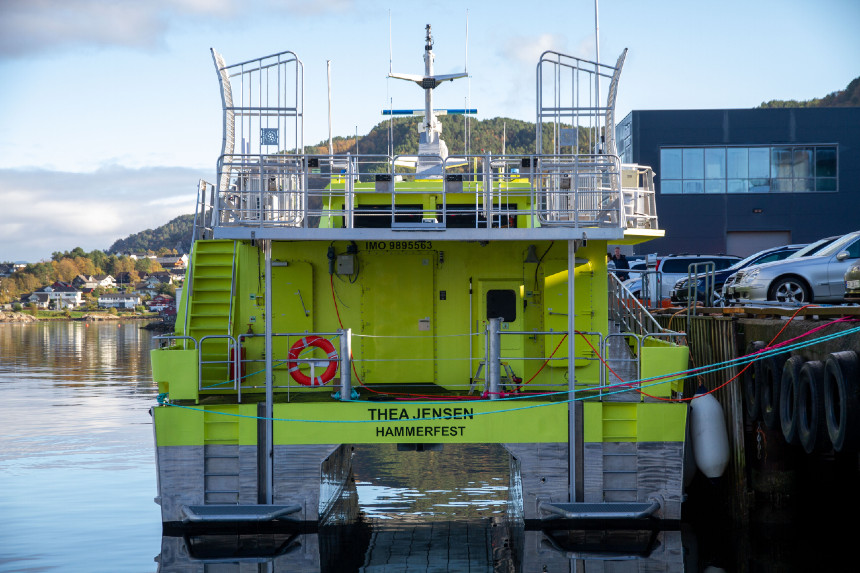 In instances wherein airlifting of patients becomes necessary due to time considerations, the boat is equipped to conduct last-minute helicopter transfers even under adverse weather conditions out at sea.

Thea Jensen is large enough to house a fully equipped emergency room with space for two stretchers, making it possible for efficient treatment to be administered to patients even while in transit. Due to its soundproofing, the emergency room is also the quietest area on the vessel, ensuring that doctors and nurses can treat patients undisturbed.

Forward of the emergency room is a spacious passenger lounge with eight seats as well as a galley plus two cabins that serve as rest areas for the crew.

The spacious bridge contains a small office and four Recaro Northsea suspension seats. The control console has screens showing live feeds from an array of onboard CCTV cameras and a night/ice camera that aids in navigation during the winter.

“The biggest challenge we faced was in coming up with a vessel that could safely transport patients while being capable of year-round operations that far north,” Maritime Partner explained after Baird Maritime asked about Thea Jensen’s design process. “Hull shape and freeboard both needed to be optimal to enable the vessel to ride out the winter storms that are typical in the region, and we feel we have succeeded in this regard.”

The builder added that incorporating the emergency room had also presented a challenge, especially since that specific area of the vessel needed to be comfortable and quiet enough for patients and medical personnel regardless of the weather and the environment outside. Frequent consultation with the owner – who has had years of experience operating in that same harsh environment – solved this problem, as it provided the builders and designers with valuable insights on heating, insulation, and soundproofing.

As an emergency response vessel, Thea Jensen also comes with a full suite of safety equipment for the crew as well as patients. These include a Zodiac life raft, Sea Life life jackets, Ydra firefighting pumps, and engine room firefighting equipment supplied by Novec. 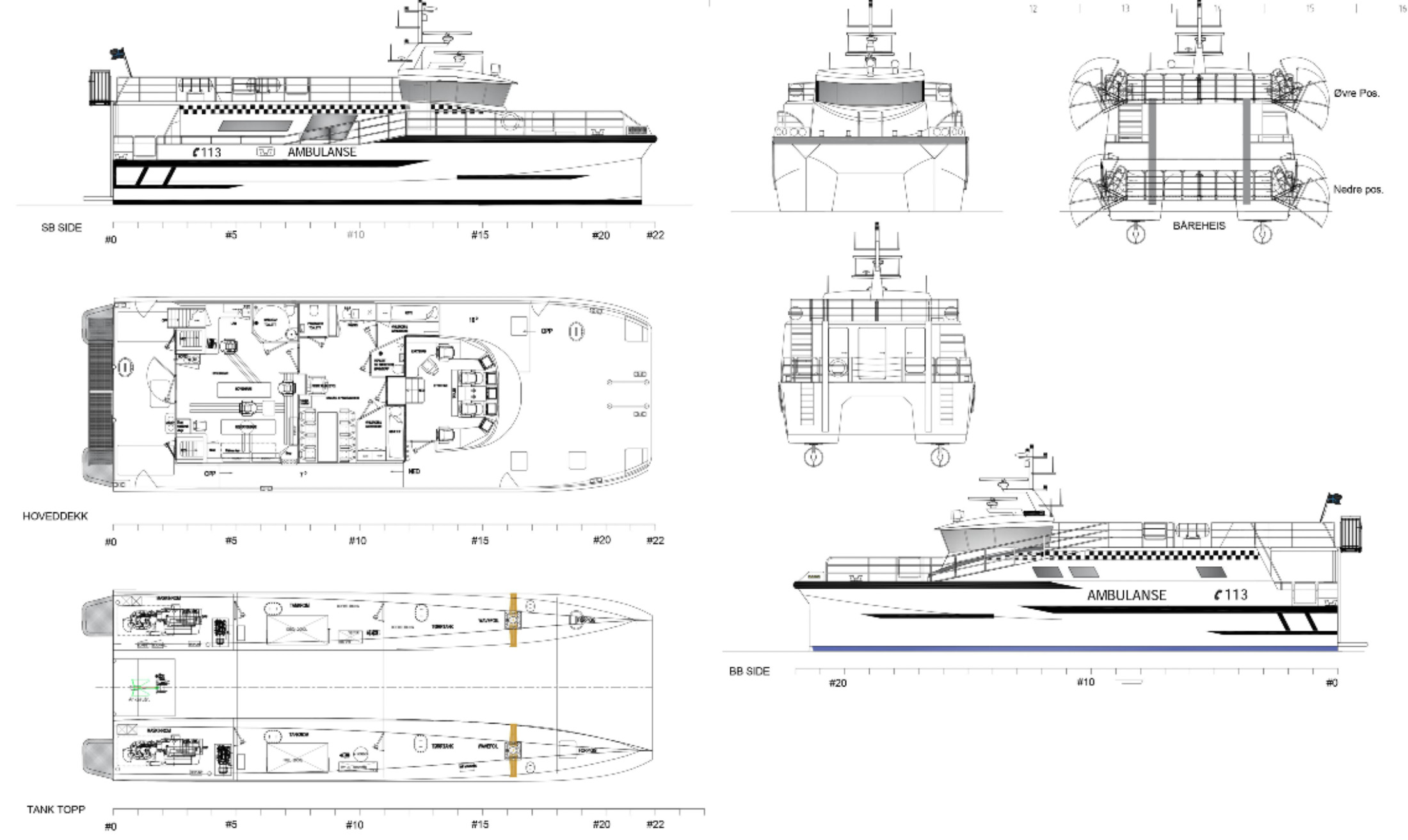