The newbuild has an LOA of 78 metres, a moulded beam of 12.8 metres, a moulded depth of 5.5 metres, a design draught of 3.4 metres, a full load displacement of approximately 1,450 tonnes, a range of 1,000 nautical miles, and a speed of 18 knots. It is currently assigned to the CMSA’s branch whose area of responsibility encompasses the waters within and around the southeastern metropolis of Shenzhen that connects Hong Kong with the Chinese mainland.

Shenhai 01 is notable for being the first hybrid electric search and rescue (SAR) vessel to sail under the Chinese flag as well as one of the first Chinese government-owned vessels to be powered by lithium-ion batteries.

The hybrid propulsion system consists of three diesel engines and two battery packs, the latter with a total capacity of 1,680 kWh. The batteries have a maximum endurance of three hours and are to be used in place of the diesel engines when operating in environments that have been affected by leakages of LNG or other hazardous gases.

The entire hybrid propulsion arrangement is controlled by an integrated power and energy management system (PEMS) that had been supplied by ABB to optimise the vessel’s energy use. ABB claims that the PEMS not only increases vessel powerplant performance and diesel engine efficiency, but also helps ensure zero-emission operations when in fully electric mode. 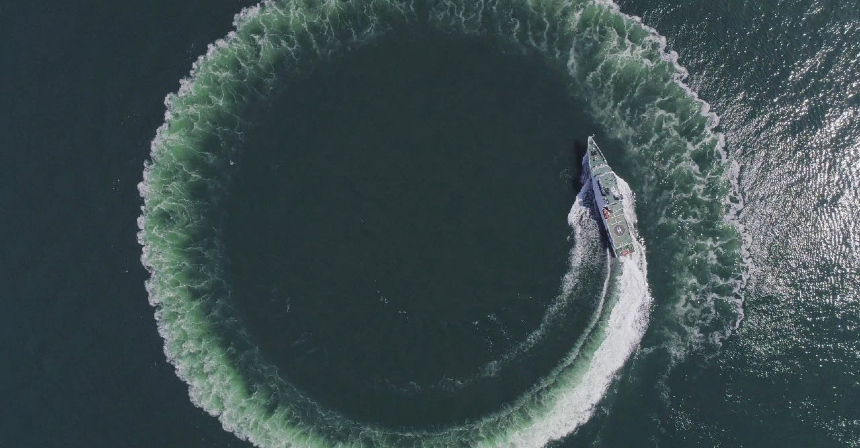 ABB had also supplied Shenhai 01’s two electric-powered azimuth pod thrusters with a combined power of six MW and which can rotate 360 degrees for improved manoeuvrability. The thrusters have also been proven to be capable of reducing fuel consumption by as much as 20 per cent compared to traditional shaftline propulsion systems.

Shenhai 01’s operations will be remotely monitored and supported by ABB’s own global network of collaborative operations centres. This means that any anomalies with the vessel’s generators, batteries, and propulsion units can be promptly detected, diagnosed, and corrected by ABB specialist personnel to guarantee minimal downtimes. The CMSA crew on board are then freed up to focus more on ensuring their own readiness – as well as the vessel’s – to be able to adequately respond to emergencies on short notice.

Some of the onboard space has been allotted for a medical bay with equipment as well as cabins designed to temporarily house additional personnel such as rescued incident survivors.

The interior has also been equipped with a cabin micro-positive pressure maintenance system to provide the crew and the other occupants with an additional layer of protection against hazardous gases. Huangpu Wenchong claims that Shenhai 01 is one of the first vessels in the world to have such a system installed.

Although intended primarily for SAR missions, the vessel has also been designed to function as a command and control platform thanks to an intelligent integrated information system capable of generating a three-dimensional situational map that also contains nearby landmarks, structures, and even air, land, and sea vehicles. It is designed to provide a more detailed virtual picture of the environment around the vessel, thus allowing the crew to coordinate more effectively with other CMSA assets as well as assets of other responding agencies when dealing with emergencies.