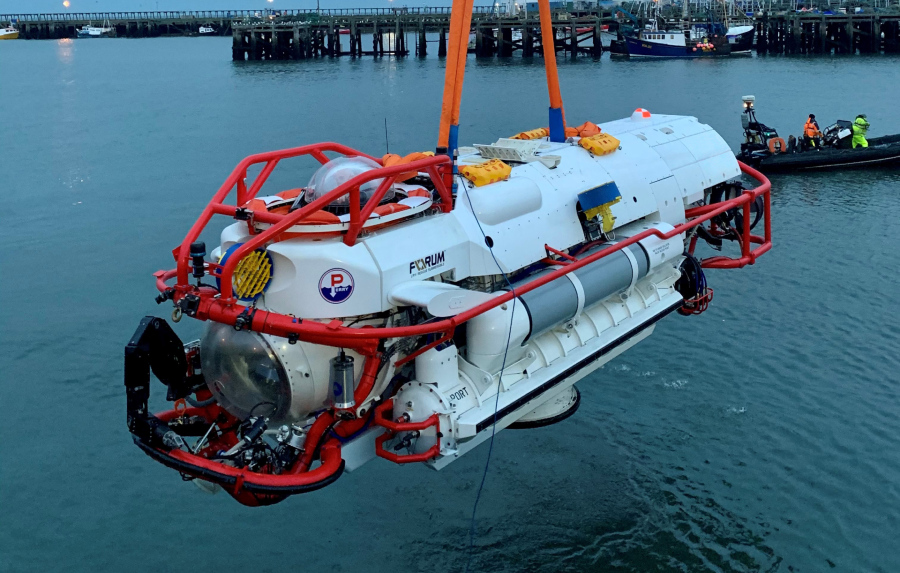 The Vietnam People’s Navy will soon begin operational deployments of a new deep-diving submersible capable of rescuing crews of submerged submarines in distress.

“The SRV was developed to be capable of rescuing up to 17 people at a time and operating at depths of up to 600 metres,” FET told Baird Maritime. “It also has increased power and an advanced auxiliary thruster control system that allows for speeds of up to four knots, enabling it to operate even in high currents.”

The designer added that the 10- by 3.2-metre SRV can attach itself to submarines at highly precarious angles above 40 degrees and can detect distressed submarines more quickly compared to similar vessels, thanks to a suite of advanced sensors including a doppler velocity log, a fibre-optic gyroscope, a sonar, and depth sensing equipment.

“All sensors and sonar systems are fully embedded into FET’s software to deliver advanced functionality, including auto depth, auto heading, and autopilot. The latter function utilises an electric propulsor pivot mechanism and is unique to the LR-classed SRV.”

“We learned early on that the build process cannot be automated. Due to the SRV’s shape and the limited access in and around the vessel, construction needed to be done by hand. Also, all aspects of the design and build needed to be witnessed and approved by LR.”

The decision to do away with automation in the SRV’s construction proved to be a prudent one, and FET has claimed that the vessel is due to receive full LR class certification following its sea trials, which are scheduled to commence within the second quarter of 2021.

The SRV is designed to be operated by two pilots. One pilot sits up front in the command module and manoeuvres the craft while the second sits towards the rear of the same compartment and operates the majority of the sensors and the life support system and also moves ballast water as required.

The other compartment of the SRV is the rescue chamber, which takes up the rear two-thirds of the craft. A third crew member, the rescue chamber operator (RCO), is located here and is tasked with preparing the chamber for the rescue, operating the rescue hatch, and assisting with the safe transfer of 17 survivors (maximum per rescue trip).

“The RCO also needs to assist and communicate with survivors who may be injured or in an unknown mental state due to being trapped or exacerbated by toxic gases or decompression sickness,” added FET.

Housed in cylindrical pods on each side of the SRV are rechargeable energy storage systems (RESS), which FET said are based on the most suited lithium chemistry available to provide maximum performance, lifespan, and safety. The RESS is made up of six batteries to provide energy for the propulsion and life support systems as well as to provide redundancy for each of these critical systems.

“The majority of equipment on the SRV is provided in pairs to provide a level of redundancy,” the designer told Baird Maritime. “Power conservation and redundancy were primary considerations during the engineering phase. The SRV therefore incorporates many advanced technologies to conserve power and provide back-up in the event of an onboard failure.”

The battery charging system was designed to be a self-contained unit suitable for mounting in a container on deck – the unit incorporates graphical user interfaces mirrored in the SRV and utilises push-button operation. This makes operation simple but effective, and safety is further enhanced thanks to numerous safety systems built into the background.

The unit has six individual battery charging channels, allowing all of the batteries to be charged simultaneously. Each channel is monitored by a line integrity monitor for added safety.

The SRV is designed to operate as a part of a complete submarine rescue system that also includes a remotely operated vehicle (ROV) for surveying crash sites and a hyperbaric chamber on the mothership to aid in depressurising rescued crews as well as the SRV’s operators.

“Upon arrival at the site of the distressed submarine,” said FET, “communications are established with the crew. Depending on the reason for the distress, the ROV can be deployed to resolve the situation. This could be by simply cutting the submarine free from entanglement (typically fishing nets) or posting rescue pods that can contain nourishment and medical supplies for sustaining the distressed crew while they await rescue.”

FET added that even if the ROV cannot provide assistance, it would survey the crash site and record data including the submarine’s orientation on the seafloor, obstructions, currents, and visibility. It can also leave a locating “pinger” so that the submarine can be located quickly on succeeding visits to the crash site. Any information gathered by the ROV will be utilised by the SRV team to set up for the actual rescue operation.

“When the submersible is first deployed, it will contain life support for up to 108 hours for 20 personnel on board, which endorses the fact that every possible rescue scenario has been accounted for.”

Utilising the reconnaissance information provided by the “first response” ROV as soon as it becomes available, the SRV is deployed and proceeds towards the submarine. However, since the SRV is equipped with a complete suite of advanced navigation and communication technologies, it can locate the submarine even without the data supplied by the ROV.

Once the submarine is located and any obstructions are carefully removed, the SRV will then carefully navigate so that the transfer skirt – a hemispherical weldment underneath the rescue vehicle at the base of which is a rubber seal to facilitate the removal of water – is above the rescue hatch on the submarine. Once in position, and generally forward into the current, the submersible is lowered until the skirt seal is aligned with the rescue hatch and the seal becomes energised. Water is then pumped out using a pair of ballast pumps.

“With the seal energised and the water removed, the SRV and the submarine effectively become one solitary unit with depth pressure providing the physics to facilitate safe transfer and the SRV held to the submarine with over 800 tonnes at 500 metres.”

A communication protocol is then followed to ascertain details including the potential for pressure differential or the presence of toxic gasses, but ultimately both hatches are opened, and the survivors are transferred into the SRV for safe recovery back to the mothership.

Once on deck on the mothership, the survivors are treated accordingly and where necessary, they are transferred under pressure into the onboard hyperbaric chamber to be supported by medical personnel. During the transfer of personnel, the critical breathing air, oxygen and battery systems are recharged if required before the SRV is re-deployed to repeat the process until all survivors are safely recovered from the submarine.